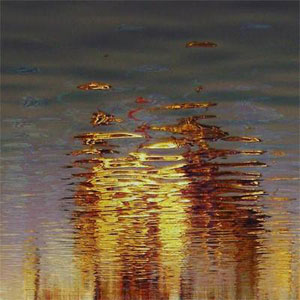 Montreal resident Steve D’eon’s first release arrives on the highly respectable Hippos In Tanks label like a hippy Dam-Funk, stripped down LA synthpop meets New Age meditation tapes and ’90s B-Side remixes, all recorded in a bedroom. Smatterings of Eastern-influenced drone-pinned improvisations rub up against DX7 presets quite effortlessly, and while piano house and moody Casio hip-hop are flirted with to less success, a solid boogie influence underpins the strongest offerings very well. d’Eon’s singing voice, although unsteady and reedy, also stands as a strength. Possessing inherent character that’s difficult not to warm to, it’s unfortunately a little difficult to distinguish in the mix. His lyrics too, sometimes cynical, sometimes naive, could benefit from more clarity.

Seven tracks puts Palinopsia in the mini-album category and is a good move, as each track offers something individual, with no weaker material threatening to become filler. d’Eon is a very promising songwriter, with the surprising ability to inject angular funkiness into every offer on the release. The almost-demo tape quality of the release will appeal to a lot people, but arguably this betrays something that could be stronger. Although not necessarily viable as an independent producer, d’Eon could definitely benefit from a bigger-budget production environment to follow a grander vision. If let loose with more studio gear it is very likely he will nail something distinctly memorable.

d’Eon is therefore an artist worth investing interest in and following the development of. Palinopsia is a fair start, but it is saved by flashes of inspired detail that are undeniably interesting. Hopefully within a year or two he could be showing us a new way forwards with a bolder, more developed character.