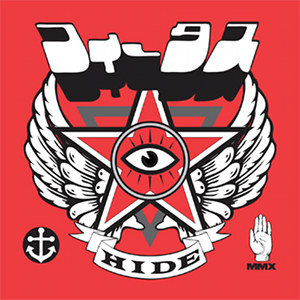 Where do you begin with a character like Jim ‘Foetus’ Thirlwell? Born in Australia, heinitially found infamy in the inordinately sexy and sleazy New York of the early 1980s, a scene containing such luminaries as Michael Gira, Lydia Lunch, Richard Kern and fellow Australian Nick Cave. Not one for sticking religiously to one identity, he released records as You’ve Got Foetus On Your Breath, Scraping Foetus Off The Wheel, The Foetus Symphony Orchestra (featuring Lydia Lunch) and, err, Wiseblood, with Young Gods main man Roli Mosimann.

Like a freakish ginger amalgam of Mike Patton and Justin Broadrick, Thirlwell has a bunch of musical identities on the go (including Manorexia and Steroid Maximus) and has recently moved into soundtrack work: in 2009, he released a collection of work he did for the Venture Bros. animated show. Not having seen Venture Bros., your reviewer nevertheless rated the accompanying album very highly. This is largely unsurprising, considering how soundtrack-influenced a record like Steroid Maximus’ Ectopia (released 2002, on Patton’s Ipecac label) was.

One question surrounding the release of this record, only the second album by Foetus proper since 2001, is how well this particular identity has retained its character. Granted, Foetus has developed over the years (and decades; the moniker debuted in 1981), but it was always a risk that the recent yen for soundtracking would overtake the industrial, and later industrial rock, on which he made his name. To be fair, there aren’t many folk making industrial rock nowadays, so maybe that’s for the best. Lest we forget, Trent Reznor, the man once unfairly maligned of ripping off Thirlwell, has also left the brutalism of industrial (metal) in favour of smooth production and more cinematic fare.

Funnily enough, this album is actually pretty much a soundtrack, albeit to a film yet to exist. At first, however, it’s almost an opera. ‘Cosmetics’ opens the album in stunningly deranged fashion. Sounding like Armando Iannucci’s recent Skin Deep opera, except actually entertaining, it’s a mini-epic focusing on the increasingly common phenomenon of surgical body alteration. A number of songs on the record feature quasi-operatic guest vocals, but they are most prominent on this cod-opera. I say ‘cod-opera’, as it’s not often in actual opera one hears rock drumming. It works perfectly well in this context, sounding like a brilliantly refreshing, massive, rock song, albeit with massed strings replacing big guitar. It’s one of those songs everyone should hear, regardless of generic bias.

So good is ‘Cosmetics’, in fact, that it threatens to overshadow what follows. It sounds as though it should have been the record’s centrepiece, the decision to open with it narrowly justified by placing the similarly eight-minute-plus ‘You’re Trying to Break Me’ near the end, its Punisher-style themes recalling Megadeth’s classic ‘Holy Wars/The Punishment Due’, and doing little to dissuade me from considering Thirlwell the industrial Dave Mustaine. The actual centrepiece, ‘Oilfields, is a simultaneously brooding and humorous musing on an impending apocalypse, performed at a crawling tempo with Queensrychian choral backing: “the rapture will come today / did you get the communiqué?”

Songs that initially sound like they don’t belong, even cheesy, at first soon settle in after four or five plays. ‘Paper Slippers’’ late-Beatlesy melody and dynamic sounds at odds with ‘Cosmetics’’ exuberance, not to mention the relative vocal comedown from the professional singers to Jim’s inimitable vocal style. ‘Stood Up’ sounds oddly spiteful, emo even, coming from a middle aged cult rock legend. ‘The Ballad of Sisyphus T. Jones’, and its Western edge, may initially grate. All gradually reveal their charms, even if the lyrics at times seem like an afterthought, placed on record purely to remind us this is a rock album and not actually a soundtrack. However one may doubt the details of lyric or sequencing, the album works as a whole, tied together by segues like ‘Concrete’ and ‘Fortitudine Vincemus’.

After all is said and done, Thirlwell makes the agreeable choice of finishing with the most mellow song on the album: a blissed-out (strung-out?) slice of armchair dance called ‘O Putrid Sun (For Yuko)’. Overall, this is a success for the man: he’s balancing quantity and quality admirably, and this record’s very first song is better than the finest track from his last one, Love’s ‘Time Marches On’. That 2005 album was something of an anomaly, greys dominating the cover art, rather than the brash red and black with which Foetus has become synonymous. But then, everyone needs their disappointing album when it comes to a veteran musician. What is clear is it’ll take a cold soul to be disappointed with this piece of work.