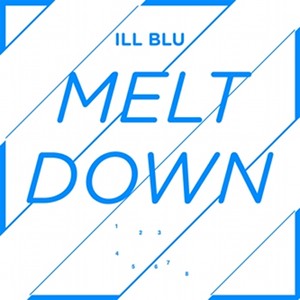 I know people slag off managers in music, but I can’t help thinking that if North London duo Ill Blu had one – or at least were better organised themselves – then they’d be as big as anyone to have come from the UK Funky scene right now.

In Funky’s breakthrough Summer of 2008, they produced the scene’s second biggest vocal hit after ‘Do You Mind’, the Princess Nyah-voiced ‘Frontline’. The next year, that track got a full release, and Ill Blu followed it with one that was almost as well-received, their remix of Shystie’s ‘Pull It’. Along with Roska, Cooly G and Scratcha DVA, they were the Funky producers getting played most outside that scene, and yet, even after a release on Hyperdub and an official remix for Hot Chip, they don’t seem there in the same way that their aforementioned three compatriots do.

Maybe this EP will change that. It should do; not only are ‘Meltdown’ and ‘Overdose’ killer tracks, they represent the accumulation of two running strands from the Ill Blu story to date. The stabbing charcoal drum hits of ‘Meltdown’ will be familiar to fans of the group due to a video of them making it that’s been doing the rounds for over a year, prompting much ‘will they or won’t they release it?’ speculation. ‘Overdose’ meanwhile, is an update of ‘Blu Magic’, probably the catchiest instrumental that the pair have made yet. As you can guess, it never got a full release outside of mix CDs, but ‘Overdose’ is even better than the track it apes; igniting that synth line with bubbling magnesium until it takes off towards the stratosphere.

‘Chelt’, the techno-tinged third track on the EP is easy to like and hard to love, but it would almost be obnoxious to counter ‘Meltdown’ and ‘Overdose’ with something of similar quality; both are club music of the absolute highest order.