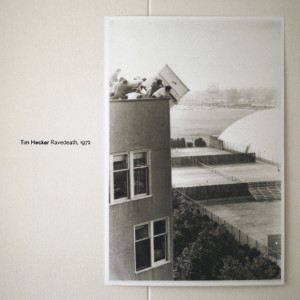 Sensual entropy. The arrival of a new Tim Hecker album is always a great moment for celebration and sometimes it’s a great album (Haunt Me Haunt Me Do it Again, Mirages and An Imaginary Country) whilst other times it’s a huge WTF moment. And like previous masterworks Radio Amor and Harmony in Ultraviolet, Ravedeath 1972 (and what a title that is) is a Hecker masterpiece.

There is a never-changing Tim Hecker sonic footprint that undergoes redefinition from work to work – something like the remains of William Basinski and a drumless My Bloody Valentine washing up together on an alien beach. It’s entirely fair to describe Hecker as a noise artist but these are the traces of noise that has long since drifted to the edges of the universe. These are thick choral textures that are paradoxically sparsely populated – volume brought under control evoking the elegiac and the melancholy. This odd emotional tightrope that Hecker walks so skilfully is why these minor textural reclassifications across his recorded history remain so compulsive – this is elegant sound entirely in the grip of rapture.

And so maybe with rapture in mind, Hecker and (noise pop star) Ben Frost decamped to a church in Reykjavik in July last year. Recorded practically in one day, Hecker utilised a pipe organ as the principle source of sound and then back to the studio where everything was disassembled reconstructed with Frost on engineering duties and some instrumental contributions. Mixing the sacred with the experimental in such an obvious fashion dances way too close to a dodgy precipice for my liking and I certainly have more than a lot of sympathy for Tony Herrrington’s recent criticisms of such practices. Such fears however are immediately washed away the moment you hit play.

Ravedeath 1972 is both Hecker’s biggest yet most intimate sounding album yet. It opens with ‘The Piano Drop’ to what sounds like a rave riff collapsing under a gargantuan cloud of distortion, the sound of a thousand cassettes hitting the sun. I was immediately put in mind of V/VM’s Death of Rave project but that’s soon dispelled as the three-part (aptly titled) ‘In The Fog’ drifts in. Possibly not surprisingly, the acoustic experiments in Iceland have resulted in a vast amount of space opening up in Hecker’s sound. The usual elements are in place – processed guitar, piano-like loops and glistening glissandi – tweaks and manipulation as always but there’s more room to breathe than before. And like the best ambient music, when the noise does come (and it does) you’re never quite sure how it (or you) suddenly ended up there. Pieces like ‘No Drums’ and ‘Analog Paralysis 1978’ barely even exist at all and on closing tune ‘In The Air III’, the sound has dematerialised so much that you’re slow dancing with ghosts.

The press release alludes to a conceptual subtext at the sidelines of Ravedeath 1972 concerning digital ubiquity and melancholia and the destruction of music (‘The Piano Drop’ title and cover art and pieces like ‘Hatred of Music’ and ‘Studio Suicide’) but really Hecker’s entire oeuvre and this album in particular are so lost in an edgy ethereal midnight blue dawn that it’s almost impossible to summon any earthly concerns. Rapture has never sounded so eerie. As the world spirals into hell these are the lullabies to dull the pain.