FACT can reveal that Hessle Audio will release an epic 2xCD/3×12″/digital label compilation entitled 116 & Rising on May 16.

Curated by the imprint’s three co-founders – Ben UFO, Pangaea and Pearson Sound (AKA Ramadanman) – the CD version is comprised of 12 brand new tracks tracks, with contributions from every single producer who’s previously released a 12″ on Hessle, plus a couple of guests, and a second disc collecting previously released highlights from the catalogue.

That means fresh heat not just from Pangaea and Pearson Sound but also Blawan, Joe, Elgato, Untold, Cosmin TRG, Peverelist, James Blake and Addison Groove, and a couple of unexpected treats – such as D1‘s never-before-released archive cut ‘Subzero’ and a killer from the hitherto little-known Randomer. Most of the tracks on Disc 2 are modern dancefloor classics, and hardly require any introduction – among them Martyn’s eerily suspended, deeply affecting remix of TRG’s ‘Broken Heart’, Untold’s none-more-livewire ‘I Can’t Stop This Feeling’, Pangaea’s ‘Why’ and James Blake’s ‘Buzzard & Kestrel’ (a track he’s arguably yet to better).

The new tracks will constitue the vinyl edition  of 116 & Rising, which is a 12″ triple-pack; the striking artwork on both CD and vinyl editions is by Will Bankhead. Oh, and there’ll be a launch party for the album at London’s XOYO club on Friday 13 May.

Below you can check the cover art and tracklisting, and below that Ben UFO talks exclusively to FACT about the concept and execution of the compilation. 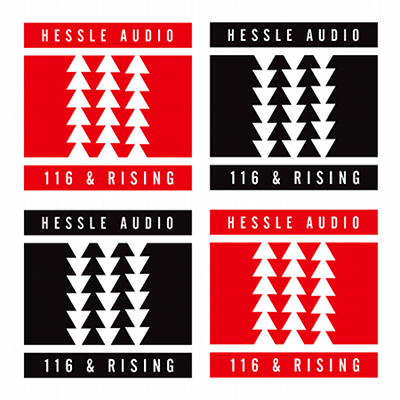 At what point did you decide you were going to do a label compilation? They’re quite tricky   – they can either be quite landmark, defining enterprises (Hyperdub’s 5, for example) or just be quite neglected, ephemeral things.

“I agree, definitely. There’s been a lot of them recently as well, which made us cautious going into it. We felt though that we had a back catalogue big enough, and a roster of producers diverse enough, to justify a bigger project. The original idea was that it’d be a way to celebrate our 20th release, although our schedule didn’t allow for that in the end – as it is, it’s just an interesting way to experiment with a different format, and to try to reach out to an audience who may not be going to record shops buying singles every week, without alienating those who do. The scale of it means we can try some new things in terms of presentation and artwork as well.

Did the double-CD/triple-vinyl format seem the obvious way to do it, or were you flirting with other ideas?

“We wondered about splitting the vinyl releases, but in the end decided that a triple vinyl release made more sense. We wanted to emphasize that this project is something different for us, and something I think we’re unlikely to repeat. The idea of putting everything out together appealed too as a way to avoid any kind of hierarchical consumption of the material – all the producers’ work is presented together, and people who buy vinyl will get exactly the same material, and the same artwork as those who’d prefer the CD. For the same reason we’ll be including CDs with the vinyl release.”


“The aim is to reach out to an audience who may not be going to record shops buying singles every week, without alienating those who do.”

Did it come together quite naturally, in the sense that you had all these tracks available to you as demos or such, or was it a case of you coming to Untold, Peverelist, etc, and saying ‘we’re doing this comp, we want you to contribute’?

“It was a bit of both. Peverelist sent us ‘Sun Dance’ at the same time as the tracks for HES018, and obviously David [Ramadanman/ Pearson Sound] and Kev [Pangaea] had material ready for us to release. We let people know well in advance that we were planning this project, and why we thought it’d be something worthwhile being involved with, and I think that’s meant that we haven’t ended up releasing offcuts. Every producer we’ve ever released original material by has contributed, which is something I’m really grateful for, and proud about. Some of the tunes are older and some are newer, but hopefully they all work together.”

It’s the third Hessle release with full artwork (after Ramadanman and Pangaea’s double-packs) – who designed it?

“It was designed by Will Bankhead, who’s been making amazing sleeve art for years, most recently for Honest Jon’s and Doldrums amongst others. He also runs the Trilogy Tapes which I contributed to last year.”

The majority of the artists featured are what you’d expect… D1 seems an inspired shout though. You could argue he’s dubstep’s most underrated producer, him or Toasty. How did he end up on there?

“It was a tune that David asked for around the time we started doing Ruffage Sessions on SubFM, and it was already semi-forgotten about even then. Youngsta used to play it every set around the time we started going to FWD>> and DMZ, when he was just playing the super-dark, stripped-back stuff Mala, Loefah, Skream and D1 were doing. We included it on the compilation more or less on a whim, having started to play it out again and thinking it was kind of a precursor to all the drum machine stuff being made now.”

“Having worked with most of the producers before made it easier to come to decisions we could all agree on. It would’ve been a lot harder if the tunes weren’t as good….”

Who’s Randomer? He’ll be an unfamiliar name to many.

“He’s had quite a few releases out this year. We’ve all been playing his tunes for a while, but with him having other outlets for his music we hadn’t found the right time to work towards a 12″ release. This seemed like a good opportunity to put something out.”

As there’s three of you running the label, there must be some disagreements in terms of what you want to put out. Did that make figuring out the tracklist for a project of this size even harder?

“It did to an extent, but having worked with most of the producers before made it easier to come to decisions we could all agree on. It would’ve been a lot harder if the tunes weren’t as good, basically.”

Are there any other Hessle going-ons we should know about (launch party aside), or has this been taken up all your time of late?

“This has been the most intensely time consuming project we’ve ever done, so we’re definitely focusing on this. As you say, the launch party’s at XOYO on May 13, and the week after we’re doing a night with Doldrums at Panorama Bar on May 21st.”