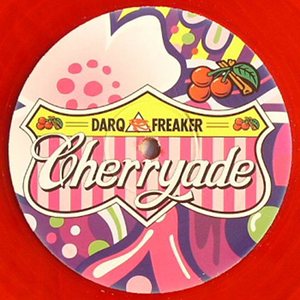 See that? That’s ‘Cherryade’ by Darq E Freaker. Like the look of it? Want that cherry red, marbled, translucent vinyl? Well, you’d better hurry up, because they seem to be shifting pretty quick.

The reason why these are disappearing is that Cherryade is, quite simply, a massive grime release. Martin ‘Blackdown’ Clark has been suggesting it’s probably release of the year, and he’s not wrong. It’s a modern classic.

There are 3 tracks on this record: ‘Queen of Hoxton’ pays homage to the East London pub and is a classic 8-bar approach, while ‘Cape Town’ uses a sluggish bass/lead line underpinned by surprisingly nimble, shifting double-time drums with a half-tempo snare. Although the synths in both can be a little trancey in places, they’re both solid cuts.

But lead track ‘Cherryade’ is what this record is actually all about. Admittedly similar to previous big release ‘Next Hype’ in its simplistic metallic sample hook, it is an improvement in terms of content, direction and execution. It is a more mature production overall, using voodoo flute calls over dramatic Hammond organ bridges, both offset against re-pitched stabs of themselves. These moments work deftly to both contrast and compliment the big, dumb, clanging, super-catchy melody that follows. Despite its 140bpm neck-snap, the groove shuffles with a bashful swagger that is perfect for bubbling.

‘Cherryade’ will undoubtedly smash up plenty of car systems, pirate shows and clubs this summer, but it is likely to have staying power too. And once more people start adding bars like these, things are going to get even more interesting. Highly recommended.