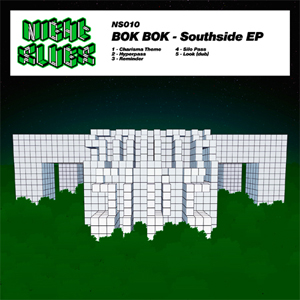 Southside is Bok Bok’s first full release for Night Slugs, the label he started in late 2009 and which released such a remarkable amount of good music in 2010 that it ended the year as many people’s favourite new imprint. He has the unfortunate task of not only stepping up to bat first in the historically-dreaded sophomore year (Night Slugs did release a Pearson Sound 12″ in March, but did so on their white label sub-series), but having to follow a first year that included one of the most universally lauded dance tracks of recent memory, Girl Unit’s ‘Wut’.

When put under pressure, many people turn inwards. Whether it’s pressure that prompted Southside‘s direction or not, we might never know, but it’s a record that certainly comes from within, drawing from the rhythmic contradictions of the ’02-’05 era of instrumental grime that was a prominent part of Bok Bok’s DJ sets prior to Night Slugs, and prior to his own production. Designed with MCs in mind, classic grime was both straight to the point and rhythmically complex, and here Bok Bok provides his own spin on that style, painting it with the same widescreen approach to colour that defines the Night Slugs artwork. And so, daubed over Southside‘s dark drums and bass noises, we get rain, ambience, sweeping neon synths and more. It’s classic grime, but it’s also 2011, and more than anything, it’s Night Slugs.

It’d be interesting to see what certain artists from the era that informs Southside make of it. ‘Reminder’ in particular borrows heavily from a well-known old grime tune, and between that and some of the samples, you could understand a level of distrust towards it. For me though, it’s a genuine, heavily-studied interpretation of a classic sound, and done in a style that makes it distinctly Bok Bok.