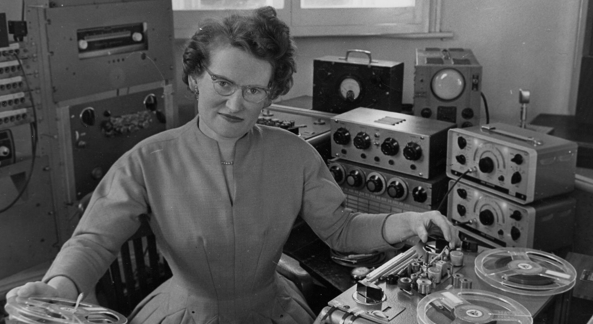 An exhibition looking at the birth of electronic music opens this Friday, 29 July, at London’s globally renowned Science Museum.

Oramics to Electronica: Revealing Histories of Electronic Music focusses primarily on the work of Daphne Oram, who helped establish the BBC Radiophonic Workshop (the organisation that also featured the likes of Delia Derbyshire and John Baker and created numerous hugely innovative TV themes, cues and idents, most famously the Derbyshire-composed Doctor Who theme).

At the heart of the exhibition is The Oramics Machine, a unique synthesizer invented by Oram in the 1960s. Long thought lost, the machine was recently recovered and added to the Science Museum’s collections in co-operation with Goldsmiths, University of London.

“The Oramics machine is a device of great importance to the development of British electronic music,” says Mick Grierson, Director of the Daphne Oram Collection at Goldsmiths. “It’s a great shame that Daphne’s contribution has never been fully recognised, but now that we have the machine at the Science Museum, it’s clear for all to see that she knew exactly how music was going to be made in the future, and created the machine to do it.”

Oramics To Electronica enters its second phase on October 10, when it will be showcasing a wide array of electronic music and sound reproduction equipment with help from employees of the BBC Radiophonic Workshop and Electronic Music Studio (EMS), who produced the first commercial British synthesizer, the VCS3 (rocked by everyone from Brian Eno to Life On Earth composer Edward Williams). In October and November, a programme of “Electronica, Radiophonics and Oramics associated events, workshops and performances” will run alongside the exhibition; details to follow.

“The new exhibition is all about the birth of electronic music and its many influences on today’s music scene,” says Tim Boon, Chief Curator at the Science Museum. “We’re so pleased to be able to showcase the amazing Oramics machine at the Science Museum – few people have been able to see it since the 1980s and this is a great opportunity. Our new interactive also allows you to recreate the sound of the Oramics machine – so you can compose and arrange your own music.”

The exhibition can be found at the Science Museum on Exhibition Road, London SW7 2D, which is open daily 10am-6pm.