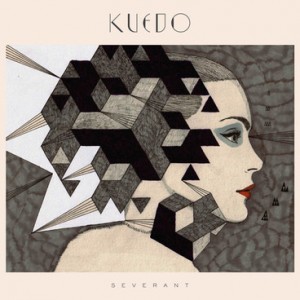 As one half of Vex’d, Jamie Teasdale was responsible for some of modern Britain’s heaviest music: an update of Godflesh’s urban nihilism, placing that frustration into an early grime and dubstep context.

The further we get from Vex’d, however (the duo split up after only one album, though a retrospective second full-length, Cloud Seed was completed last year), the more Teasdale has distanced himself from their aesthetic, claiming in a recent interview with Martin Clark that “a lot of the musical parameters were really built around Roly [Porter, the second Vex’d member]’s preferences”, and that his role in Vex’d was often closer to that of an engineer. It makes sense then, that not only does Teasdale’s first solo album sound nothing like Vex’d, it sounds completely free, as if Kuedo represents the music he was destined to make all along.

The interviews Kuedo has given surrounding the album are almost as illuminating as the record itself, and the key inspirations behind Severant appear two-fold: exploring futurism, and how our perspective on the future has changed (mostly portrayed by the album’s signature synth sounds and romantic feel – Kuedo uses phrases like “starry-eyed” and “starry-ness” throughout the interview he gave to FACT last month), and US trap-rap (portrayed through the hi-hat rushes and snare rolls that populate the album’s drum grids, and which pay tribute to Stateside hip-hop producers like Lex Luger and Shawty Redd, as well as, at times, footwork). 99% of Severant is simply a combination of these two elements, and although across 15 tracks its power can wane, it still makes for one of 2011’s most unique and cohesive albums: one with a sound that, for all the adapting of the trap rap style in recent years, hasn’t been done before on this scale.

Although Severant‘s quieter moments, such as the glacial ‘Reality Drift’ and its unmistakable opening track ‘Visioning Shared Tomorrows’, are gorgeous, the album really excels when it finds that perfect equation between the frantically rolling drums and incredibly calming synth melodies: tracks like ‘Truth Flood’ and ‘Onset (Escapism)’ are like being in the eye of the storm, where despite the chaos that’s going on around you, your only option is to stand still. At other times (‘Ascension Phase’), there’s such little space between the drums that there may as well not be a grid at all, and the music has license to go completely free-form. Sometimes it’s amazing how much freedom a restricted palette can give you, and Severant revels in its self-imposed boundaries.

Whether Kuedo can play the same trick twice remains to be seen: like some of the cinema it references, Severant is so unique that it’s hard to imagine a sequel being anything but a step down. But you get the impression that Jamie Teasdale will cross that bridge when it comes: on this album he shows such gift with melody and drama, that you imagine his palette will end up becoming the last thing that matters.