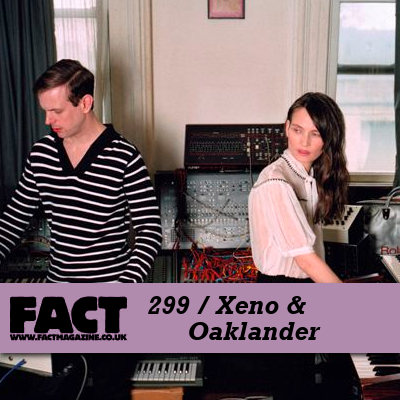 FACT mix 299 is by the wonderful Xeno & Oaklander.

The New York duo, real names Liz Wendelbo and Sean McBride, has just released a new album, Sets & Lights, on Wierd Records – the label that pretty much instigated the “cold wave” and minimal synth revival. X&O have been it longer than most, debuting with the self-released Vigils CD-R (subsequently reissued on vinyl by Wierd) back in 2006. Their sophomore LP, Sentinelle (2009), is one of the most poised and punchy examples to date of the new American synth-pop.

Something special happens when McBride (who also records killer solo material as Martial Canterel) and Wendelbo (also an artist an filmmaker interested in “cold cinema” – what else?) work together. They’re supremely adept at channelling not just the iciness and oddness of late 70s and early 80s synth-pop, but also its solid gold hooks, its seedy glamour, the bio-mechanical velocity of it all. Or, as McBride sings, “the theatre, the stage / the sets, the lights / masking some grand delight.”

The new album is a particularly potent brew, showcasing an even greater maturity to their compositions – the swelling, near-symphonic instrumental ‘Italy’ is particularly noteworthy – alongside an increasingly sensual, even eroticized pop sensibility. The vocal interplay between the band’s new members – McBride’s dandyish, pseudo-European vowels dancing and duelling with Wendelbo’s more airy, ethereal outpourings – is thrilling, particularly on the title track.

When we asked Xeno & Oaklander to make a FACT mix for us, we knew they’d dig deep and come up bearing treasure. The renewal of interest in minimal synth and the attendant reissues race has generally meant diminishing returns – it’s hard to escape the sense you’ve heard all in that field that’s genuinely worth hearing. X&O’s has forced us to reconsider: Parade Ground’s ‘Gold Rush’ aside, we weren’t familiar with any of the songs they’ve stitched together for us, and everyone is mind-blowing: from the speed-freak gallop of Niels Jensen’s ‘East Side Story’ to the over-sexed italo throb of Pink & Black’s Sometimes I Wish’.

The collectors and obsessives among you will be heading straight to Discogs to track the originals down; everyone else, just download, press play and enjoy this tour through the back pages of electronic pop music – led by two guides who seriously know their shit.