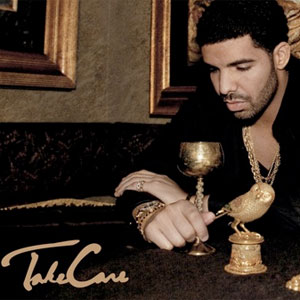 The first sound we hear on one of the most anticipated hip-hop albums since Tha Carter III is the distorted warble of Canadian adult-contemporary singer-songwriter Chantal Kreviazuk. Yep, this is the new Drake album. It isn’t till track three that we get anything close to uplifting, and I don’t think any of us would have it any other way, really. Take Care comes with all sorts of baggage: almost half of its tracks were let out before its release in one form or another, and the most divisive things about Drake – his toxic narcissism, his workmanlike singing, and his narcoleptic tempo – have only been emphasized. But those are the things that make Drake Drake: they’re why he has a dedicated following not only in the mainstream, but with hipsters, stodgy music critics, and avant-garde aficionados alike.

Take Care feels like an event, and it sounds like one too: it’s Drake’s self-conscious attempt to make up for his rushed debut Thank Me Later, an album that – as masterful as it was – sounded like the work of a novice visionary, a true debut album that tried to spread out in too many directions at once. But unlike most hip-hop events, and in true Drake fashion, more time on Take Care is spent reflecting than bragging. The album cover is ridiculous but accurate, a protagonist at the top of his game simultaneously reveling and wallowing in their own larger-than-life glory. Even his kiss-offs are tinged with undercurrents of regret: ‘Shot For Me’, with lines like “Bitch I’m the man/Don’t you forget it” sung in Drake’s sweetest falsetto, is skin-crawlingly fake, turning what makes him out to be whiny into a psychological weapon sharper than anything this side of Odd Future.

With tracks like the year-defining ‘Marvin’s Room’ – a 2am drunk-dial distilled into song – Take Care isolates and emphasizes what made Thank Me Later so outstanding, that curiously comprehensive exhaustion both emotional and physical. Overseen by Drake’s closest artistic partner, Noah “40” Shebib, the album is full of hollowed-out beats, whooshing synths that feel like liquored lashings of warm breath, and hooks more aching than anthemic. Though the album is host to quite a cast of producers – Just Blaze, Lex Luger, Jamie XX, Boi-1da, The Weeknd’s production team – they’re all tinged by 40’s indomitable aesthetic, widescreen drama narrowed down to monochrome tunnel vision. Lex Luger’s contribution, for example, is downright druggy, all slurred metronomes and a half-audible John B sample, laced with Drake’s most laconic drawl, while Just Blaze’s unbelievably epic ‘Lord Knows’ – surging choirs swept up in quaking drum mayhem – has one of those characteristically 40 breakdowns into submerged liquidity before Rick Ross storms in to deliver one of the album’s most memorable verses. When he works with “tumblr’n’b” superstar the Weeknd the results are some of the album’s most fascinating moments, particularly on the disorienting, downright queasy start-stop drumming of ‘Crew Love’, a typically swirling ode to knowing oblivion.

Drake has always fashioned himself as a singer as much as a rapper, and it’s never been clearer than here. Still propped up by autotune, his voice is nevertheless sweeter, more emotionally transparent. He’s still got that keen ear for tiny, unforgettable vocal hooks: the rushed refrain of ‘Make Me Proud’ is anchored with that candy-sweet “I’m so-I’m so-I’m so” hook, a formidable earworm that typifies his approach to micro-melody, while the pre-chorus on ‘The Real Her’ wafts by on a sighing cloud of reverb. Even better is when he collapses the difference between the two, adopting a reassuring croon on the latter track and the maudlin-but-touching ‘Doing It Wrong’ (a stunning reversal from the earlier fuck you of ‘Shot For Me’), his trademark lyrical flow keeping him from floating away on a breeze of bathos.

It can just as easily get him in trouble, however: the album’s title track, featuring Rihanna and produced by UK poster child Jamie xx, has already proven divisive, and it sticks out as a sort of step-too-far into the pop realm on Take Care. It’s also kind of brilliant. It’s temping to view it as Drake’s take on the club-ready Europop knockoffery that is modern American pop, and so of course he would take one of Jamie xx’s sad bastard thumps instead of looking to Polow Da Don, RedOne, or, god fordbid, Dr. Luke. With no big trance riffs or blown-out four-to-the-floor to be found, the beat is intermittent and careful, falling down into pits of dramatic xx guitar rather than crescendoes, and its oddly affecting love story (“When you’re ready just say you’re ready/When all the baggage just ain’t as heavy/And when the party’s over just don’t forget me/We’ll change the pace and just go slow”) turns a potential piano house party anthem into a virtual soap opera. Yep, this is definitely a Drake album.

When tracks like ‘Trust Issues’ and ‘Marvin’s Room’ started to leak out of the OVO universe this summer, it seemed too good to be true: Drake was unapologetically running with the melancholic vibe that made Thank Me Later such an interesting record in the first place, but everything seemed more expert this time around, more convincing – the drama, the self-pity, the bragging, the production. Take Care really feels like the result of an artist working with the entire world at his beck and call, but instead of bloating himself with possibilities he’s narrowed his vision down to exactly what he wants: a hip-hop masterpiece. And he almost got there. Nothing about Drake has changed enough to sway his detractors: this is just a fuller record than last time, an all-star big-time event that actually delivers, one of the most adventurous major-label hip-hop albums since The College Dropout.

This is a record that begins with Drake rapping over Chantal Kreviazuk’s piano and ends with him navigating a cooing vocal loop from one of 2011’s most ubiquitous and mysterious artists. It constantly toes the line between cool and cornball, between magnificent and mawkish, between sensational and schmaltzy, but it’s all pulled together by Drake’s inimitable personality and the genius of his producer. Whatever perspective you look at it from – a pop record, a hip-hop album, an R&B album, or something more wrapped up in the dialogue of electronic music that 40’s deft production hand forces it into – it dominates every dimension. “Yeah I made it,” he sings cockily on ‘Shot For Me’, and this time around it really feels pointless to bother arguing. Yeah, he made it – he made the name, he made the fame, and he made one of the best albums of the year and a hip-hop landmark in the process.