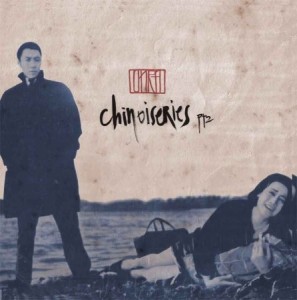 Available on: All City LP

Five years ago Onra was a little known beat maker from Paris whose Myspace page hinted at some serious MPC skills. And then he dropped Chinoiseries, a self-released LP of beats made using only Chinese and Vietnamese vinyl samples he’d unearthed on a trip to Vietnam. The result was an otherworldly beat tape, soaked in hiss and crackles that married hip-hop’s breakbeat funk with south east Asian melodies, pop samples and voices, and sounded like the soundtrack to a lost Wu Tang movie. In the years that followed Onra established himself as one of France’s finest exports of new school hip-hop, dropping collabo LPs, solo albums and most notably a boogie tinged “official” debut for All City, all the while hinting that Chinoiseries would be revisited at some point.

And so Chinoiseries pt.2 picks up where its predecessor left off, with a stack of Chinese and Vietnamese vinyls finely combed for samples and loops and spread across 32 beats, ordered this time like “a sequence of film scenes”. Onra kicks things off in traditional hip-hop fashion with an intro laced with cut up rap samples before immersing the listener into his tale with the majestic swing and funky horns of ‘A New Dynasty’. The tracks are kept short but sweet, never overstaying their welcome and sequences in a manner that manages to keep the listener engaged despite the sonic similarities between them.

A track by track breakdown is fairly pointless, though repeated listens do bring up some highlights and favourites. There’s the mellow, laid-back vibe of ‘Mai’s Theme’, potentially the scene where our hero gets a relaxing massage in between bouts of fighting or running from enemy gangs. ‘Still Broke’ is probably the closest Onra gets to the mass appeal of pt.1’s ‘The Anthem’, with a swung out beat and piano loop that wouldn’t be out of place with a rapper on top. Then there’s the tense mood of ‘Fight or Die’, a slow, banging rhythm best suited to a night time driving through a city scene. And last but not least there’s ‘All Night’, a hypnotic loop that slowly builds into a junglistic ride, perfect for that chase scene through the streets of Hanoi.

While there is a sense of repetition that arises on repeated listens, Onra has managed to craft a coherent and much more refined listen than the first Chinoiseries, thanks in no small part to a wider palette of samples encompassing more than just south east Asian pop and folk. You’ve got rock, western music riffs and snippets of covers cropping up, and plenty of atmospheric scenes and voices that glue the whole thing together rather neatly. It might just be a beat tape with a theme – and I mean no disrespect when I say that – but it’s one that shows skills and an ear for samples and flips like few possess in hip-hop today. It’s also some of the best fun you’re likely to have with an MPC album this year.