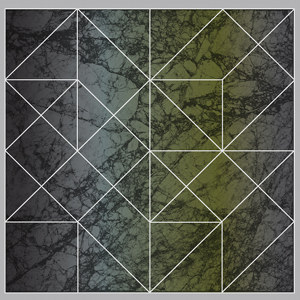 We’re terminally skeptical towards sophisticated technologies, believing that the portrayal of organic agents in electronic music is entrenched with Dystopian thinking; that each technological advancement is a step towards a lifeless machine-led future. The music of Brazilian (but now Boston-based) musician Ricardo Donoso, however, is neither futuristic nor Dystopian – not a commentary of the present set in a future reality, it exists brilliantly in the here and now. Progress Chance, his latest album for Digitalis, is a beautiful record of synth-driven beatless techno, meticulous textures, vibrant builds and warm bubbles.

The album’s opening notes imagine rich communication between machines; a language born from systems, one synth communicating with another. Like the opening scenes of Wall:E, where we’re introduced to the soul of two machines through illustrating their language, it’s a compelling and popular approach. More so, there is nothing dystopian or futuristic about these concepts. Both Donoso and Wall:E mirror today’s world of micro-transactions made at impossible speeds to bolster the stock markets; a world where machines are communicating more than we humans are.

Track ‘Klatu’ lands somewhere between the music of Mist and Kettenkarussell, between glitchy pulsations and synthetic glockenspiels, electronic glow and minimalism, and despite extolling the virtues of analog the track never assumes a retroactive stance. Hidden within it is a rough recording of radio conversations, while the sonic landscape is marked out with computers, crisp and sweet, engaged in classy conversation whilst humans struggle to exchange the most desperate of messages, voices breaking up, slowly disappearing. On ‘Baiting Disappointment’ the sound dances in stereo – two contrasting erratic pulses, one soft, the other sharp. Behind these two textures there’s the raw humming of electronics, imagining a National Grid terminal; a sonic palette that becomes a familiar character throughout the record. Where Donoso excels is in taking a simple selection of complex sounds and manipulating then enough to ensure variety, but keeping enough elements for the record to retain an aesthetic identity. ‘The Deck of an Ancient Ship’ features a glitchy funk, whereas ‘Morning Criminal’ is broody Italian minimal; ‘The North Quadrant (Ascension)’ is the overall highlight of the record and ‘Conditional Formatting (Descent)’ lends a completeness to it.

The masterstroke on this album is that it complements its environment. Despite its sophistication it is in no way aggressively futuristic. It never inauthentically overreaches or out-thinks its contemporaries. The sound is never forced and there is nothing on the album that suggests artifice. Nor is it looking into the past; it’s a record perfectly suited to the modern era. One where we are drifting in a sea of technology, out of choice. Put bluntly, the environment which Donoso provides is an ergonomic one.

On This Week, a late night BBC political show, Economic Guru Alvin Hall spoke about how many people in the UK are in denial about the terrible financial state of the country. That without one sharp shock to the financial system people are carrying on unaware of the impending destruction. Indeed, even if we are to argue that British people are kidding themselves as to their security, few are in any doubt that something catastrophic in on the horizon. As we watch the stock market behave in unexpected ways, both vulnerable and tolerant, we have adopted a dream world mentality, one where we are becoming increasingly out of touch with reality, as “the real” becomes increasingly complex and unexplainable.

The subjectivity of floating in a world dependent upon algorithms which no one controls runs through Donoso’s music like sub-prime mortgages in times of poor fiscal regulation. Progress Chance doesn’t reflect flash-in-the-pan rioting, nor does it depict night bus rides, nor social change, nor revolution. It is a record that perfectly bottles our oneiric inclinations. It places the listener firmly in a disconnected fantasyland watching the world spiral out of control. Progress Chance, perhaps, defines 2011 culture like no other.