The Weeknd: Echoes of Silence 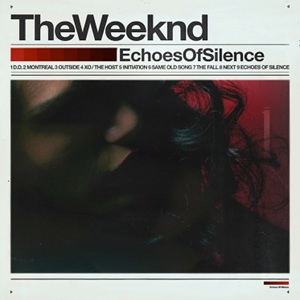 Echoes of Silence is the third mixtape in The Weeknd’s acclaimed 2011 trilogy, following House of Balloons and Thursday. It continues many of the themes found in its two predecessors, both musically, in the heavy reverb and drums that seem to have crucial parts of their body mass hollowed out, and lyrically – in fact, there’s a significant amount of specific lyrical references to lines from The Weeknd’s previous two mixtapes and his contributions to Drake’s recent sophomore album Take Care. It opens with a cover of Michael Jackson’s ‘Dirty Diana’. Which begs the question that some have already asked: is The Weeknd running out of ideas?

There’s every chance that he could be, but Echoes of Silence isn’t the place to judge. It’s The Weeknd’s most playful, confident mixtape yet: the ‘Dirty Diana’ cover doesn’t bear much relation to what follows it, and appears to have been designed as more of a curio – a kind of false start; a bonus track that appears before rather than after the rest of the record – than as a part of the record itself. At the end of ‘Same Old Song’, there’s a cameo by Three 6 Mafia’s Juicy J which is hilarious (“The Weeknd music make ladies’ panties get wet … spend that shit nigga, it’s Christmas”), but deliberately breaks up the flow and mood that the last five songs have set. You wouldn’t have found it on House of Balloons, where every note seemed meticulously designed to keep up the album’s greyscale feel. There’s still tragedy at the heart of Echoes of Silence – its title track is the lowest that we’ve found The Weeknd’s yet – but for the most part, it finds him having more fun than on his previous records. The end’s in sight.

Rather than running out of ideas, Echoes of Silence is the sound of The Weeknd continuing and concluding the dominant themes of the trilogy: sex, drugs and sadness. The first half of ‘XO’ deals in Polaroid snapshots of weed, Hennessy shots and booty calls – auto-pilot mode for The Weeknd at this point – but as it morphs into its second half, it turns its focus to the aftermath of House of Balloons‘ ‘Glass Table Girls’. The song’s subject still “ain’t ready for her day shift”, but this time her mum’s crying in the next room after finding paraphernalia in her laundry. And inevitably, The Weeknd’s there to take advantage.

The most memorable moment here however, has to be the title track. If Thursday’s ‘Rolling Stone’ seemed reliant (“baby I got you / until you’re used to my face / and my mystery fades … so baby love me / until you won’t love me”), then ‘Echoes of Silence’ – a lament over languid piano that closes the mixtape – is something else. The Weeknd’s sounded pathetic before, particularly on Thursday, but “baby please / will you end your night with me / don’t you leave me all behind / don’t you leave my little life” has to be as small and self-loathing as he’s sounded yet. It’s The Weeknd’s funeral song, and the death march not just to Echoes of Silence, but of this whole trilogy. And despite a couple of missteps and the odd moment of doubt, I can’t remember the last time a series of three full-length records released this close together has captured me – and others – in the way that this has.