Emeli Sande: Our Version of Events 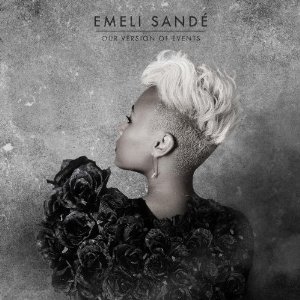 It’s all too easy to fall into the trap of judging an album on what one has imagined it to be instead of what it sets out to be – measuring it against a yardstick that never existed. Aberdeenshire singer-songwriter Emeli Sandé’s voice has been a familiar sound to fans of the UK urban underground for some time now: this writer first heard it at the London grime/funky/dubstep night FWD>> in 2009, on an unexpectedly sultry funky house version of White Town’s ‘Your Woman’. That turned out to be Wiley’s ‘Never Be Your Woman’, and Sandé’s silky detachment proved the perfect foil for one of Wiley’s most effective character raps: terse, numbed and irritable without losing his wit.

‘Never Be Your Woman’ went top 10 the following year, foreshadowing Sandé’s eventual emergence in her own right not as a singer grafting on underground tracks but as a mainstream proposition in her own right. Not that this was a reason for pessimism: Katy B’s breakthrough opened up a route for that distinction to be eroded, and in her wake followed a group of female singers who seemed as equally invested in forward-looking beats drawing on the lived experience of British club culture as in commercial success, such as Delilah and Yasmin. Sandé’s own ‘Heaven’ positioned her within this wave: the obviousness with which it wore its influences (Massive Attack’s ‘Unfinished Sympathy’, Baby D’s ‘Let Me Be Your Fantasy’, Katy B’s ‘Broken Record’) ended up feeling more like pride in that lineage. In the end, though, it transcended them – due to Sandé singing the hell out of a song that concerned itself with the uncertainty and slipperiness of identity. Pealing out of cars, windows and tower blocks last summer, Sandé’s personal existential dilemma seemed also to capture something about the restlessness of Britain in 2011.

Sandé carries this feeling over into the bold, arresting title of her debut album, Our Version Of Events – and then stops. ‘Heaven’ was a red herring, a bait-and-switch to disguise a full-length otherwise entirely composed of middle-of-the-road balladry: it turns out that Sandé’s eyes weren’t so much on Katy B as Leona Lewis. Not that this, in itself, is a reason to dismiss it. But what makes Our Version Of Events so underwhelming is that, judged by the standards it sets for itself, it is still a trite and empty work.

‘Heaven’ isn’t just the most dancefloor-friendly cut here: it’s also one of the few examples of quality songwriting, or perhaps just a lightning-in-a-bottle moment wherein Sandé’s penchant for empty questions cohered into something meaningful. Otherwise, her lyrics are vague and mundane: she glosses over any details that might provide emotional resonance, and mostly shies away from any narrative perspective other than the most thunderingly obvious. ‘Daddy’ is an exception, the heartfeltness of Sandé’s girl-to-girl advice undercut by the sense of knowing futility. Elsewhere, though, she parrots Miss World clichés on ‘Hope’ (“I’m hoping that change isn’t hopeless”), a song that only works as an unintentional retroactive parody of Barack Obama’s campaign slogans, and asks, “If you’re too big to follow rivers, how are you ever gonna find the sea?” It’s a question that Sandé herself seems to realise means nothing whatsoever before she even finishes singing it.

Which brings us on to the most disappointing aspect of Our Version Of Events: Sandé’s own performance. Despite her undoubted vocal talents, she doesn’t possess the authority to sell the bluster of her lyrics. She lacks the rarefied imperiousness that enables Lewis to hit upon the occasional special moment amid the blandness of her own career, but also the warmth requisite to pull off something lower-key. Our Version Of Events is a transparent attempt to get that Adele money, and it may well succeed in that aim. Artistically, it feels like a waste of talent.