What’s the point of festivals?

Is this the way they say the future’s meant to feel? Or just 20,000 people standing in a field? 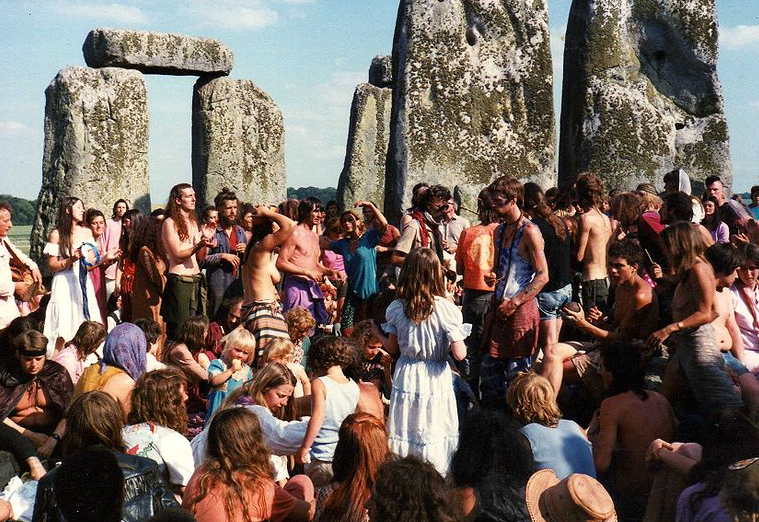 
Where does our notion of what of a festival is come from?

This article was first published in FACT:05, Summer 2004.


The strangest truth about the late ’60s is the extent to which the culture was shaped and inspired by LSD.

The word ‘festival’ comes from Feste meaning ‘feast’, originating somewhere between 1200 and 1460.

El..Es..Dee. Some modern festivals – both illegal or free and licensed – are a re-creation of Ken Kesey’s house at La Honda circa 1964-66, as described in Tom Wolfe’s The Electric Kool-Aid Acid Test – the sound system in the woods, trees painted fluoro, the light-show, junk-metal sculptures and the changed or deranged or affected acid-users. Wolfe is quite specific about the history – he argues Kesey’s Merry Pranksters invented the psychedelic culture of the late ’60s – the combination of rock ‘n roll, feedback, performance art, light/visual shows and, as Wolfe calls it, El..Es..Dee.

The strangest truth about the late ’60s is the extent to which the culture was shaped and inspired by LSD. They had bad trips and ‘freak-out’ tents at the Isle of Wight and Woodstock festivals. Such a think would seem anomalous now, even ridiculous – but it is indicative of how absolutely the rock’n’roll/festival culture saw itself as an LSD culture. At Woodstock the injured included people who burned their eyes staring at the sun. “If they were tripping,” said the Freak Out Tent’s Nurse Sanderson, “they’d lie down on their backs and just stare.”


The festival has always been a litmus or metaphor for the limits of freedom.

I have kept this mental picture from Glastobury 2001: a naked man in his mid-20s standing and shivering near the (fake) stone circle in the mist of Sunday dawn – another man (clothed) is ‘talking him down’, holding a blanket. If you watch Nic Roeg and David Puttnam’s film of the first festival on Michael Eavis’s Worthy Farm in 1971, Glastonbury Fayre, the movie appears to show what looks like an intimate LSD-ritual/gathering. So many of the bands are playing such trippy music (to sometimes naked dancers), a sound far removed from pop. Some of the singers are either high or feigning psychosis.

There will be 500 uniformed police at this summer’s Glastonbury festival [this article was written in 2004], plus additional ‘comms’, intelligence and press officers. They have their own compound on the festival site, the largest of any individual organisation. “There’s a great view from our office,” says Avon and Somerset Police’s press officer. “We can see the main stage.” The police PR says they maintain a high presence. “You shouldn’t have to walk more than 30 or 40 yards without seeing some form of police presence.” He says festival-goers accept this policing. “Last year it was very good humoured.”

The PR is keen to stress that no one without a ticket will get near the festival. The police will use the Anti-Social Behaviour Act (2003) that allows them to break up and move on groups of more than 30 people – previously it was 100. It is not actually legal to turn ticket-less people away but the PR said that they will “move people on”.


“There’s a great view from our office,” says Avon and Somerset Police’s press officer. “We can see the main stage.”

To me, the police energy around Glastonbury – whatever the intention – seems repressive. In addition there is the security fence, and watchtowers are staffed on 12-hour shifts. There is a strange resonance between the idea of a festival an the apparatus of the gulag (almost the same bitter joke as artist Tom Sachs’ Prada Death Camp). But the festival has always been a litmus or metaphor for the limits of freedom. Writing about Altamont, the Stones’ notorious 1969 festival at which four people died, mainly because of the brutal tactics of the Hell’s Angels, hired as security, Rolling Stone journalist David Dalton notes: “One of the interesting aspects of the Altamont ‘experiment’ was, of course, to see how feebly the counter culture handled a crisis, without the help of the customary social restraints.”

Altamont was a drag because the Stones (who were supposed to be cool) and the Angels (ditto) showed themselves up as incompetent and sadistic.

Altamont was a drag because the Stones (who were supposed to be cool) and the Angels (ditto) showed themselves up as incompetent and sadistic. This means almost nothing now but it was far more crucial in the ’60s when a counter-culture existed and said it wanted a revolution and wanted to remake and control society. There was no official manifesto or political party – to all extents the policies of the counter-culture were written in communication lines between London, New York and San Francisco, and media like Oz, International Times, Friendz and the lyrics and interviews of rock stars, art stars and the underground – groups like The Diggers and Yippies and English arts labs, squat groups and collectives like the London Free School (who started the Notting Hill Carnival).

The demands of the underground/counter-culture, as written in IT and Oz, were for abortion, sexual liberation, marijuana, easy divorce, freedom from censorship and legal tolerance of homosexuality. There was also an interest in communes, self-sufficiency and Hobbit-like back to the land existence. Oz magazine presented a “blueprint for an alternative society”, says Elizabeth Nelson in The British Counter-Culture 1966-1973. Oz talked about “love communes” that owned their own land, horses and means of production. There was a sense that this was a time for action. In December, 1967, International Times declared: “The bluff of the under-30s is being called by the Establishment.” It was time, said IT, for a real not a “mock revolution” – it was time “for us to make the future Ours.”

Festivals like Woodstock (750-950,000), Rolling Stones in Hyde Park (500,000) or Isle of Wight (200-600,000) were moments when something the approaching the entirety of this new generation could all be together in the same place and at the same time. Some contemporary writers were disappointed with what they saw – or perhaps were unable to work out the relationship between wild (or tame) consumption and wild revolution. Oz founder Richard Neville compared the Stones in Hyde Park to Prince Charles’s investiture (which also took place in 1969). “Similar solemn pageantry and shallow circumstance.” he notes in his book Play Power, “the same prostrate media and indoctrinated crowds.” Germaine Greer, writing in Oz, was sniffy about Isle of Wight. “Just a hype. The people don’t come to listen, but to adulate.”


“WHAT THE FUCK ARE YOU DOING HERE? SUNDAY NIGHT AT THE LONDON PALLADIUM, BEATLES, PINK FLOYD ITS ALL THE SAME SHIT.”

Mick Farren was involved in a putsch or counter-revolution at the Isle of Wight Festival to tear down fences and declare the festival free. Writing in IT in 1970 he reported that food was expensive and that many festival-goers ran out of money long before the event was over. Farren compared the situation to Czarist Russia – the rock stars were in the VIP enclosure but “kids were walking into the medical tent in a state of collapse because they hadn’t eaten for two days.”

A leaflet handed out on Parliament Hill during a free festival in 1969 was virulent. “WHAT THE FUCK ARE YOU DOING HERE? SUNDAY NIGHT AT THE LONDON PALLADIUM, BEATLES, PINK FLOYD ITS ALL THE SAME SHIT. YOU JUST SIT THERE ON YOUR ARSES AND JUST SOAK IT ALL UP.”

Parties followed the French Revolution, First Republic, Paris Commune and Cuban Revolution – legendary raves. The late ’60s kids didn’t just get around to shooting the ‘Establishment’ before they dished out the drugs and cranked up the volume. Elizabeth Nelson notes: “The counter-culture, in keeping with its revolutionary nature, staged its revolutionary festivals while actually trying to make the revolution.” Nelson also says the rock counter-culture was “more rebellious than revolutionary.”

And yet the laws that police festivals – the Night Assemblies Bill, the Criminal Justice and Anti-Social Behaviour Acts – also apply to sedition, to legal and illegal political gatherings. A mob, it seems, is always a mob. There is a crucial difference between a festival and a scout-camp, argues Michael Clarke in The Politics of Pop Festivals – the former is flammable material. “The Pop festival is inherently and deliberately unstructured and even anarchic…a gathering without a structure, whatever the intentions of the members, is readily categorised as a passive mob that might at any moment become violent.”


The worst riots were between the fans of Johnny Dankworth and Acker Bilk.

The first riot at an English music festival was at Lord Montagu’s Bealieu Jazz Festival in 1961. Fans attacked TV cameras and burned toilets. Montagu said: “The worst riots were between the fans of Johnny Dankworth and Acker Bilk” (‘trad’ vs ‘modern’ jazz). The early ’60s jazz festivals, argues George McKay in Glastonbury: A Very English Fair, were precursors to late ’60s events. There’s a picture of some people dancing at Beaulieu in McKay’s book – cool-looking kids in tight black slacks, denims and obsidian shades.

While the ’50s witnessed what sociologists call the emergence of fully-fledged deviants – Teddy Boys and rockers (and later mods) – there is a middle-class youth, music and protest culture at the CND (formed in 1958) marches from Aldermaston, home of the UK’s atomic establishment, to Trafalgar Square. In 1960 there were 32,000 on the five-day march and 100,000 gathered in the Square. There were jazz bands and reportedly people smoked dope. A generation “appeared from nowhere”, wrote Frank Parkin in Middle Class Radicalism, with “slogan-daubed crazy hats and streaming filthy hair, strumming aggressively on their guitars.” Protest, he writes, was “associated with festivity.”


Back to a market culture, back to wood-smoke, LSD, both faux and real Druidism, and grime.

The real terror was the Free Festival movement of the ’70s – Meigan Fayre, Windsor Free People’s Festival, Torpedo Town, Psilocybin Fayre – their names seem mysterious, as if they never happened – their story has been so perfectly marginalised. The largest was Stonehenge, which ran from 1974 to 1984, attracting around 60,000 in its final years. Accounts of the festival suggest a continuation of the ’60s counter-culture: drug/acid rock (Hawkwind’s ‘space ritual’), open drug-dealing, no obvious control structure, bands bringing their own stages, strange cafes like the Hells Angels marquee selling beef-stew and drugs – at times a kind of post-nuclear Medievalism…back to a market culture, back to wood-smoke, LSD, both faux and real Druidism, and grime.

The degree of affront can be measured in the nature of the response. On June 2, 1985, Wiltshire Police, under the direction of the Thatcher government, violently broke up the Peace Convoy at the Battle of the Beanfield, en route to Stonehenge. It’s hard to get an exact fix on the convoy – ex-squatters in vans, full-time travellers, part-time drug dealers, alcoholics, drug addicts. artists, greens – there are accounts they supported themselves on a mixture of benefits and trading at free festivals. “Up until 1985, the free festival circuit had provided the economic backbone of all year round itinerancy,” writes Jim Carey in Squall. Carey also reports that when police came to break up the convoy they worked with social workers who had care orders for the travellers’ children. The government, he writes, wanted to “annihilate” the traveller culture.

Attendance at Glastonbury swelled in the years after Stonehenge, by as much as 50,000. Mostly they were the last of the old England – the punks, the hippies, the LSD heads, the ex-Stonehenge punters, the pre-Thatcher generations who believed. They went to Glastonbury just to remind each other they still existed. Perhaps it was them who set the tone for criticism of the recently mainstreamed festival.

But festivals aren’t static; they reflect the world around them. So in summer 2004 there are huge corporate festivals and numberless small green, drumming, semi-private, alternative, fluffy, story-telling, circle-dancing, Buddhist and sweat-lodge hunkering festival. The mass of England happily opts for the corporate option and a handful of minorities revel, almost secretly, in their own sweet bunkers.