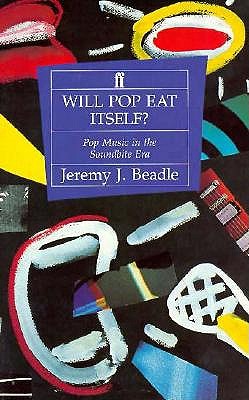 At the height of You’ve Been Framed‘s popularity, Jeremy Beadle sat down to pen this extended essay on “pop music in the soundbite era”. OK, different Beadle, but still deserving of your attention – for while in many respects Will Pop Eat Itself? has aged poorly (it’s certainly no surprise to find it’s currently out of print), its more general musings on the ramifications of sampling culture are as relevant now as they were in 1993. Just ask Diplo and Master-D. 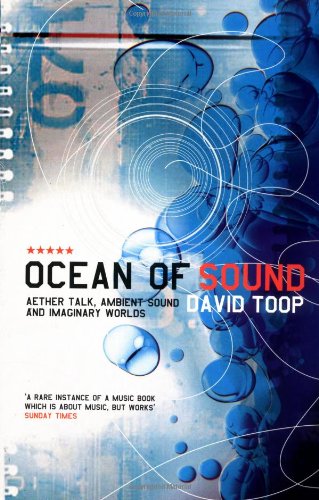 In a recent essay for The Wire, Simon Reynolds puts forward the notion that “we are all David Toop now”. It’s a provocative but considered statement intended to highlight the visionary nature of Toop’s critical writings, particularly ’95’s Ocean Of Sound, which prophesied a future musical culture defined by flux, mutability and “aether talk” – one which has quite plainly come to pass. Even if its soothsaying had proven inaccurate, Ocean Of Sound would still be a fascinating read: its erudite, elliptical narrative identifies fascinating resonances and linkages between disparate musicians and musics from around the globe, giving equal weight to Venezuela’s Yuekena Indians as it does to Eno, Larry Heard and The Velvet Underground. 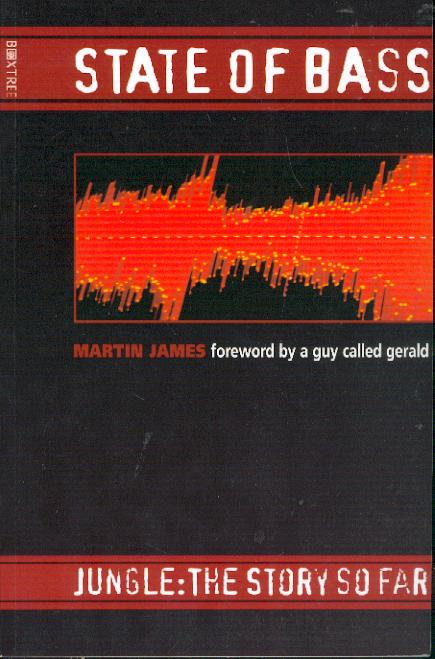 A bold if slightly foolhardy attempt to chronicle jungle before the dust had settled on its bassbins – ending as it does before Roni Size and Reprazent won the Mercury Music Prize (drum ‘n bass’s mainstream “moment”, and its death-knell), State Of Bass inevitably feels incomplete, not to mention lacking the poise that comes with a little historical distance. Still, given the absence of any better books dedicated to the same subject, this is well worth rattling through if you can track it down, and the combative foreword by A Guy Called Gerald alone makes it worth the (rather hefty on the second-hand market) price of admission. A revised and updated edition would be very welcome indeed – one was in fact mooted by the author a couple of years back, but it has yet to materialise. 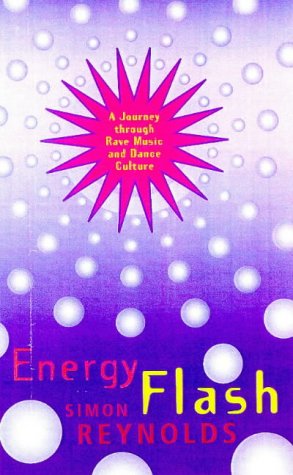 Reynolds’ Energy Flash is indispensable. It was the first, and remains the only, book to subject dance music to serious, searching critical investigation without once losing sight of the brashness, hedonism and hooligan opportunism that has informed some of the culture’s greatest innovations. Reynolds is warmly authoritative on everything from Detroit techno to Dutch gabba, but it’s the section on hardcore that inspires his most luminous, lyrical and insightful analysis. 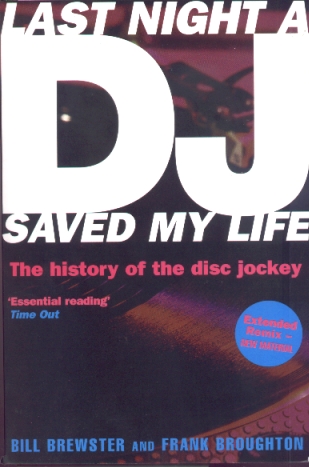 Brewster and Broughton’s attempt at a definitive history of the DJ – “dance music’s most important figure” – is probably the best short course in dance music lore available to the curious beginner. The authors adopt a far less theoretical and opinionated strategy than Reynolds in Energy Flash, choosing instead to tell their story plainly and methodically, relying heavily on quoted testimonies for colour and context. The hip-hop chapter is a hoot, but they’re particularly good on disco (which, lest we forget, was terminally unfashionable in 1999) and the origins of house. 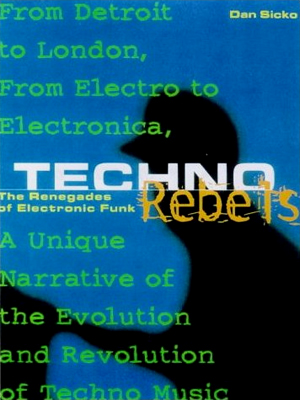 Though its hard to dispel the feeling that the great book on techno has yet to be written, Dan Sicko’s Techno Rebels is a worthy historical overview, and hasn’t been surpassed since its publication in 1999 (a revised edition appeared a couple of years ago). Warm, wise and rich in anecdote, the book is at its strongest when focussing on Detroit, particularly the cultural climate that gave rise to techno’s first wave, and it goes off the rails when it begins trying to track the global dissemination of the sound. 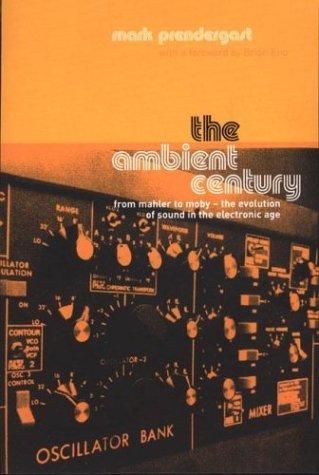 As its title implies, the net cast by The Ambient Century is a wide one. It’s unwaveringly chronological in its approach, but also functions as a neat listening guide and reference book. The first chapter in particular – looking at Mahler, Satie, Debussy, Cage, Schoenberg, Stockhausen and other giants of modernism – is engaging and accessible in precisely the way that Alex Ross’s The Rest Is Noise was not. Prendergast is strong too on minimalism, krautrock, prog and psychedelia, but despite their wisdom, later chapters on house, techno, jungle and trip-hop feel a little rushed, and there are some major omissions – industrial music, for instance, barely racks up a footnote. Sometimes, though, you just want someone with good taste to recommend you the best six or seven records from ECM, or Tangerine Dream, or Terry Riley, or Xiannis Xenakis – Prendergast does this expertly and companionably, and that’s why our copy of The Ambient Century is always close to hand. 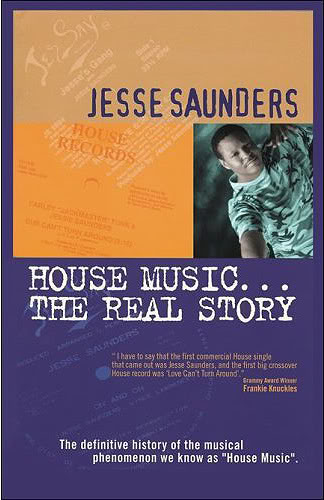 Jesse Saunders is a great house music producer; a great writer he is not. Even so, his first-hand account of house’s origins slips down easily enough, its literal, linear narrative delivering in historical detail and local knowledge what it lacks in flair. This is no rose-tinted memoir, but rather a tale of innocence lost, as Saunders finds his love of music tested by financial and legal mistreatment at the hands of an assortment of industry villains. As Les McQueen would say, it’s a shit business. 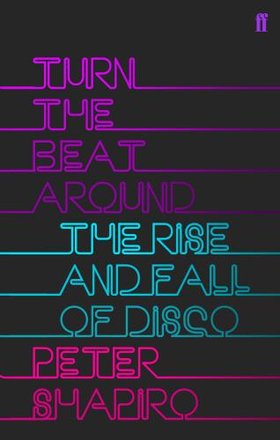 PETER SHAPIRO
TURN THE BEAT AROUND
(2005)

The market for disco nostalgia is an ever-growing one, and Peter Shapiro’s “secret history of disco” is hardly the first book to tackle such a subject. It is, however, a rollicking good read, which is more than can be said for, say, Tim Lawrence’s impenetrable Love Saves The Day. Shapiro has done his research, and he puts it to good use, conveying a strong sense of the social and economic conditions that gave rise to disco, sustained it and ultimately killed it off; but sometimes the music itself gets short shrift, so we suggest reading Vince Aletti’s The Disco Files in parallel for the full picture. 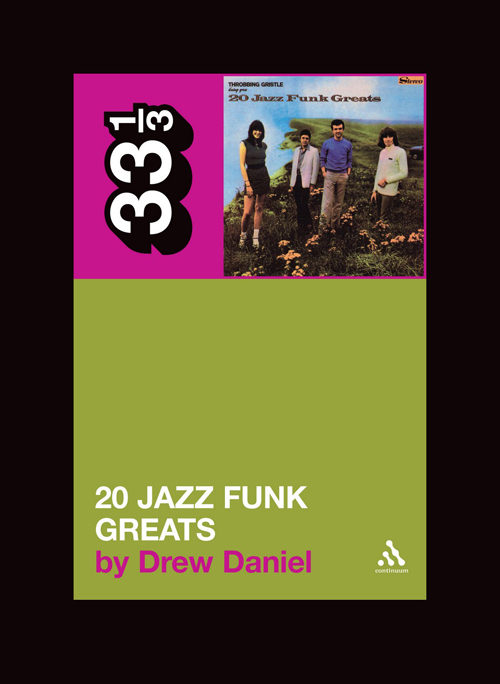 Continuum’s album-focussed 33 1/3 series is notoriously patchy, with terrific entries like John Darnielle’s Master of Reality vastly outnumbered by such irritating travesties as Matthew Stearns’ Daydream Nation. Drew Daniel’s 20 Jazz Funk Greats falls firmly into the former camp, a close reading of Throbbing Gristle’s masterpiece that takes a song-by-song approach and proceeds, as all good critical writing does, by quotation – relying mainly on new and exclusive interviews with all four of the group’s members (Genesis P-Orridge, Chris Carter, Cosey Fanni Tutti and the late Peter ‘Sleazy’ Christopherson). While it’s not the most comprehensive book about Throbbing Gristle (that accolade goes to Simon Ford’s Wreckers Of Civilization), it’s certainly the most readable and music-focussed, and though he makes no bones about being an incorrigible TG fanboy, Daniel is talented and learned enough not to be unduly cowed by his subject – he is, after all, both one half of Matmos and a respected English lit professor.