Shackleton – Music For The Quiet Hour / The Drawbar Organ 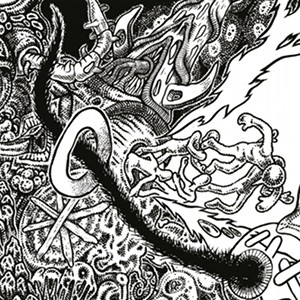 Released on: Woe To The Septic Heart LP

Surprise packages don’t come much more beguiling than Shackleton’s new box set, released with negligible fanfare last week. The bundle is certainly eye-popping. Across the cover, Zeke Clough’s faceless manikins twist and writhe in some Dantean tangle. Creak open the lid, and you’re confronted with three ravishing 12”s: xylems parp out smoke; aliens with beaks lurch out of the darkness; topless Olive Oil figures drive by in an armoured chariot. Shake the set, and a slip-case CD and a glossy magazine slide from side to side. The box is a wonder to (be)hold – a marvellous artifact. One has to resist the urge to bury it.

Which is fitting, because the notion of the ‘artifact’ is central to Shackleton’s work. From his classic Skull Disco 12”s (‘Blood On My Hands’, ‘Death Is Not Final’) through to his astonishing Three EPs collection, Shackleton’s music has always brought the museum to mind. His use of ethnographic signifiers (tribal chants, wax-cylinder vocal samples), coupled with the sparseness of his compositions, give his work a sense of academic remove. Indeed, listening to Fabric 55 is akin to gazing over a repository of trinkets: axeheads, smudged brass, pickled heads with shriveled grins. 2011’s Pinch And Shackleton had its vibrant moments, but, by and large, Shackleton sticks to the grey areas

Shackleton’s latest transmission comprises two new releases proper: the CD-only Music For The Quiet Hour, and a trilogy of vinyl 12”s titled The Drawbar Organ EPs. Although both records are housed together under the same immaculately illustrated roof, they show Shackleton pulling in different directions. Of the two, Music For The Quiet Hour is the more revelatory: a five-part, 65 minute suite that constitutes arguably the biggest curveball in the Berlin-based producer’s career.

Music For The Quiet Hour was initially conceived as a 12″ to accompany a planned new album. As the project grew in length and scope, it became apparent that the 12″ had dwarfed the mooted full-length. This sense of plenitude – of exuberant overspill – runs throughout the piece. Shackleton’s production style is usually famously meticulous and (artifacts again) artisanal. Music For The Quiet Hour, however, resembles automoatic writing, Shackleton’s hand journeying without destination across staff paper. Essentially an hour of bricolage, the record is much closer in spirit to Stockhausen than it is to Skull Disco. The Xerox hum of the first movement give way to jolly marimba in the second; Reich-indebted phase programming is drowned out by the recordings of the ocean. Dark spots are superseded by stretches of brightness (intriguingly, segments of the suite sound almost exactly like twinkly Estonian composer Peeter Vähi). Forget quiet hours: this is music for tumbling down rabbit holes.

One of the advantages of long-form composition is the potential for storytelling. Music For The Quiet Hour isn’t the first time Shackleton has investigate this sort of territory; his 2010 theatre project Refugees Of The Septic Heart saw him extending his vision into different media altogether. On the evidence of Music For The Quiet Hour, Shackleton’s a dab hand at crafting music with a strong sense of narrative. Central motifs, such as the wheezing organ figure in Parts 3 and 4, return at regular intervals, and there’s a wonderful sense of ebb and flow throughout. Less successful are the moments where frequent collaborator Vengeance Tenfold potters up to the mic. His laboured mumbo-jumbo – “voices of a single roster of infinite pleasure” – is often fantastically irritating. Music For The Quiet Hour is a wonderfully expressive piece, and the last thing it needs is awkward cod-profundity. For sure, Music For The Quiet Hour is a successful departure – but you occasionally wish Shackleton would know when to keep his collaborators quiet.

The Drawbar Organ EPs, by contrast, are Shackleton to a T. Over the three discs, the producer continues on the journey he first began with 2004’s ‘Stalker’ 7″: making koanlike dance music with an emphasis on the  high-end, the low-end, and little in between. From opener ‘For The Love Of Weeping’ through to set closer ‘There Is A Place For Us’, Shackleton continues to refine his curious craft.

The major development is the introduction of the titular ‘drawbar organ’ into his sound. For someone so used to delicate textures, Shackleton’s playing is sometimes oddly heavy-handed. The ‘Organ Donor’ ostinatos on ‘Seven Present Tenses’, for example, sound more than a little clunky. As the pootling trills and My First Organ patterns cycle by, you sometimes catch yourself giving Shackleton the benefit of doubt. Elsewhere, however, the effect is redemptive. On ‘Katyusha’, the bold organ tones add a welcome degree of jauntiness, and there’s a general levity to proceedings throughout. Nothing on here is as abrasive as, say, The Three EPs’ ‘Mountain Of Ashes’. Considered as a package, The Drawbar Organ EPs is probably Shackleton’s brightest release. Shade on a sunny day, then, rather than a candle in the dark.

As regards old tricks, Shackleton is as effective as ever. ‘It Is Not Easy’ and ‘Powerplant’ could slot onto The Three EPs and hold their own without much difficulty. Shackleton’s work has always pulled from more than one playbook, and he synthesizes his influences with unprecedented finesse. ‘For The Love Of Weeping’ falls halfway between techno and Shangaan Electro, bringing a tumescent low-end in line with frenzied marimbas. Elsewhere, a tribal rhythm seamlessly give way to a baroque organ cadenza. In the past, Shackleton’s samples have occasionally sounded like novelty additions, tsotchkes perched on a backpacker’s mantelpiece. He sometimes falls into the same tourist trap here, but, more often than not, he wears his pan-globalism well.

There’s a moment on Drawbar highlight ‘Powerplant’ that nicely sums up Shackleton’s enterprise. From the off, a queer sound intrudes into the mix. The tone is ambiguous: it could be a plucked zither, a digital crackle, or the twang of a rubber band. It’s not clear if this is sampled or live, silly or straight-faced. In the same way, Music For The Quiet Hour / The Drawbar Organ EPs hovers between moods. Music For The Quiet Hour tilts from the sublime to the ridiculous, and enchants along the way. The EPs, meanwhile, show Shackleton elaborating his strange, creepy, weird old sound. It’s not without faults, but overall it’s a undoubtedly a very welcome gift.