If there’s one thing horror fans can agree on, it’s the importance of writer, director, composer and all-round Renaissance man John Carpenter.

His run of films from the mid ‘70s to the late ‘80s remains one of the most glorified of any cult filmmaker on the planet, and is unique in that his scores are as widely appreciated as the movies themselves.

Carpenter’s story begins in earnest in 1974, as he was piecing together his first ‘proper’ film, Dark Star. Working around a tiny budget, he was disappointed by the composers he interviewed to work on the score (they “seemed weird”), and decided to take the “cheap and fast” route and produce the music himself. His father was a musician and had forced Carpenter Jr. to learn the piano at an early age, so the concept of recording a soundtrack to the film wasn’t out of the realms of possibility. While he is quick to admit that he couldn’t “read or write a note”, he could “play any keyboard”, and he realized that he really didn’t need to do much else. With a couple of synthesizers, he could “sound big and powerful”, and layer any parts that would usually require more complex performance, so there wasn’t any sense in wasting money on another member of the production team.

The themes were deceptively simple – the spine-chilling piano motif that characterizes 1978’s Halloween, for example, has become so ubiquitous that it’s easy to overlook its complexity. You’ll no doubt hear it each year as the month of October comes to a close, but listen closely and you might catch that Carpenter wrote the theme in the relatively unusual 5/4 time signature. It’s these subtle touches that have made Carpenter’s catalogue of scores so enduring – it was the age of progressive rock, but he wasn’t lavishing his compositions with needless glitter and tricks. Rather, there was a sense that he was able to strip things to the bone, and, like the movies themselves, the results were often stark and terrifying.

Whether it was Escape From New York‘s mutant disco, Big Trouble In Little China‘s occidental ’80s electronica or Assault On Precinct 13‘s slithering proto-electro, Carpenter managed to put his mark on a plethora of genres with what appeared to be an air of disarming effortlessness. Sure, the director’s more recent works have been less enthralling (we suggest stopping at In The Mouth Of Madness) but no matter what he does, nothing will ever dampen the impact of his astounding legacy.

We’ve compiled a list of 10 of John Carpenter’s most outstanding compositions, and just in time for Halloween – don’t be afraid.

Note: This list is a part of a series of Halloween-friendly beginner’s guides. Also profiled: the work of video nasty legend Richard Band; the essential releases by Italo horror go-to Fabio Frizzi; and the output of storied horror trailblazers Goblin. 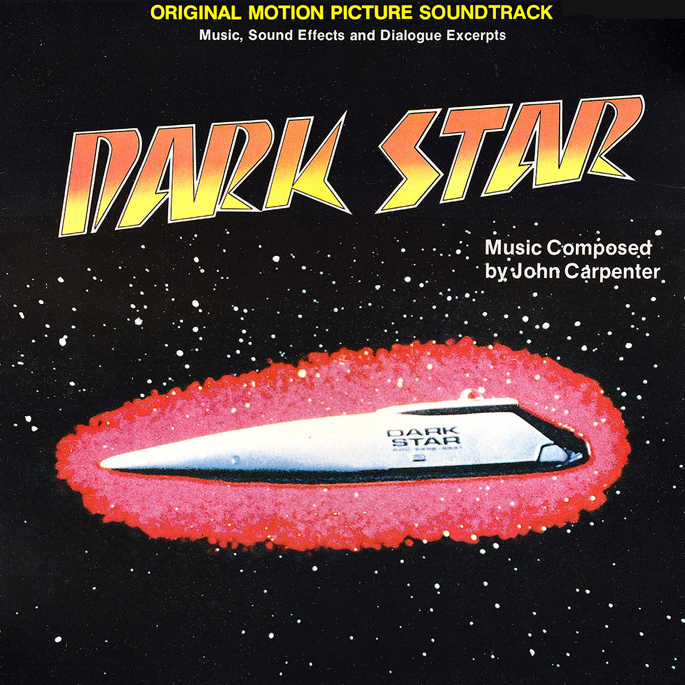 There’s something charmingly naive about John Carpenter’s first score, which went alongside 1974 rag-tag sci-fi comedy Dark Star. Carpenter famously handled affairs himself to save money, but it wasn’t that simple – what he could do with a synthesizer even without a boatload of technical skill dwarfed what plenty of traditionally more accomplished composers spent years trying to nail. Mostly improvised as Carpenter let the film roll, the gurgles, bleeps and alien tones were an apt representation of the innovative visual material, and it’s not hard to hear why the director holds the pioneering score for 1956 sci fi classic The Forbidden Planet in such high regard. 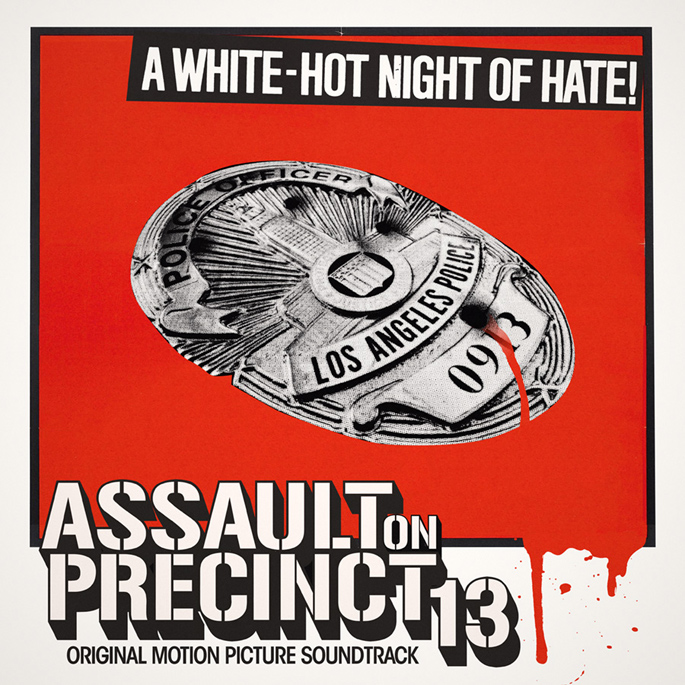 If Carpenter’s Dark Star cues were an attempt to feel out new territory, then Assault on Precinct 13 was his true statement of intent. The film’s ominous theme not only captured the claustrophobic terror of the film itself, but also was the first time we heard just how memorable Carpenter’s melodies could be. It was a theme that would be re-appropriated time and time again, and serve as the catalyst for countless electronic productions, and yet Carpenter’s version still stands tall above all of the others. There’s something about the restrained percussion that just sounds so ahead of its time, and there’s a damn good reason why it still sounds so absolutely perfect over 35 years later. 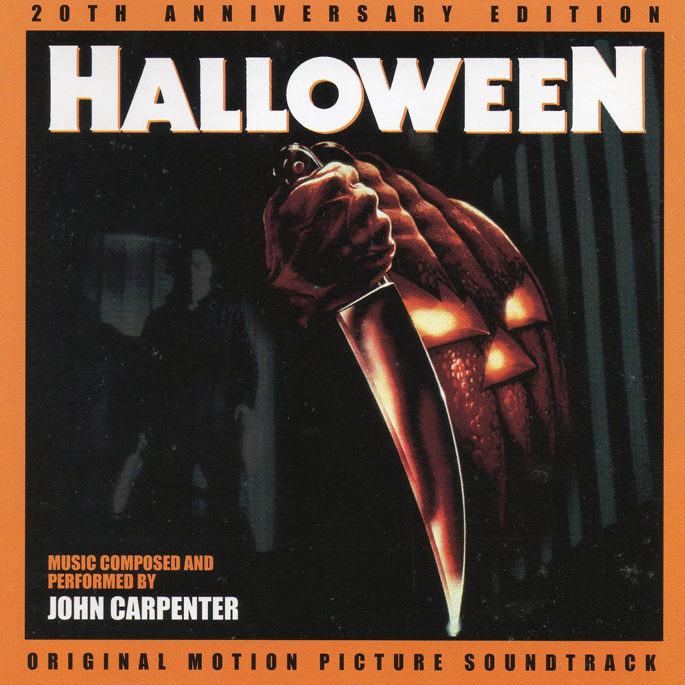 It’s arguable that John Carpenter’s iconic ‘Halloween Theme’ is even more widely known than the film itself. While the movie spawned countless sequels, there’s one thing that people really remember from the film, and that’s not Michael Myers’ mask or Jamie Lee Curtis’s screams – it’s that teeth chattering piano motif that has served to define the slasher genre ever since. It’s the simplicity that makes it so effective, and while the time signature is a little tricky, there’s barely anything else going on – all Carpenter needed was a single melody haunted by a few carefully placed synth sounds and that subtle cycling rhythm. It feels as if it’s about to fall apart any minute, and that’s why this original version still stands as the best. 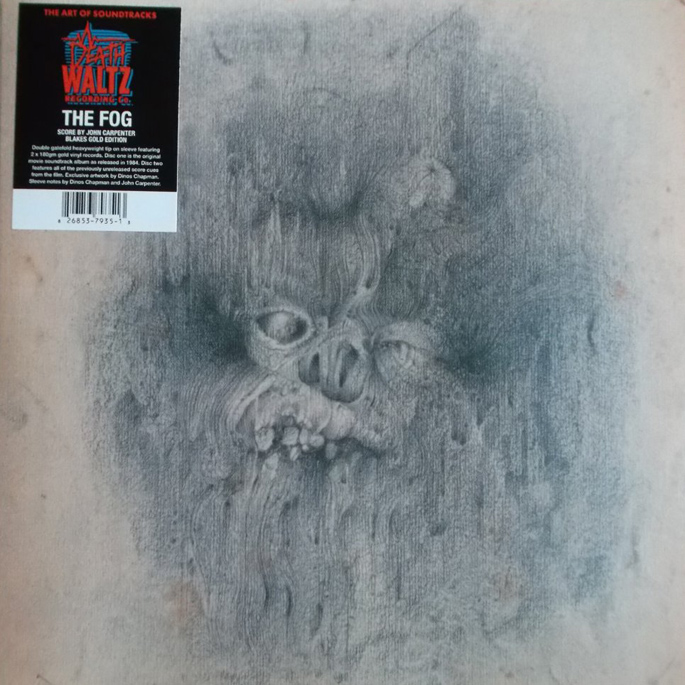 John Carpenter
‘Tommy Tells of Ghost Ships’
(From The Fog, 1980)

One of Carpenter’s most eerie horror soundtracks, The Fog is wisely balanced on his smart sense of restraint. Spacious, uncomplicated piano motifs sit over wavering, detuned synthesizer pads and thick, brassy basses and the result even now is absolutely terrifying. The film itself may have lost some of its bite thanks to some shaky effects and generations of cynicism, but this set of tunes will never lose its disturbing appeal. 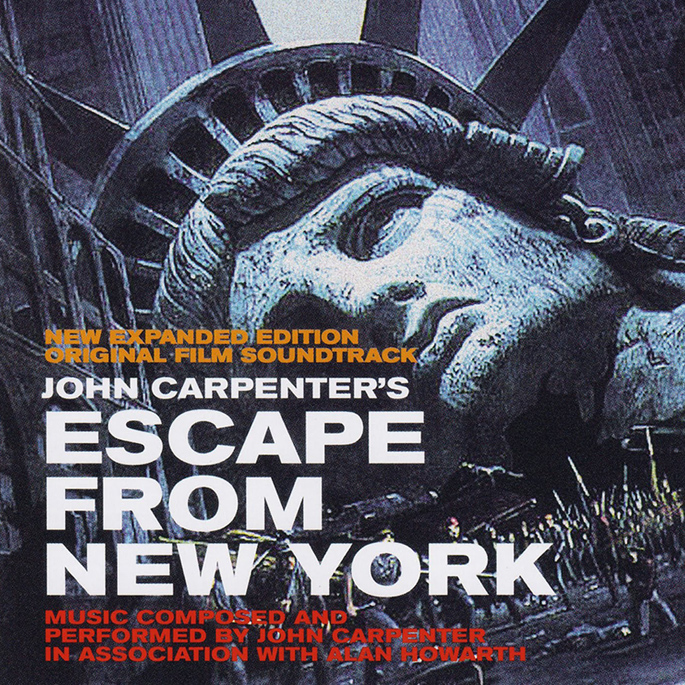 John Carpenter’s professional relationship with synth technician Alan Howarth would prove to be one of his most important – he was hired to tinker with the sound effects on Escape From New York, and Carpenter was so impressed he invited him to help compose the cues. The result was a soundtrack that boasted a level of precision and technical prowess that its predecessors simply didn’t contain – Carpenter’s melody-rich themes are elevated somehow. It’s hardly surprising that this score is one of Carpenter’s most acclaimed, and ‘The Duke Arrives/Barricade’ is a shining example. Howarth and Carpenter manage somehow to spike the composition with a grotty New York disco beat without losing the grizzly mood in the process. There was even an extended version made at the time by Mario Boncaldo for DJs who wanted to try it out on an actual dancefloor. 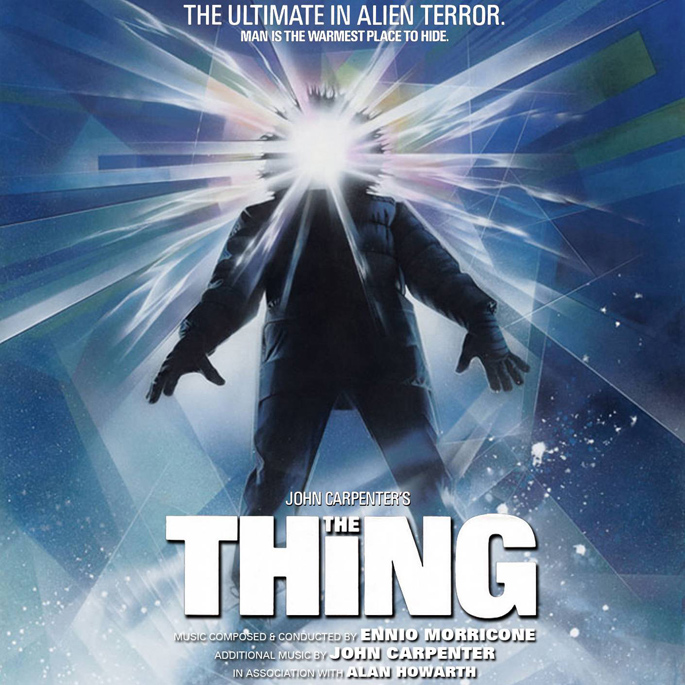 We know, we know, Italian soundtrack don Ennio Morricone composed the score for 1982’s The Thing, and did his best John Carpenter impression in the process, but the story doesn’t end there. Carpenter and Howarth also put together a number of pieces, one of which is the eerie ‘Fuchs’, which utilizes the whining synthesized drone that should be immediately familiar to anyone who’s watched the film. In contrast to Morricone’s mostly orchestral treatment, Carpenter yet again shows the value of patience. Morricone’s abrasive strings and Herrmann-influenced tropes are effective enough, sure, but with a single note Carpenter manages to sum up an entire movie’s worth of teeth-clenching tension. 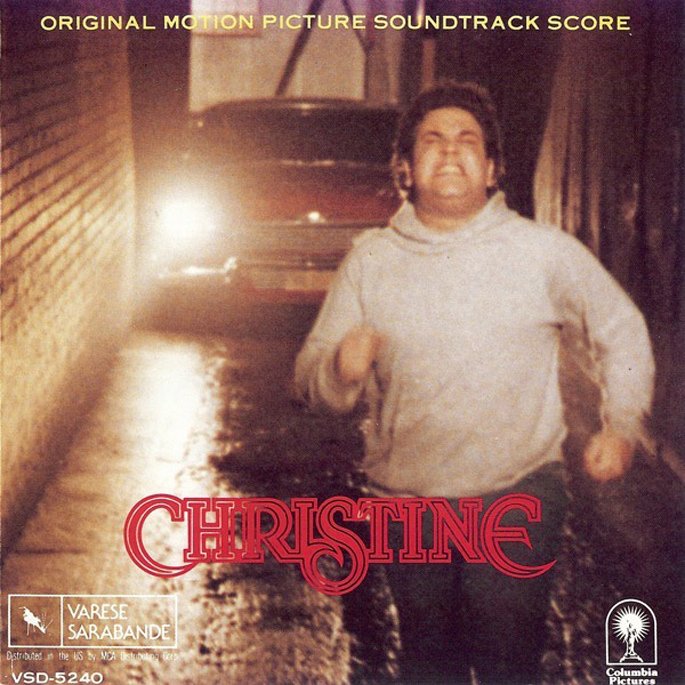 John Carpenter & Alan Howarth
‘Obsessed with the Car’
(From Christine, 1983)

There’s no good reason as to why John Carpenter’s moody Christine score isn’t as widely appreciated as many of his others, but sometimes that’s just the way it goes. The film itself was a modest success, but maybe doesn’t have that cult-y Carpenter pizzazz you might find in many of its predecessors. Still, its soundtrack is another synth-heavy masterclass, and again finds Carpenter teaming up with Alan Howarth. ‘Obsessed With The Car’ is one of the score’s most low-key cues, and is noteworthy simply because of its beautiful, unhurried simplicity. It’s like a fluffy, good-natured version of The Fog’s eerie minimalism, but in the warm, molasses-slow pads and cooling melodies there’s just a hint that something’s very wrong indeed. 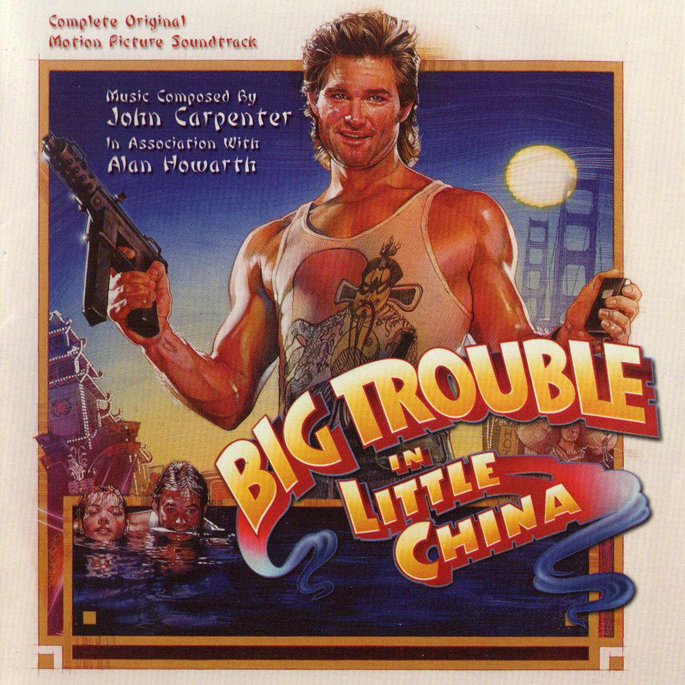 In many ways Big Trouble In Little China was the beginning of the end for Carpenter’s mainstream career. His ability to transform low-budget horror movies into Hollywood money-spinners was one thing, but handling a starry family-friendly action movie proved to be the death of him, at least for a while. The film cost a massive (at the time) $20m to make, and only brought back half of that in revenue. It’s a more sophisticated score than Carpenter and Howarth’s previous collaborations, and ‘White Tiger’ sports a host of sino-electronic sound module sounds, giving it an undeniably peculiar focus. It almost sounds like Steve Reich’s Music For 18 Musicians, albeit on a much tighter budget. 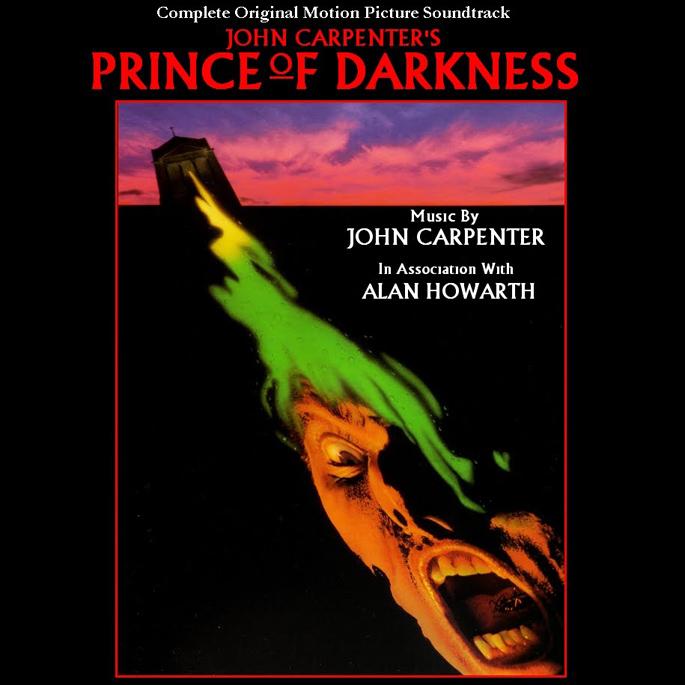 The second installment of John Carpenter’s ‘apocalypse trilogy’ (along with The Thing and 1995’s underrated In The Mouth of Madness), Prince of Darkness was a return to the bargain basement for the wounded director. Thankfully for those of us who relished the opportunity to see him working within constraints once again, the director still managed to retain the unshakable bizarre mood that had catapulted him into the mainstream in the first place. The soundtrack itself might not contain the overt melodic content of, say, Assault on Precinct 13 or Halloween, but it’s texturally dense and shows Carpenter and Howarth’s progression and willingness to experiment with the electronic equipment at their fingertips. 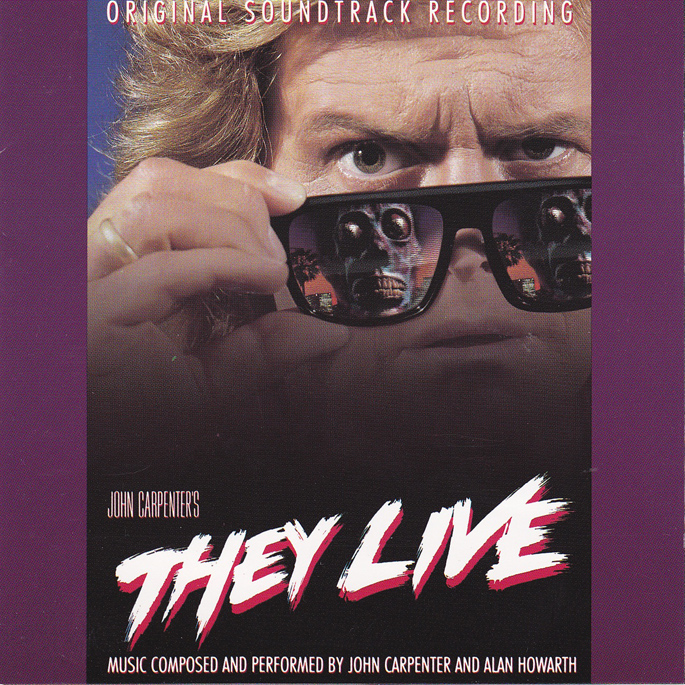 John Carpenter/Alan Howarth
‘Wake Up’
(From They Live, 1988)

They Live is like a fine wine and it’s taken a few years for its deep, complex flavours to actually reveal themselves. The ‘Rowdy’ Roddy Piper starrer was lambasted by critics on its release, but since 1988 has entered the hearts and minds of fans and hacks alike thanks to its unusual political slant and memorable dialogue. The soundtrack wasn’t Carpenter and Howarth’s best work by a long shot, but with a blend of crooked metal guitar slices and Escape-era beatbox drums, it’s engaging enough for it to dwarf their subsequent efforts.