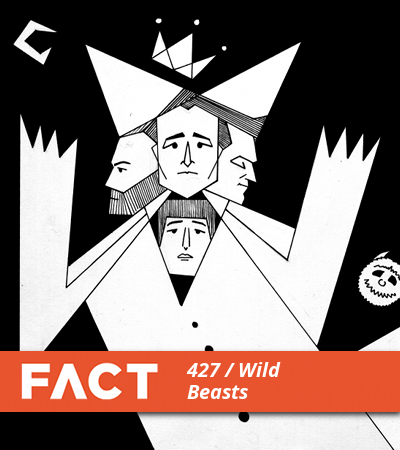 This week’s FACT mix comes from one of Britain’s finest bands.

Wild Beasts‘ trajectory over four albums has seen them constantly paring down and stripping back, distilling their innate theatricality and eccentricity into ever cleaner and simpler forms. The art-rock quartet, whose roots in the rural north of England have long informed their desire to remain outsiders to the mainstream indie rock circus, seem to have performed a turning inwards over the years, which reached its acme on the sleek, polished edges of 2011’s Smother.

On their new album Present Tense, Wild Beasts find themselves at a self-imposed square one, rid of the baroque flourishes that animated their early records and expressing their typically weighty lyrical concerns – sex, death, class, more sex – with a newfound clarity. “Everything on this record is as small as it could be,” as frontman Hayden Thorpe recently told Pitchfork.

For their FACT mix, they’ve put together an almost perversely eclectic tracklist ranging from their own sonic touchstones (Talk Talk, Cocteau Twins) to English folk (Shirley Collins), Norwegian black metal (Burzum), composers and poets (John Tavener, Siegfried Sasson) and, well, Lil B. Catholic as tastes may seem, you can actually detect a facet of Wild Beasts in every selection – an alternative portrait of a band now fully matured.

There’s also an exclusive Leonard Cohen cover (initially recorded for a single competition winner) and Kate Bush’s version of ‘Sexual Healing’ recorded on a phone – as the band explained to FACT, they’re often trawling their mobiles “for that magic sonic fragment”. “Perhaps because phones are now just an extension of ourselves it feels natural to record with them – the terror of the red recording light never takes effect.”

There were no singular inspirations for Present Tense but rather we embraced the chaos of sensory overload experienced today. We live within reaching distance of more music than we could listen to in a lifetime and a big part of the process of creative work is judging what is useful and what is just noise. The Leonard Cohen cover was something we did for a competition winner, it exists only on our hard drive and on the winning prize, a cassette tape. For any Leonard Cohen fan doing a version of one of his songs is a right of passage. Kate Bush’s cover of ‘Sexual Healing’ represents the meeting of Venus and Adonis, surely the sexiest musical proposition ever. Sometimes phone recordings can capture something mysterious. We’re often trawling our mobiles for that magic sonic fragment, trying to decode what made it work. Perhaps  because phones are now just an extension of ourselves it feels natural to record with them, the terror of the red recording light never takes effect.