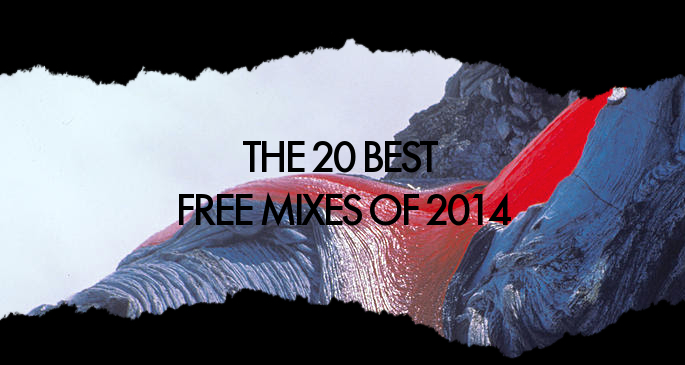 It’s the end of the year, and you know what that means – lists.

In 2014, the line continued to blur between free releases and proper albums and we all reaped the benefits. It’s been easier than ever to pull brand new music from the web – cheaply and legally no less – and FACT have made sure to hack through the digital jungle in search of the very best examples.

This is a selection of the 20 best free mixes of the year, mostly pulled from our weekly round-ups that you can look out for every Friday.

Houston beatmaker Rabit has been firing out syrupy Pandemic Transmission mixes for the last few months and they might be our favorite series of shows this year. Used as a way for him to explore ideas and blend grubby long-form drones with derailed rap and spacious grime, Rabit has laid out a template for his next releases and we can’t wait to hear ’em.

We’re going to come clean – the very concept of this latest mix from ex-Arab Strap man Aidan Moffat was enough to pique our interest alone; the fact that it’s actually bloody brilliant, well that’s just a lucky bonus. Moffat did the world a favor here, and swept up a host of accidentally spine-chilling Disney ditties, melting them into each other with the same skill he exhibited on the last handful of L. Pierre records.

Lorenzo Senni took the trance train again with this killer blend for Dummy, splicing his own ethereal compositions with a bunch of other euphoric goodies that, to be quite honest, may as well have been his own. It’s compelling stuff from beginning to end (whether you’ve rinsed his last couple of LPs or not), and we can’t help but think that this time next year everyone’s gonna be boshing out MDMA-addled instrumentals like it’s going out of fashion.

This was far from Mumdance and Logos’ first selection of slippery ambient jams (a subgenre they’ve labeled “weightless”), but we’re suckers for the duo’s continuing mission to mine the best droning beauties the world has to offer. As usual there are some obscure corkers scattered around here, drifting coolly in-between jams from both producers, filling in the cracks like harmonic, synth-led polystyrene cement. When beats eventually emerge they’re spacious, tape-damaged and slightly broken – just the way we like ‘em.

The long-form explorative nature of Ripatti’s early Vladislav Delay material is still present throughout this ace mix, but these new tracks are well trimmed and economical without losing any of the grit and grind. It’s also remarkable how original this stuff is – after a period of awkward records spurred on by his time in Berlin it feels like Ripatti is back to producing material that is absolutely impossible to mistake for anyone else. He’s a true original, and this 40-minute mix is about as good as modern experimental electronic music gets.

DARK0
MUSIC TO… ORBIT THE MOON TO

As always, heavyweights Yasunori Mitsuda (the Chrono series) and Hitoshi Sakimoto (Final Fantasy) loom large, as does Alexander Brandon’s soundtrack for cult-classic Tyrian. There’s also sonically similar material, ranging from Jon Brion-sampling dream pop, gauzy How To Dress Well favorites and even some Burial. At a time when his contemporaries Mr. Mitch and Strict Face are exploring the softer sides of grime, it’s been great to hear Dark0 strip the music to its essence, too.

As we pointed out when he kicked off the year’s FACT mix series, no one is approaching instrumental grime quite like Murlo. His livewire constructions — all synth arpeggios, irresistible melodies, and waist-wining riddims — are heavy with technicolor vibes that get us all woozy with synesthesia. Here he continued to draw from everything from bashment to bassline for an über-contemporary take on carnival music that simply does not let up.

Nguzunguzu’s first Perfect Lullaby mix is a classic, from the duo’s harp edit of ‘The Boy Is Mine’ on down. Thankfully, Asma Maroof and Daniel Pineda sequel retains the same approach that has made previous mixes so essential. As always, their approach to sourcing club tracks reinforces why they’ll never be tagged as appropriators: their own excellent zouk and kizomba edits sit comfortably next to those by producers from around the world, not by johnny-come-lately “global bass” fetishizers. The tracklist should have serious Internet crate-diggers heading for Soundcloud, Hulkshare and Sharebeast. Politics aside, authentic music just sounds better.

A teaser to the producer’s debut album Pixel Wave Embrace, this ultra-soothing bath-to-bedtime mix combines mellow Japanophilia (of the Fairlights, Mallets and Bamboos variety) with breezy dreamcatcher vibes, birdsong, ominous RPG moods and a whisper of the grime influence felt more strongly on the album.

DJ Mustard has become quite the fixture around these parts, but there’s a damn good reason for it. Mustard’s skeletal ratchet productions have been totally dominant this year, and Southern Hospitality in their infinite wisdom stitched together a handful of the L.A. staple’s finest for our listening pleasure. We haven’t been able to get if off our stereo since.

Honestly, mad respect to anyone who’s asked to splice together a mix and instead decides to turn in a convincing live jam that never once descends into meandering narcissistic drivel. Xosar urges us to realize that the mix was recorded “in a delirious state” in the early hours of a Berlin morning – with broken gear no less – but the specifics shouldn’t matter at all as it’s as concise and involving a set as you’re likely to hear.

Slimzee’s reputation should precede him – the pirate radio stalwart and Pay as You Go Cartel member is a legend at this point, and with damn good reason. On this mix for The Fader, he went back to his roots and grabbed a selection of silky UK garage belters, the kind of smooth grooves you would have heard if you’d spent any time knocking around clubs in a pair of fancy patent-leather shoes and a Moschino shirt in the late 90s.

M.E.S.H.
FUNCTIONS OF THE NOW VII

M.E.S.H.’s Scythians EP for PAN is a thing of rare beauty, so we jumped at the chance to get our hands on this brief look into the Berlin-based producer’s record bag. It’s no disappointment either, and while it’s a little short, clocking in at just over half an hour, M.E.S.H. packs in tunes by the boatload, blending his own tunes (the David Firstly remix of ‘Captivated’ that opens the mix is huge) with selections from weirdo operators like Desto, nu-grime figureheads Mumdance and Rabit, and even Mario and Nicki Minaj (admittedly remixed by DJ Irressistable).

In the Trauma Center is Pat Maher’s first long-form Yo-Yo Dieting drop in years, and instantly throws us back into a world of mangled, discarded Southern rap bangers and painfully distorted (and often heavily filtered) acapellas. The vocals become soupy bass tones or hoarse moans, and beats are shoved in and out of any sensible rhythmic template with ease, resulting in a tape that’s as challenging as it is rewarding. Noise and rap have never been the most comfortable bedfellows, but when it’s done right it’s hard to ignore.

DJ/Rupture returned with a selection of music that wasn’t immediately obvious to the Western ear, masterfully blending psychedelic music, folk and traditional sounds with more contemporary pieces from Holly Herndon and Throwing Snow. If there’s anyone else putting quite so much thought into mixtapes right now, we have yet to hear them – Stage Boundary Songs is as unmissable as they come.

His hour-long offering for i-D chronicles his impressive year, and offers a glimpse at what’s to come. Along with an unreleased collaboration with MikeQ and an edit of ‘Bring in the Katz’, don’t miss offerings by TekLifer DJ Taye and Jersey club youngins DJ Kiff and DJ Problem.

In Slow’s world, Oneohtrix Point Never’s ‘Chrome County’ is perfectly birthed from PARTYNEXTDOOR’s underrated ‘Make A Mil’, and Coon Daddy & DJ Godfather’s ghetto-house anthem ‘See U No Mo’ is equally suited sidling up next to James Ferraro’s sickly ‘Rata’. Slow’s inventiveness and persistence pays off, and there are few other DJs with the same ability to mash together such an eclectic set of tunes without it sounding irksome and itchy.