“Everyone is waking up”: Tanya Tagaq on fighting for justice and singing for Björk

Protest music has found an avant-garde champion in the formidable grunts and howls of Inuk throat singer Tanya Tagaq. April Clare Welsh finds out how the First Nations activist and Björk collaborator is using her platform to shine a light on Canada’s dark history.

Last week over a million Facebook users “checked in” to Standing Rock Sioux Reservation in North Dakota in an effort to disrupt the police crackdown on activists protesting against a new oil pipeline. The construction of the Dakota access pipeline, which jeopardises the Standing Rock Sioux tribe’s water supply and threatens sacred tribal sites, has opened up a wider dialogue about the rights of the 400 million people who make up the world’s Indigenous populations. But it is also indicative of a movement that unites environmentalists, anti-capitalists and human rights activists with First Nations people – a movement which Inuk throat singer Tanya Tagaq has fearlessly championed through her visceral songwriting and head-turning performances.

When her 2014 album Animism beat off competition from Drake and Arcade Fire to scoop Canada’s Polaris Music Prize, she performed at the ceremony in front of a long list of names of murdered and missing Indigenous women. The win raised Tagaq’s profile dramatically, bringing her 21st century invocation of a folk tradition to a global audience – and building a platform for her most “aggressively political” album yet, Retribution.

Tagaq believes that online activism like the virtual mob that flocked to Standing Rock has become “absolutely crucial” in the global fight for Indigenous rights. “Indigenous people have been fighting for the planet for a very, very long time,” she says, “but everyone is waking up to it now. You see these elders engaging in peaceful protests and getting pepper-sprayed by billionaire companies that just want more money – in 2016 that’s just unacceptable. Too many people are awake to accept that behaviour.”

“What we’re doing to [the planet] is cancerous and evil”

After the success of Animism, Tagaq’s intense touring schedule prompted a move from the isolated Arctic community where she was born to Canada’s biggest city, Toronto. Tagaq was raised in Nunavut, the largest and northernmost territory of Canada, which comprises most of the country’s Arctic Archipelago. Her hometown, the tiny community of Cambridge Bay (known as Iqaluktuutiaq in the Inuinnaqtun language) is inaccessible by road. Nunavut has population of fewer than 40,000 across its two million square kilometres, and many of its Inuit communities live in isolation. Their plight takes on many forms: the poverty that blights 60% of First Nation children in Canada; the fact Inuit women are four times more likely to be murdered than any other ethnic group; and the environmental destruction wreaked by Canada’s vast oil sands industry.

Tagaq herself is a survivor of Canada’s notorious Residential School System, a forced assimilation programme which operated from the late 19th century right until 1996, taking Indigenous children away from their communities and placing them in boarding schools around the country. Around 6,000 students died during the residential schools’ existence, and sexual and physical abuse was endemic – though Tagaq emphasises that she doesn’t carry personal pain from her time at high school: “I wouldn’t want to take anything away from the people who suffered the massive indignities themselves.”

The Canadian government issued a public apology for the programme in 2008, followed by the publication of a 4,000-page report containing the testimonies of survivors. But Tagaq says that there are still many things the government doesn’t want the public to know: the use of electric chairs to administer punishments; children being forced to eat their own vomit. It’s “my job” to give out this information, she says – but as her music is largely wordless, it’s through her performances, her social media presence and interviews that she can spread information.

In May this year, Canada officially ended its opposition to the UN declaration on the Rights of Indigenous People, almost a decade after it was established by the UN General Assembly. The move was spearheaded by Canada’s prime minister Justin Trudeau, the Liberal Party leader who has been praised by progressives for his stance on issues like climate change, refugees and drugs. But Tagaq is yet to be wooed by Trudeau. Among his missteps, he has come under fire for not honouring his funding commitment to the Indigenous population, and has remained silent on the controversy over a hydroelectric plant being constructed at Muskrat Falls, upstream from an Inuit community.

Retribution arrives as Canada is facing up to some of the darkest moments in its history, but there is still a long way to go. “There has been all this talk about reconciliation and righting the wrongs,” Tagaq says. “But when are we going to acknowledge the mass graves of the children from residential schools here? When are we going to get actual numbers?” 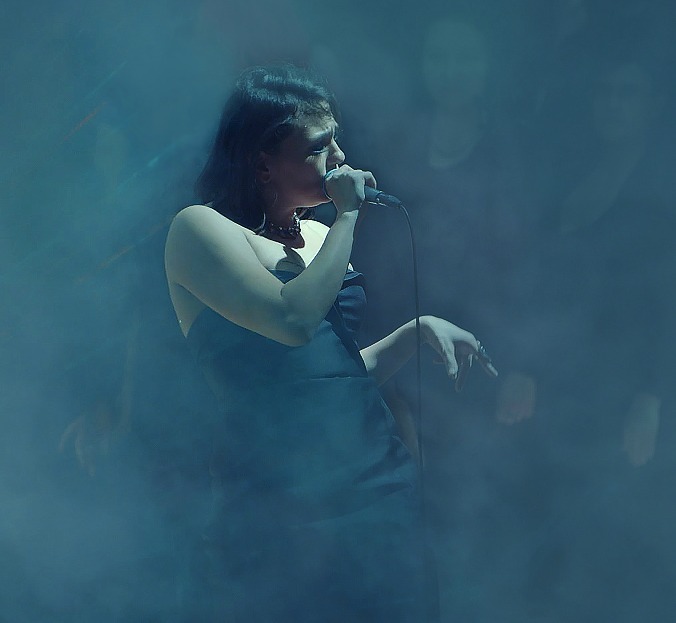 “Björk is the type of person that if your wine glass is getting empty, she’ll come and fill it up”

The album touches on a several themes, but at its core it is a conceptual record about rape: “Rape of women, rape of the land, rape of children, despoiling of traditional lands without consent.” Since she was introduced to Inuit throat singing as a teenager – a vocal breathing game traditionally practised by duetting women while the men were out hunting – Tagaq has spent over a decade developing her own distinct and modified take on the technique as a solo artist.

Before the release of her debut LP, Tagaq was tapped by Björk to contribute to 2004’s Medúlla, an album built almost entirely from voices. Working with the Icelandic artist was a formative experience. “She might be one of the nicest people I have ever met,” says Tagaq of her former collaborator. “She’s very, very, very down-to-earth. I know the media likes to paint her as this eccentric, and of course as artists we are eccentric – but by what standard? I find anyone who gets up and stands behind a desk at a bank for eight hours a day weird. The thing that surprised me the most about Björk was that she could switch from producer mode to creative really quickly. She’s just very much a genius. And she’s a great cook. She’s the type of person that if your wine glass is getting empty, she’ll come and fill it up. I’ll defend her to the death – if anyone has a bad word to say about her they’ll get an earful from me.”

After their collaboration she released three albums – 2005’s Sinaa, 2008’s Auk/Blood and 2011’s Anuraaqtuq – before the Polaris win for Animism gave her profile an international boost. With Retribution, what started as a paean to our fragile planet soon grew into a howling, screaming protest about environmental destruction and the violation of Indigenous and women’s rights. “What we’re doing to [the planet] is cancerous and evil,” she says, “and we need to reign it in.”

The album is both a virtuoso display of vocal acrobatics and a largely wordless political manifesto. Like Animism, it was recorded with violinist Jesse Zubot and percussionist Jean Martin, and the music swerves from noodly jazz sketches to abstract noise, lush classical orchestration to droning post-rock. ‘Ajaa’ is a flesh-and-blood musique concrète collage that splices the gurgles and coos of Tagaq’s young daughter, Inuuja, with the howling of an Arctic blizzard and the voice of traditional Inuk singer Ruben Komangapik. It’s a heavy album and there is little relief from the darkness; the exorcism-like ’Summoning’ collides with a cautionary tale about global warming on ‘Cold Wind’: “Human civilization as we know it will no longer exist… because Gaia likes it cold.”

“Hillary is not going to be an environmental ally, that’s for sure. She’s a warmonger”

The album’s title track contrasts the elasticity of her voice against a cacophony of noisy screams, a feminist gesture developed in its accompanying video as a “warding off of the kind of evil energy that travels in the same stream of consciousness as taking a woman without consent,” she explains. But it’s also a lament on environmental destruction, with a harrowing spoken word soliloquy exploring the album’s titular theme, spitting: “Our mother grows angry / Retribution will be swift / We squander her soil and suck out her sweet, black blood to burn it.” “We need to start realising that what we’re doing as a human species isn’t sustainable,” she adds.

The red-raw nasal hit of ‘Nacreous’, a song about the polar clouds which contribute to the hole in the ozone layer, furthers the album’s environmental call-to-arms, while ‘Sulphur’ – a reference to the byproduct of the bitumen being extracted from Canada’s tar sands – is another testament to the destruction of her homeland. The record ends with a folk cover of Nirvana’s ‘Rape Me’, where Kurt Cobain’s lyrics (“I’m not the only one”) take on another meaning as Tagaq acknowledges the many Indigenous women who have suffered sexual abuse.

Along with the likes Buffy Sainte-Marie, A Tribe Called Red and Digging Roots, Tagaq is part of a determined faction of musicians using their work to fight for Indigenous rights at a moment when these issues are finally in the spotlight. But Canada’s new spirit of reconciliation has not been fully realised; as well as writing new legislation, there are other practical things that could be done to honour the dead. Tagaq recalls a recent trip to the Holocaust memorial in Berlin, a physical monument that ensures genocide can never be forgotten. “It was so touching to see that Germany had built this beautiful memorial. What I would love to see happen is for Canada become so advanced, or become more advanced, and have these giant monuments to its Indigenous population.”

While Canada seems to be making tiny steps towards reconciliation, over the border a different kind of politics has been brewing. The rise of Trump is “fucking terrifying,” she says. “What is happening over there is an attestation to how democracy is failing.” That doesn’t mean her vote would go to Hillary, if she had the opportunity. “She’s not going to be an environmental ally, that’s for sure. And she’s a warmonger, which freaks me out. But I can’t say I would vote for Trump – it’s like being stuck in between a rock and a hard place. I’m afraid of Hillary because of war, but I’m more afraid of Donald Trump simply because he’s a dunce.

“What can I say though? It’s not my country – I shouldn’t be bad-mouthing them,” she adds. “I love America! Every time I go there I always meet the best people. It’s just the election itself is so farcical – it’s ridiculous but so real.”

Retribution is out now through Six Shooter Records