FACT Rated is our new series digging into the sounds and stories of the most vital breaking artists. Next we meet Kay Logan, who splits her time between playing hardcore punk as bassist of Glasgow band Anxiety and perfecting her grizzled, lo-fi bedroom electronics under her solo alias Helena Celle. She tells April Clare Welsh how Throbbing Gristle changed her life.

IN SHORT
Name: Helena Celle
From: Airdrie, Scotland
Must-hear: If I Can’t Handle Me At My Best, You Don’t Deserve You At Your Worst EP (Night School, 2016)
For fans of: Karen Gwyer, Peder Mannerfelt, Opal Tapes

Kay Logan rarely goes to clubs. The fact that she’s made one of the best electronic records of the year, released under her alias Helena Celle, doesn’t make her feel any less detached from dance culture. “I don’t feel like I can ever really belong in clubs,” she says. Instead, it’s among the “weirdos” of Glasgow’s fertile punk scene that she feels most at home, she says, having joined hardcore band Anxiety last summer. “They gave me employment, encouraged me, and most importantly accepted me.” They also put a roof over her head when she arrived in the city from the Scottish town of Airdrie around three years ago.

“Music certainly served as a guiding light for me when I was in the kind of difficult situations that those who experience LGBT youth homelessness can end up in,” says Logan, whose own gender identity and personal politics often play out in through her music. “These things are going to come across in music or performance regardless of whether or not I choose to address them overtly,” she continues, “particularly when I first started performing as a visibly trans person. I had never performed in any other context – I had never performed at all, so I didn’t know what it was like to be perceived any other way.”

Anyone who’s seen Logan shredding bass with Anxiety will know see she’s got punk blood running through her veins. The Glasgow unit are one of the most distinctive hardcore bands to emerge from the UK’s often homogenous and heteronormative scene in recent years, a charisma-radiating, tempo-shifting whirlwind of hooks and distortion. But for now, Logan’s alter ego is providing her with a fresh creative outlet. The raw guitar power of Anxiety may be far removed from Helena Celle’s sun-scorched MC-303 Groovebox iterations, but both projects are linked by Logan’s hard-wired DIY ethos; as a high school student she was already sticking tape loops together with nail polish. “I would play into the loops with a keyboard that I got for my sixteenth birthday,” she recalls. “[It] was probably my first clear exposure to the sort of musical process that I still use today.” 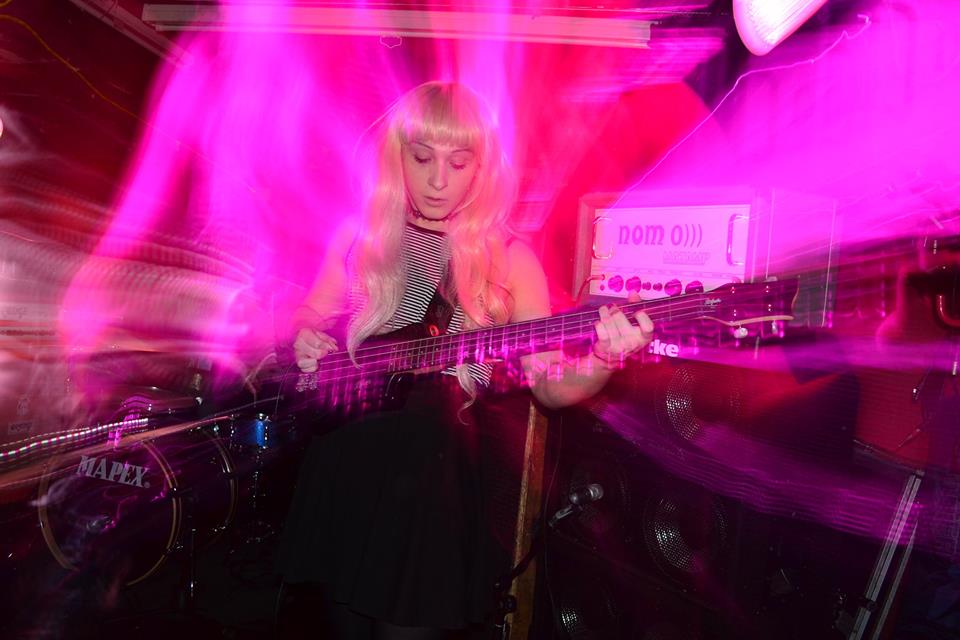 Her latest Helena Celle release is If I Can’t Handle Me At My Best, Then You Don’t Deserve You At Your Worst, titled in a self-deprecating reference to the famous quote (usually misattributed to Marilyn Monroe; it seems no one knows where it really came from). The album’s crunchy analog electronics and spooling synth lines were recorded on a cassette dictaphone, while a guitar amplifier was used for monitoring the output of the MC303. With no overdubs, the tape is faithful to an aleatoric approach that introduces chance elements to her composition.

“Every track is a capture of what was occurring in the room at the time,” she says, citing The Open Work by Umberto Eco and composer Cornelius Cardew as touchstones for this approach, with Eco championing the concept of “openness” within an artistic context and Cardew emphasising the importance of socially accessible music. Meanwhile the titles of ‘Streaming for Biometrics’ and ‘VR Addiction’ poke fun at the digital age from an analog perspective, feeling both futuristic and retro. The tape sold out on UK online music store Bleep in just a day.

Raised on the heavy metal and prog of Black Sabbath and King Crimson, it was the discovery of Throbbing Gristle in her early teens that inspired Logan to start making her own music. “I realised that people who didn’t have the technical ability or education to learn instruments could just play them anyway,” she says. “I cannot conceive of what my life would currently be like if it weren’t for that knowledge.” That autodidactic ethos continues to be a fuel for the artist, who is working on her next Helena Celle record with a new piece of hardware she’s been building. “It’s coded in C++ and runs on a Linux microcontroller, using wavetable synthesis,” she says of the unit, which you can hear in action on her SoundCloud.

For Logan, music is a medium that allows marginalised people to carve out a space and contest power relations, irrespective of social constructs. She hopes that her work can show those who’ve had similar experiences that “not only are their lives worth living, worth fighting for, but [so are] the lives and rights of those who will come after them”.

“Suicide rates of trans youth are abnormally high for a reason, and I’ve been there, and I understand exactly why they are so high,” she says. “If my work allows me to have a platform in which I can speak out for marginalised people so that people will see me saying, ‘These are things that still happen every day,’ then that gives me reason to believe that it was worth creating whatever I did, to have that opportunity to speak out.”

If I Can’t Handle Me At My Best, Then You Don’t Deserve You At Your Worst is out now on Night School