This week we stand, kneel or moon for the first new music from At The Drive-In since the millennium. Member them?!

Plus: Lloyd is back in the game with Lil Wayne, The-Dream’s been recording in a U-bend, Fetty Wap taps Nicki Minaj for a trop-pop jam and The Jesus and Mary Chain bring the rock ‘n’ rooh-ooll.

At The Drive-In – ‘Governed By Contagions’

Daniel Montesinos-Donaghy: First off, I played an acoustic version of ‘One Armed Scissor’ at an open mic once and lost my way halfway through the song so there will always be a pang of trauma regarding At the Drive-In. Secondly, this is pretty damn good! I noticed that social media seemed heavily disappointed about the jam, but as far as comeback singles go this is incredibly strong. Musically, the guitars are attacking in swipes of bended noise, while Cedric Bixler-Zavala remains a jargon tannoy, meaning that the band sound as furious and confusing as ever. (8)

Chris Kelly: Of all the reunions and comebacks of the past few years, At The Drive-In’s might be the only one I’m actually looking forward to. ATDI broke up seemingly at the height of their powers, and neither the much-loved Mars Volta or less-loved Sparta spin-off projects could capture their ragged energy and ferocity. ‘Governed By Contagions’ captures both, with its guillotines, cyanide teeth and “cannibal hymns of the bourgeois.” (8)

Tayyab Amin: Bearing in mind I first heard of ATDI through the Coachella 2012 poster [!!! – Rapidly Aging Ed.], I don’t really have a measure for the group. What I can do, however, is consider whether I’d be into this tune if it was on the Tony Hawk’s Pro Skater 2 soundtrack. “Brace yourself my darling, brace yourself my love” is without a doubt the last thing I’d hear before bailing a wallride on School II, landing on my face in all of my invincible, deformed grotesqueness. The way it swerves from cool to corny in one fell swoop, and occasionally back again… hey, life comes at you fast. As does the ground. (5)

April Clare Welsh: Do you think somebody needs to tell them we’ve all moved on? My At The Drive-In hoodie is languishing in my parents’ loft next to a signed Slipknot CD and a bag of broken dreams, and this year we’ve already seen Rage Against The Machine attempt to mobilise the yoof and fail. But the thing is, ‘Governed by Contagions’ is actually really fucking great. Spitting and writhing like a fever-ridden toddler, after 16 years it seems like nothing can keep ATDI down. I would recommend knocking back this dose of ye olde teenage angst before slamming the lid shut on one of the shittest years in history – and this song is both *topical* and *pleasantly nostalgic*. OK, so it’s not ‘Arcarsenal’, but welcome back anyway lads. (8)

Jibril Yassin: Their first new song in 16 years and you’d think they’d have a hook stronger than, “That’s the way the guillotine claps.” It’s such a 12th grade clunker! But thinking to Omar and Cedric’s recent output with both Antemasque and The Mars Volta and knowing how Refused’s similar comeback album from last year fared, suddenly I’m thankful for the song’s off-the-cuff feel. It’s knotty, yes, but it restores some of their righteous fury rather than merely recalling it. This could have been much worse. (6)

Tayyab Amin: The melodramatic vocals and drum reverberations at the start had me fearing for the soppiest, most flaccid strain of romantic balladry. I shouldn’t have doubted Lloyd for a second. He brings it back to his streets with a cruiser of a tune about being smitten and strapped at the same damn time. Lil Wayne goes for three points on the buzzer for end-of-year lists with the sensational and true to himself lyric: “That Bonnie, that Clyde, that Velma and Lil’ Weezy / She say I’m like that pistol, you gon’ need me, feed me, squeeze me.” (7)

Jibril Yassin: It’s fantastic to see Lloyd back – showing no signs of being out of step, coo as audacious as ever – but the further we can keep Weezy away from AutoTune and awful metaphors, the better.  (7)

Chris Kelly: The high point of Lloyd’s year was probably his appearance in the charity basketball game in the ‘Black Bieber’ episode of Atlanta, but this is a close second. His high tenor is a pleasantly piercing contrast to a rash of rappers-turned-singers with barely-there registers, and he’s at his best when in tandem with someone like Lil Wayne. And while it’s not as club-ready as ‘You’ or ‘BedRock’, it’s a little more propulsive than the straight-ahead R&B of this summer’s ‘Tru’. Welcome back, Lloyd. (7)

Daniel Montesinos-Donaghy: First off: new Lloyd! It’s been far too long without hearing his silken tones, and felt even longer seeing as his last real dispatch was the ehhh Playboy Diaries Part 1 mixtape. ‘Holding’ is a strong look for him: a guitar-led beat a la the gorgeous ‘Tru’, sleek double-entendres and the calm boost of his old collaborator Lil Wayne, who’s made so much music with the man in the past. The best thing I can say about a pretty dismal 2016 is that at least Young Goldie came through to bless us with his high-ass vocals. Bless him! (8)

April Clare Welsh: Any night of the week at the Shacklewell Arms in Dalston you’ll find a young band of boys with back-combed hair, a Shin-Ei Fuzz Wah pedal and some funny-shaped guitars playing songs so heavily influenced by the Jesus and Mary Chain it sounds like they could be the only thing they’ve ever listened to. The band’s influence is unrivalled and Darklands is one of the finest indie albums ever made, IMHO, but if the magic (read: hatred) has gone, it’s gone. You can’t get it back, even with lyrics like: “Fucked up girls like drugged up guys / That won’t keep him warm at night / It’s just like a grape in a bottle / It’s wine today but piss tomorrow / I don’t know, I guess that we’re all through.” (5)

Daniel Montesinos-Donaghy: Your mileage may vary but points are immediately deducted for (a) saying “rock ‘n’ roll” multiple times and not being a thrash metal band, aka the only time it’s acceptable, and (b) being this influential yet thinking sounding like interstitial music on Trigger Happy TV is a fine way to continue your legacy. (4)

Chris Kelly: As for reunions that I’m not particularly into, look no further than the JAMC. This raises more questions than answers, like, “do 50-year-old rockers still have something to say?” and, “why does this sound like a Dandy Warhols B-side?” (4)

Tayyab Amin: The Jesus and Mary Chain were one of the most in-demand acts in the Bestival forums for the longest time. Listening to them for the first time, I now know why. No shade. Well, maybe a sliver of shade. What’s really cool about this tune though is how it never lets itself peter out until the very final moment. It’s all build up and freewheeling fuzz and psych, then it’s over and time’s flown by so fast it must have been at least a little fun, right? (5) 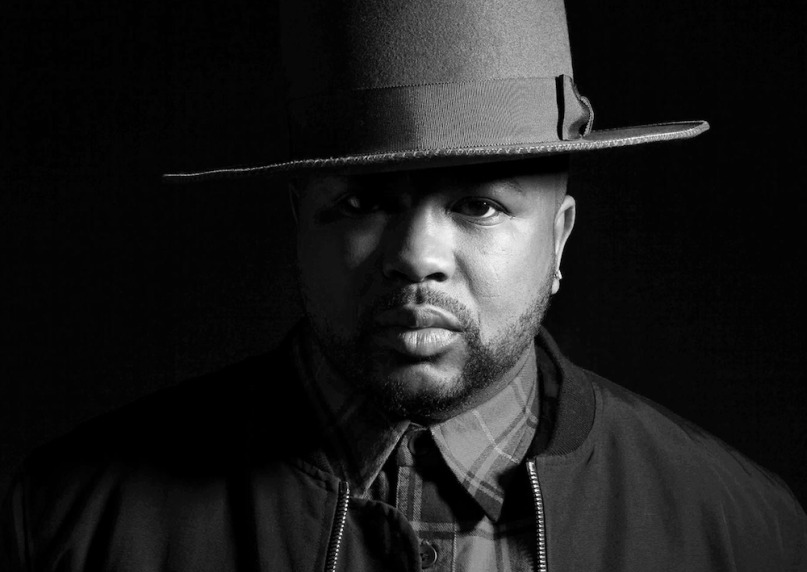 Chris Kelly: Since the uneven IV Play, The-Dream has opted for EPs (and a visual album) that pop up out of nowhere and then leave the public consciousness just as quickly. Hopefully Love You To Death won’t suffer the same fate, because all five tracks are like ‘Ferris Wheel’: slo-mo rides in Frank Ocean’s Ferrari but with Mr. Nash behind the wheel. (7)

Jibril Yassin: There’s enough wobbly space in the production to get lost in, and enough for The-Dream to go forth and multiply. His lyrics hitting the sweet spot between embracing that longing feeling and questioning it. (8)

Daniel Montesinos-Donaghy: Let us accept that since Love King, Terius Nash’s solo output has been spotty, with the failures nearly on par with his moments of continued genius. January’s Genesis was a dud, and the ‘accidentally’ leaked Crown Jewel was shelved for a reason – expectations remain high for this man, because you never know when he might get re-engaged and drop something on the level of ‘That’s My Shit’. ‘Ferris Wheel’ is an interesting track, as it finds Nash digitally modulating his song as if to give a funhouse effect, matching the bright slow-motion beat. The music blinks and pings casually, as if the world is getting quieter, and Nash pontificates over a dreamy romance: “Isn’t this how love feels?” He’s talked a great deal about love, but he rarely has ever brought out the woozy joy in the emotion. Never count out Terius Nash, he may surprise you. (7)

Tayyab Amin: Why does this track sound like Michael Jackson trying to sound like a pre-‘Can’t Feel My Face’ Weeknd? ‘Ferris Wheel’ sounds like it was recorded in a U-bend, but still feels fresh in a Domestos sort of way. (5)

Chris Kelly: Will Fetty ever match the magic of ‘Trap Queen’ or ‘My Way’? Probably not, but there’s definitely a seat for him at the table with songs like this… just better executed. The tropical vibez are fun but this is kind of a mess: he gets one of Nicki’s less-inspired verses and trumpet leftovers from every pop-rap song of two years ago. Better luck next time. (5)

Jibril Yassin: Tropical pop just couldn’t go quietly into the sunset of 2016, hey? Between the raucous horns and Nicki’s star-stealing verse, Fetty Wap sounds befuddled. Even though his sense of melody is keeping this afloat, you can’t help but want more. (6)

Daniel Montesinos-Donaghy: There’s something truly lovely about Nicki’s continued dedication to announcing her allegiance to Young Money, especially with Wayne in limbo, Drake being his own universe and Tyga – well, he’s Tyga so never mind, really. She has a strong turn here in the middle of Fetty Wap’s codeine Louis Armstrong vocals, and immediately helps the song feel more expensive than the Boohoo.com background music it really is. Not my favourite Fetty Wap moment of this week, though: ‘Like A Star’ is made insignificant by Fetty’s name being uttered once in Jim Jarmusch’s Paterson. Paterson: (9). Fetty’n’Nicki: (5)

Tayyab Amin: If this doesn’t come tooled with a sans-sax mix I’mma be mad. Fetty Wap does it for all the fans who never know the lyrics and opt for enunciating unintelligible gibberish in the right melody. And as far as lazy guest spots go, I’m oddly intrigued by Nicki’s “Tell your hoes go and drain my spaghetti.” Y’know, I… kinda relate? (6)