Pauline Anna Strom dreams in color: The legendary loner synthesist on a life of innovation

Earlier this month, RVNG Intl. celebrated the otherworldly ’80s synth constructions of self-described “loner and heretic” Pauline Anna Strom by re-releasing music from her debut Trans-Millenia Consort and other parts of her catalog. Lewis Gordon looks back at these incredible New Age innovations in a conversation with Strom, who opens up just enough to give even more new life to her work.

“I look at myself as a kind of mystery woman,” Pauline Anna Strom says over the phone from her San Francisco home. “And that’s the way I like it to be.” Over the course of our conversation, Strom, who has been blind from birth, keeps unwaveringly to her word, divulging only snippets of her private life that she feels relate to her music. She’s worked hard to cultivate this sense of unknowing, deliberately shying away from the more intrusive aspects of modern life: “I’m not a computer person. Nuh-uh. Not with all the hacking, not with the invasion of privacy. No. I’m sorry, I don’t live like that.” It’s remarkable, then, that Matt Werth, head of Brooklyn based label, RVNG Intl., has managed to coax Strom into making her work widely available – including digitally – for the first time, compiling works from across the seven albums she released from 1982 to 1988 into the upcoming Trans Millenia Music. With modern listeners’ ears increasingly piqued by what falls under the broad banners of New Age and ambient, the time might be right for her music to break out of the San Francisco Bay Area in which it was conceived. Listening to Strom’s gossamer synthesized soundscapes now, the heaviness of the world is suddenly lifted, if only for a moment.

Strom moved to San Francisco with her husband, a soldier, at the tail end of the Vietnam War. She had one foot in her role as a military wife and the other in the counterculture of the city. She says she didn’t often mingle with people because of her blindness and her role as a housewife and frequently describes herself as a “loner.” Her solitude is a distinct inverse to the city’s collaborative musical histories, like the San Francisco Tape Music Center. Around that time, a New Age music gold rush made its way to San Francisco. While artists, label execs and promoters headed out west to find success in the genre, Strom furrowed her own singular path. Her husband bought an organ and, as she began to take music more seriously, she acquired a mélange of equipment including a DX7, Prophet 10 and E-mu Emulator, among others; she’d feed all this through a substantial amalgamation of effects hardware. The sheer range of equipment allowed her flexibility in composition. “I looked at the setup as one big synthesizer,” Strom says. “I used equipment and electronics to create intervals, to create spaces, to create all kinds of things, not just the musical notes.”

“I look at myself as a kind of mystery woman.”

Despite grappling with her own blindness, Strom says she would translate visual ideas into audio using her vast set up. “I like to create what’s in my head and interpret that into sound. Something like drops of water in a cave, I don’t want to sample the water; I want to create the water through algorithms of the DX that modulates all that stuff,” she says. “The waveform creates the water and then I just randomly play my fingers on the keyboard. When I do that, I can feel the texture of the water. It may sound strange but I can.” This approach extends across her seven albums. On her 1982 debut, Trans Millenia Consort, she inhabited the role of a transcendental guide, carrying listeners through a deep primordial past and ecstatic future. It’s her most recognizably New Age record. 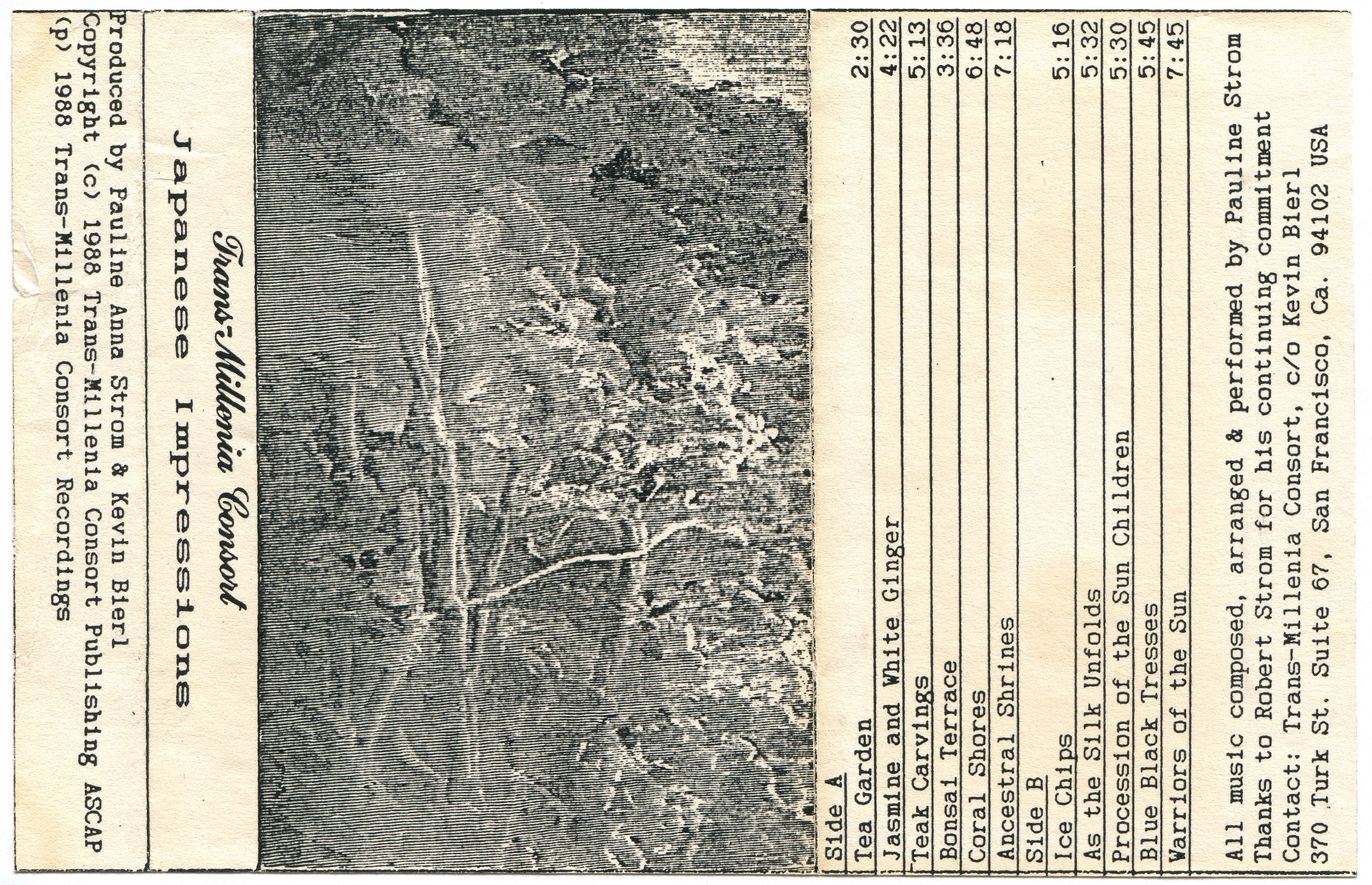 By 1984, Strom had turned her mind’s eye to vampiric horror and the subterranean with Spectre, an album more in tune with the oppressive darkness of early Tangerine Dream and Cluster. Then, on 1988’s The Moorish Project and Japanese Impressions, she explored her perceptions of North Africa and east Asia. Each album captures Strom’s evocative, arresting conceptions of how the world looks and sounds. They’re performed with a lightness of touch lacking from greater feted albums of the era such as Suzanne Ciani’s Seven Waves. “When I see things in my head and when I dream, I dream in color,” she says. “I’ve always seen things in my mind. I don’t know how else to interpret it.” She often recorded at night preferring to work when the “energy is slowed down”, sitting in her nightgown with a coffee in hand.

This range in output was partly borne from her eclectic reading habit – Strom didn’t learn braille, instead consuming books through listening – as well her belief a mystical human power to accumulate knowledge. “I believe in reincarnation in a different sort of way to other people,” she says. “I believe it is bringing in knowledge and previous life experience… I believe our souls and minds go on and our bodies, the machine, dies. But we tend to pull in knowledge from time immemorial and I think that’s how it all germinates.” Drawing on such a deep bank of previous lived experiences, Strom maintains, has enabled her to create those vivid sonic landscapes, her blindness aiding her construction of these intricate sound worlds.

“People are just as prejudiced against a disability as they are against a race.”

There’s also a darker side to Strom’s visual impairment, one that has shaped her development as a composer as opposed to a performer. She’s cagey about the possibility of playing live: “People are just as prejudiced against a disability as they are against a race. I’ve dealt with a lot of that, ever since I was in school. If I had to stand up to say something in a class, I would cry and be laughed at because they they were making fun of me. I don’t like the blind stereotype where people say, ‘Oh poor, Paula’. Fuck that. I’ve dealt with that stuff and it’s one reason I’ve become a loner in a lot of ways. I’ve gone to great lengths to avoid those kind of things. It never goes away.”

It may also be way she is vague about her participation in the New Age scene. Some alternative radio stations and Terry Riley figured into her listening habits, but she was more enamored by the work of the Kosmische synth pioneers working in and around Germany at the time, like Klaus Schulze, Tangerine Dream, Harmonia and Brian Eno. For the most part, she worked alone in her house, detached from the machinations of the local scene. She has warm words for artists like Lemon DeGeorge and Peter Buffet, who acted as the respective producer and engineer on Trans Millenia Consort, but is still fiercely critical of what she saw happening in the Bay Area around that time. “I found such hypocrisy and phony characteristics [in the music scene],” she says. It was just sickening.”

These days, Strom works alone as a distance healer and tends to her pet cyclura, a rock iguana, she’s called Little Solstice. She’s no longer making music — she had to sell her equipment due to “serious personal reasons”. When I ask her how this feels, she’s audibly upset, telling me it’s “painful”, her voice cracking in the process. The ideas, though, are still there, constantly bubbling away. She is hopeful that soon she’ll be able to get hold of a single digital unit capable of providing as many possibilities as her previous analogue setup.

While technology might have moved on, Strom is less sure about other aspects of the world. She’s highly skeptical of all politics, regardless of alignment. But where Strom’s work in the ‘80s might have felt part of a sea change in modes of thinking, now it feels more modestly defiant, despite Strom’s optimism about its capacity for change. “I hope it gives listeners some insight and further expands their consciousness in a way.” Her music might be beguiling and disarming in its beauty to modern listeners, but for Strom it’s the most natural thing in the world, a self-made home away from home in some ways. “It feels right,” she tells me, pausing for a moment. “It feels clean.”

Lewis Gordon is a FACT contributor. Find him on Twitter.

Read next: Yamaneko’s Spa Commissions and JV Lightbody’s Inner Work challenge everything we know about ambient and New Age