Singles Club I by Al Horner, Chal Ravens and Claire Lobenfeld I 06.03.18

This week, DJ Khaled brings a triple-hit of star power to his new track ‘Top Off’, which features Jay-Z, Future and Beyoncé, while Diplo teams up with Lil Yachty and Santigold for ‘Worry No More’.

Elsewhere, Iranian-Dutch force of nature Sevdaliza is back with a lunar phenomenon-inspired new single, electroclash veterans Ladytron leap back onto the scene with ‘Animals’ and there’s a new Run The Jewels remix of Lorde’s Melodrama banger ‘Supercut’. Dive in below.

Chal Ravens: A pretty dull beat with a pretty phoned-in Future hook and a totally fine Jay Z verse – so far, so expensive. But when Bey’s voice finally cuts in, I still get that little involuntary shiver from hearing a voice that’s so damn good, and so often unpredictable. So really I’m interested in hearing what she’ll do over any track at all, because her voice continues to evolve year on year as she tries on new vocal styles and new personas. This therefore feels more like a page from her exercise book than the clash-of-the-titans enormo-hit it was perhaps meant as. There’s just no chemistry between the guests at all. (4)

Al Horner: I’m convinced 99% of Khaled’s songwriting process these days is combing through his iPhone contacts list and deciding which mega stars to connect. Which is all very well when the beat has any kind of spark to it, or when the stars enlisted are on the kinds of winning streaks where they could belch last month’s utility bill into a mic and still somehow conjure a hit. ‘Top Off’ struggles with the former box, and waits late in the game to tick the latter: Bey’s 45 seconds here see her slalom through a series of sung-rapped rhymes about courtside seats, NDAs and the need to free Meek Mill, to exhilarating effect. Her spot rescues a flat, oversized production (another one!) from a man who is more meme than musician in any serious sense in the year 2018, let’s be real, guys. (4)

Claire Lobenfeld: Before I heard this song, I was sure I knew exactly what it sounded like – glitzy, overdone beat (check), repetitive swag rap hook (check), maybe some lame brags from Jay-Z despite the vitality he displays on 4:44 (check) – and I heard that Beyoncé had a not-so-sneak diss about making Tiffany Haddish sign an NDA if they hang out again. All of these things happened, but I was not prepared for Bey’s “top off the coupe and it look like Freaknik / In the hood, hollerin’, ‘Free Meek’,” which made made it all worth it. (6)

Al Horner: I really like this, but not nearly as much as I’d like a full sitcom where Santigold and Yachty run a bakery for real. Can we make this happen? Anyone? James Van Der Beek, you out there, bro? Good to see Diplo switching up the template: the guitars and steely beats join the dots between The xx and ‘The Morning’-era Weeknd, with a sense of fun that’s more more-ish than all those donuts in the video. “You keep the fame, keep the phony canned applause,” sings Santigold. “I’ll keep on dreaming and keep on rising high above.” Do that thing, Santi. (8)

Chal Ravens: Well, it looks like I’ve enjoyed everything Diplo’s done for a little while now and ‘Worry No More’ is no exception. Not sure what this means for me and Dippy, whom I previously regarded as a kind of “frenemy with occasional taxi-playlist benefits”, but this is a great pairing of personalities – you’ve got Yachty, the little kid who refuses to grow up and just wants to live in a “nice house on the shore”, and Santigold, endlessly charismatic and weirdly ageless, bringing the catchy quotables. It’s all believable. They just love to make cakes! And they don’t wanna worry about stuff! They like to play with frosting and wear hats with their names on! The video is great, the song is great, can’t argue with any of it. (7)

Claire Lobenfeld: I didn’t like pop-punk then, I don’t want it now. Two points for getting Santi a check, tho. (2)

Claire Lobenfeld: I’m not sure people are truly ready for what Sevdaliza has to offer, but I’m so happy to bear witness to it. (7)

Chal Ravens: Wow. This is on some ‘Nothing Compares 2 U’ shit, like a single tear running down a cheek in extreme close-up for six heart-stopping minutes shit. I bloody love Auto-Tune when it’s used as creatively as this (see also, ‘Lucky’ by Charli XCX; ‘Tears’ by Charli XCX and Caroline Polachek – yes, I believe Charli is the boss of this look) and Sevdaliza uses it to build an opaque emotional intensity that’s perfectly at odds with the surely-now-dismissed idea that Auto-Tune means “fake” or “robotic”. Those modal scales sound especially haunting transformed into computerised melisma (nodding to her Persian heritage also) but the production places it in a lineage of soul-baring, quiet storm R&B, like Sade at her most raw and exposed. Ughhhhhh this is so good. (9)

Al Horner: NO, SHUT UP, *YOU’RE* CRYING! Chal is dead-on with the Sade comparison: this shares the same softness and soul, but is filmic and powerful in its own way, full of autotuned vocals that break from human form into a high, otherworldly shriek from some kind of other realm (anyone else get Deftones ‘Knife Party’ vibes?). Sevdaliza keeps getting better and better, and as Claire suggests, it’s an evolution that’s a joy to behold. (8)

Claire Lobenfeld: You know when you feel like you have to sneeze and your body gets all tense, your face gets screwed up, and then nothing fucking happens? That’s what this track reminds me of – lots of build up for a big explosive pay-off that ultimately trails off to nowhere. (5.5)

Chal Ravens: What a combo! I’m very keen for this new Koze record, and Roisin seems like the perfect choice of collaborator – sure, she brings a bit of shiny-haired glamour and finesse, but that’s ten-a-penny. What you get with Roisin is a max-strength dose of disco experimentalism, which obv works perfectly with Koze’s reputation as the oddball A-lister of dance music. In the end, the track is surprisingly straightforward – a silky bassline grooving over a stuttering rhythm, vocals upfront, a hint of a disco ball flickering in the corner. But it works. I’m down. (7)

Al Horner: Koze’s new album’s shaping up to be one of the year’s finest, isn’t it? This gives me all kinds of twitchy energy, like I might sack off work for the afternoon and go to a roller-disco or something. Roisin is the perfect accomplice on ‘Illumination’, which on top of its nervous rhythms and experimentalism, boasts a soothing quality too. Which will come in handy when I, the World’s Clumsiest Person, inevitably fuck myself up at said roller-disco. (7)

Chal Ravens: In principle this is a great thing – a brilliant band, a long hiatus broken, a typically astute fusion of Roxy Music’s seedy glamour and Kraftwerk’s endless momentum – but it’s not quite gelling. Everything feels slightly lumpen, slightly bloated – too many layers of chunky bass, not enough air between the gaps. Still Ladytron though. (5)

Claire Lobenfeld: I have no nostalgia for electroclash that wasn’t at least moderately satisfied by Shamir’s Ratchet and what this is, I don’t need it, either. (3)

Al Horner: I admire Ladytron, but this is veeeery sluggish. There goes that twitchy energy out the window. (3) 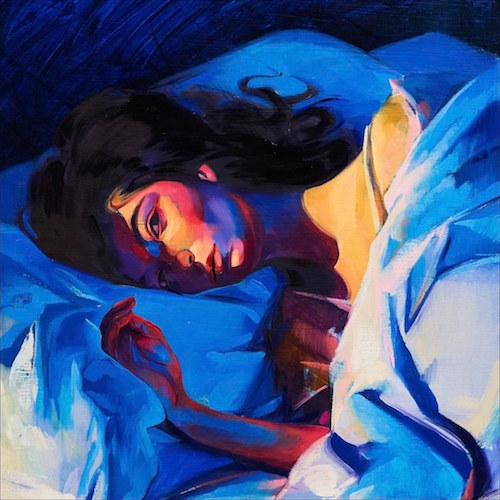 Claire Lobenfeld: Can I be honest? Thinking about Lorde’s penchant for booking unexpected openers just made me want to listen to Majical Cloudz. The way this ‘Supercut’ remix sounds is not very surprising, but I will never forget how much hearing ‘Childhood’s End’ for the first time took my breath away. Listening to Majical Cloudz gets a 10. This gets whatever. (5)

Chal Ravens: I watched El-P’s RBMA lecture recently, which he gave just before the first Run The Jewels mixtape dropped, and he was already a bit of an underground ledge, of course, but yet to make the surprise transition to festival headliner status – which always felt deserved with Killer Mike in tow, two rap lifers getting offered their biggest gigs in their 40s. So I’m glad they’re taking that and running with it by, for instance, collaborating with Lorde, who is half their age but at least as smart and somehow knows exactly what to do with this awkward industrial-with-a-hint-of-Kid A beat. But she’s also half their age, and her references will certainly be different. The overall effect is very ‘90s indeed, and I’m just going to say this: Skunk Anansie. (6)

Al Horner: There’s a lot to love about RTJ touring with Lorde and Mitski later this year: the fact it places El-P and Killer Mike on arena stages night after night; the way it sums up the genrelessness with which young music fans today consume music; the thought of all those parents accompanying their Lorde-obsessed kids to shows who’ll have to explain what “teabag a piranha tank” means. Yep, it’s going to be something special, alright. This coming-together is the icing on the cake: a fizzing rework that bends Lorde’s charm to El-P’s production darkness. Not quite super, but not far off. (7)