Berlin’s Superbooth show has become an annual pilgrimage for modular synth fans across the world. FACT’s tech editor Scott Wilson went to see what we can expect from the format in 2019 and beyond.

Trade shows are as much a part of synthesizer culture as patch cables and soldering irons. Over the past three decades, California’s NAMM event has been the place for manufacturers to showcase new synths and technological innovations (it’s where MIDI was publicly unveiled in 1983), but over the past few years its dominance for synth announcements has been challenged by Berlin’s Superbooth, an upstart expo run by the minds behind the city’s famed SchneidersLaden store.

What began as an event for boutique companies making Eurorack modular gear has become a place where big brands like Arturia, Native Instruments and Ableton can launch their latest products; at this year’s edition, held last week, Korg showcased its latest affordable Volca box, Novation launched a new flagship polysynth, Summit, and Elektron dropped Digitone Keys. Modular synths still dominate Superbooth at the stands and on stage (Caterina Barbieri and Mute’s Daniel Miller both played sets), but they co-exist with traditional keyboard instruments and software too.

Superbooth has always been a place where you can expect to get a glimpse of where music technology is heading over the next year, and this year was no different. It’s always difficult to identify a dominant trend at a show this wide-ranging, but the stuff that excited me this year offered new ways to use the modular synth in different contexts – not just in the studio and performing live, but in DJ sets as well.

ALM Busy Circuits is one of Eurorack’s true innovators. Its founder, Matthew Allum, has made modules from old Yamaha FM sound chips, a filter based on a classic AKAI sampler and a programmable modulation source that’s one of the format’s most in-demand modules. His latest brainwave is Pamela’s Discotheque, an unassuming black and pink box that converts tempo data from the ethernet port of a CDJ into analog clock signals for syncing with modular systems.

Seen at #Superbooth: @busycircuits’ ‘Pamela’s Discotheque’ which hooks up a CDJ to a modular 🤯, and the ‘Squid Salmple’ — a sampler module featuring kits made by @mumdance and Russell Haswell. —— Keep up with more Superbooth action through our Insta Stories 🤳🏽👀

Allum’s solution is simple but brilliant; by analysing the data transmitted through the CDJ’s ethernet cable (used share music files between CDJs and keep them in time), he identified tempo data from Pioneer DJ’s Rekordbox software he could use as a guide. The ethernet cable goes into Pamela’s Discotheque, which does some conversion, and a CV clock signal comes out. You can even do a spinback on the platter and the Eurorack will react accordingly. For a lot of modular users the need for such a converter won’t be immediately obvious, but Allum is good friends with Jack Adams aka Mumdance, who requested Allum develop the tool so he could do more with his modular in his hybrid DJ sets.

ALM also has a great new audio and CV sampler module arriving next month called Squid Salmpler (the misspelling is intentional, Allum tells me, because, ALM + sampler = sALMpler) that pairs perfectly with Pamela’s Discotheque. It has eight trigger inputs so you can use it like a drum machine, and it comes with a USB drive featuring 80 royalty-free sample banks made by friends of ALM including Mumdance, Russell Haswell and Dungeon Acid. It was originally shown at last year’s Superbooth, but Allum says it’s gone through several changes since then. It was probably the most fun module of the show – each time it was shown off it started its own mini-rave.

Polyend is becoming well known for its grid-based controllers, like the gigantic Seq MIDI Step Sequencer and last year’s Dreadbox synth collaboration, Medusa. This year’s key offering from Polyend is a little more compact, but no less ingenious: a Eurorack module called Preset that can be used to create, recall and sequence musical notes, gate and CV automation.

Of the Preset’s nine CV outputs, one is an LFO, so it will store envelopes and perform some modulation. I was shown how the module was able to switch between synthesis models on three Mutable Instruments Plaits modules on the fly, and it was a minor revelation. You’ll have to remember where the nine outputs were patched to or the presets won’t work, but there’s still obvious advantages for live performers. 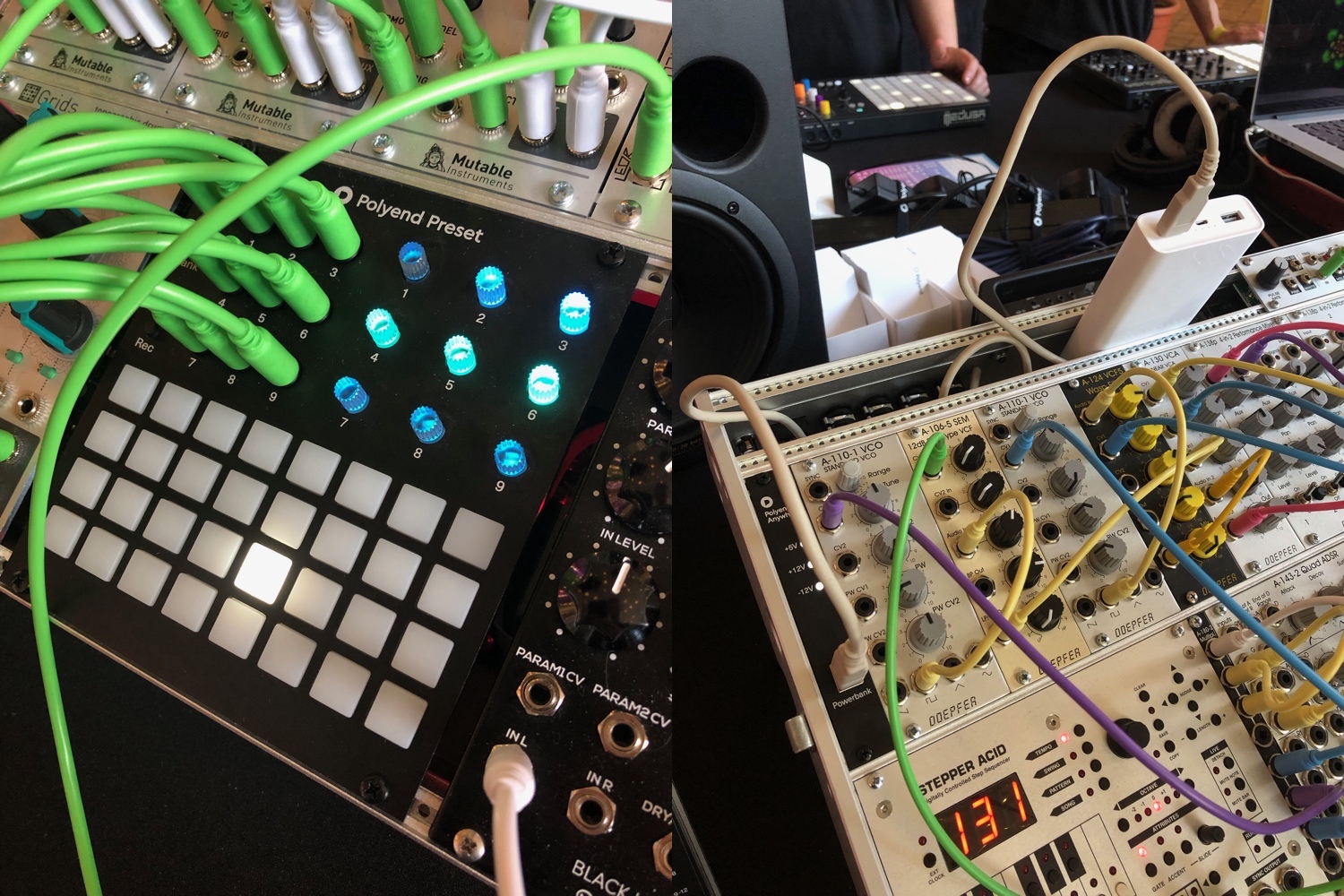 Another new module from Polyend frees the modular in a different way – power. While there are plenty of battery-powered synths on the market, modular rigs typically need mains power. Polyend’s Anywhere allows you to plug in a the sort of high-capacity battery pack you’d use to charge a phone or laptop and have that power the system instead. Though it’s probably most practical for anyone transporting a small skiff, Polyend was using it run a large Intellijel 84HP Performance Case with no noticeable issues.

You can always be guaranteed to see at least one WTF item at a synth show, and at Superbooth 2019 it was Motor Synth. Gamechanger Audio’s latest device does exactly what its name suggests, which is generate sound by harnessing the energy made by eight electromotors. The concept itself is wild enough, but in no way does it prepare you for what this thing actually looks like in action.

The synth’s motors fill a similar role in to oscillators in conventional synths, and are derived from technology typically seen in flying drones. These motors are capable of speeding up and slowing down very quickly, because drones need that kind of ultra-precise control to manoeuvre in the air. It’s the most metal thing I’ve seen since Gamechanger Audio introduced its Plasma Pedal distortion unit last year.

Motor Synth is capable of four-note polyphony, but it didn’t strike me as the kind of instrument you’d use to make serene pads or strings; as you might expect, it sounds a bit like a mechanical device when it’s played. While it would be easy to write off Motor Synth as a bit of a gimmick, it certainly didn’t sound like anything else at Superbooth 2019. Its crowdfunding campaign hits Indiegogo on May 28.

If there was anything at this year’s Superbooth that highlighted how modular synths have been accepted by the wider industry, it was Ableton’s CV Tools, a long overdue package for Live 10.1 that makes controlling the format from within the popular DAW easier than ever. Software such as Bitwig Studio and Expert Sleepers’ Silent Way offered this for years, but Ableton’s user base is quite a bit larger. 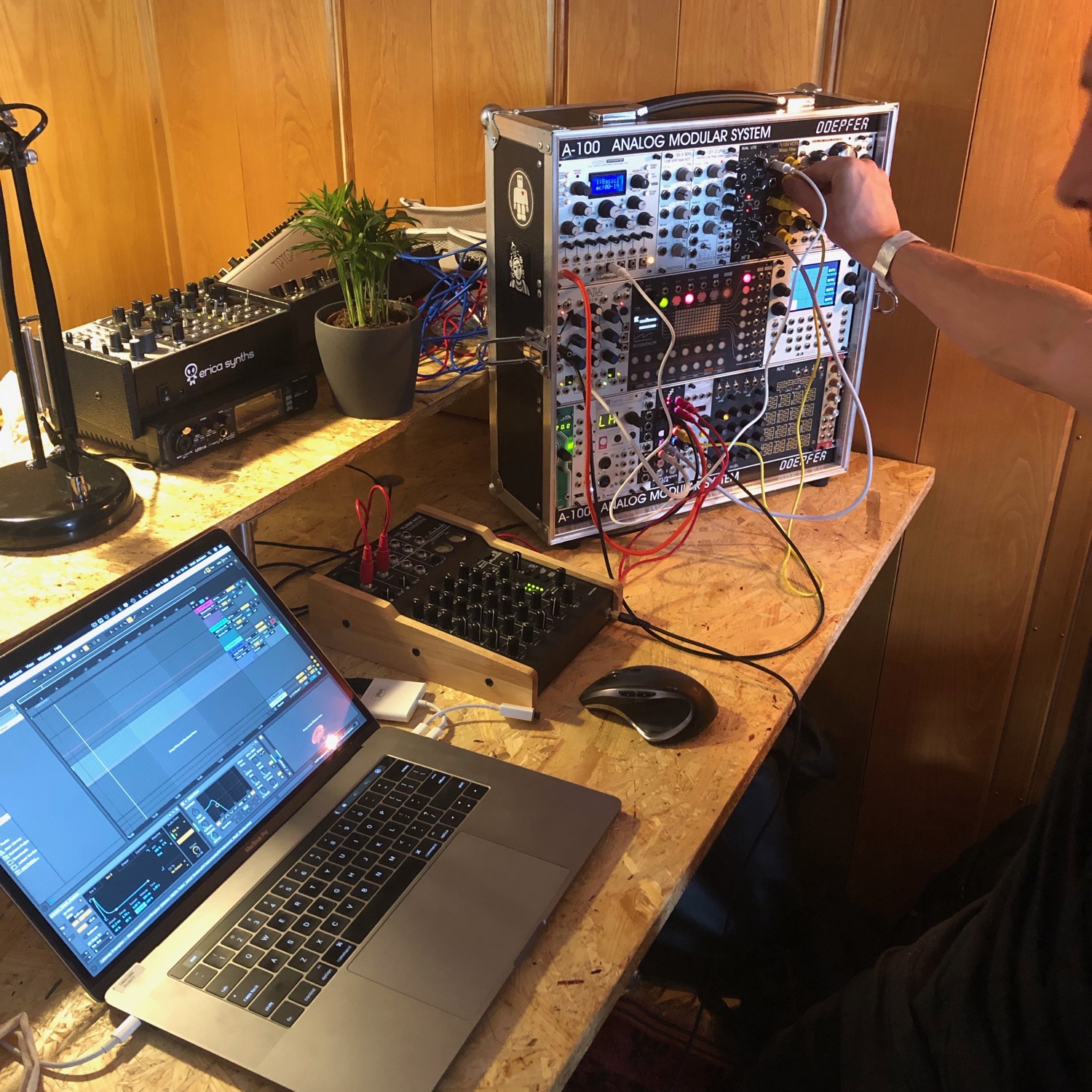 What’s most significant about CV Tools is that it instantly lowers the barriers for entry to Eurorack. Building a modular rig is expensive, but the utilities CV Tools offers (LFO, envelope generator, gate triggers and more) are the essential building blocks of a system that perhaps aren’t that exciting, or that are probably further down the list of priorities than a shiny new oscillator module.

The caveat is that you’ll need a specific type of audio interface to send the CV to the system, namely a DC-coupled device or Expert Sleepers module, though it’s likely buying one of these will save you money overall. I’d expect CV Tools to have a significant impact on the number of Eurorack systems in the wild over the next year.

From the Theremin to the Polivoks, Russia has a long and rich history of synthesizer innovation. Leading the country’s modern synth industry is Vlad Kreimer’s SOMA Laboratory, whose “organismic” LYRA synth has turned heads over the past few years. This year it was showcasing a semi-modular drum machine, Pulsar-23. It’s probably best you just watch Kreimer’s official Superbooth presentation below (skip to 07:45 for the music).

At first glance, it might appear to be in the same large-format drum synth category as Vermona’s DRM1. What I found most striking about the Pulsar-23, though, is how textured it sounds. This clearly isn’t a look backwards, it’s an attempt to carve out a new place in the drum machine category with a huge amount of control and sound design potential, complete with envelope generators that can generate noise and synth sounds too. It’s even capable of “live circuit bending”, and you can patch it into your existing modular gear or integrate it with your DAW. I find it hard to get excited about instruments that look so utilitarian, but seriously, this thing is mind-blowing.

The Pulsar-23 shown was a prototype of the mass production version, which we can expect soon.