Each of the three parts of Ryoji Ikeda’s data-verse trilogy is a dazzlingly complex aesthetic investigation into the science of the natural world.

Ryoji Ikeda has been working with data for close to 16 years, working with creative coding to develop an audiovisual language in order to explore what he terms “an aesthetics of data, information and computer science”. In many ways, the data-verse trilogy is Ikeda’s final word on this facet of his practice, a dazzlingly complex aesthetic investigation into the science of the natural world. The artist’s upcoming show at 180 The Strand will feature the world premiere of the third iteration of a work five years in the making, following data-verse 1, which premiered at the 58th International Art Exhibition, La Biennale de Venezia in 2019, and data-verse 2, unveiled in Tokyo Midtown, also in 2019. The show will mark the first time all three works will be shown simultaneously. “Three screens will be showing at the same time for the first time, and probably for the last time, so this is a really special occasion,” says the artist.

Commissioned by Audemars Piguet Contemporary in 2015, data-verse represents Ikeda’s crowning technical achievement, a dense visualization of tens of thousands of hours of rigorous scientific research and rhizomatic thinking, distilled into an intense burst of transcendent information exchange. “Data visualisation is really difficult,” admits Ikeda. “But the most essential important point is you have to understand the science first.” Working from vast data sets lifted from research conducted by NASA and the Human Genome Project, Ikeda folds DNA sequences, galactic coordinates, the structure of proteins, quantum physics and cosmology into the installations, parsing the raw data with self-written programs to be projected in three monolithic audiovisual presentations. The result is staggering, a perspective-altering reminder of the scale of the universe that verges on the psychedelic.

As Ikeda tells it, his motivation for presenting such highly-detailed works of maddening complexity and precision stems from an earnest desire to learn. “I just wanted to understand what nature is,” he explains, at once modest and omnivorous. This has always been the drive behind his data-oriented work, dating back to formative difficulties with academia. “This 15-year journey was actually to study, from scratch, because I dropped out of school,” he emphasises. “I don’t know anything and I hated learning anything at school, but through the project I kind of understand most of the science, from quantum mechanics and particle physics to cosmology and astrophysics.” By drilling down into the pure mathematics of scientific phenomena, Ikeda is able to approach intensely difficult concepts in an innately accessible way, something that guides both the methodology and execution of his art.

“Data is really a building block of information, like a note or a frequency,” he explains. “A composer composes all these notes and sound into music, so I wanted to try to compose very big, complicated scientific data, which is actually fact, into a single artwork.” Likening it an ensemble orchestra, data-verse is another of his works that Ikeda understands as inherently musical. Yet, unlike the improvisational jazz of point of no return, the three iterations of data-verse represent self-contained parts of a symphonic whole, a meticulously designed composition of architectural structure. “There’s no room for improvisation or jazz so you have to prepare,” he explains, “exactly like an architect.”

This discipline-focused, data-centric approach to work is the ultimate expression of Ryoji Ikeda as artist, musician and autodidact. While the essence of these works lies in their detail, mastery of each pixel and decibel of his work is a responsibility he believes lies with the artist, a role he inhabits with a singular appreciation of the physical and a healthy scepticism for the overtly intellectual. Ikeda implicitly understands that the impact of his art is not measured solely in complexity of process. “I don’t need to show techniques anymore,” he reasons. “It’s not about techniques, it’s more essential points. I’m setting out what I do in the future, so to depart to the new direction, data-verse was a very important process to reach this point.”

data-verse features as part of Ryoji Ikeda’s upcoming show at 180 The Strand. Produced and curated by The Vinyl Factory and Fact in collaboration with Audemars Piguet Contemporary, the exhibition follows five years of collaboration between Ryoji Ikeda and The Vinyl Factory, which includes the UK premieres of Ikeda’s supersymmetry in 2015 and test pattern [N°12] in 2017, as well as several vinyl albums and new commissions. The exhibition will present 12 large-scale, multimedia works, six of which will be premiering on the global stage, and five will be showing for the first time in the UK.

The show opens on May 20 and will run until August 1. Tickets are available now at the 180 The Strand website. For more information about Ryoji Ikeda and his work, you can visit his website and follow him on Instagram.

Watch next: Ryoji Ikeda Presents – point of no return 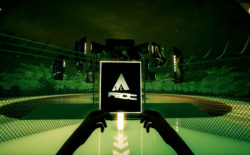