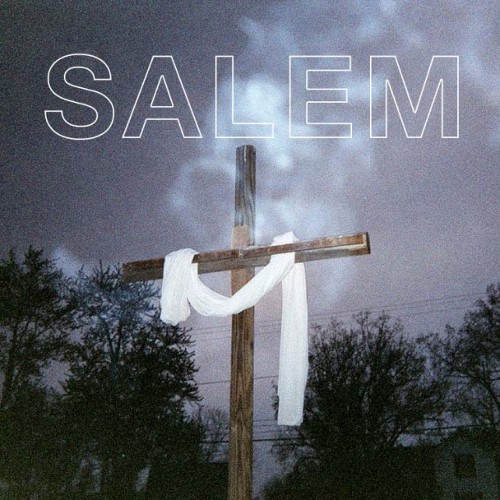 Drag, Witch House – whatever people want to call this fertile wave of screwed gothic music, informed by juke and Southern hip-hop as much as it is the Cocteau Twins, Salem are at the forefront of it.

This September, the Michigan trio (John Holland, Heather Marlett and Jack Donogue) will release their debut album, King Night, hoping to capitalise on the popularity of the 7” singles that proceeded it, most of which sold out in weeks. These are FACT’s first impressions of the record.

Okay, you know how Salem will tell you how much they love juke at any opportunity? This is them telling you again – and it’s not the first time they’ll remind you on King Night. Drum machines are really at the forefront, louder and more stripped back than on previous Salem tracks. ‘King Night’ is basically stuttering 808s, incredibly distorted explosions and operatic vocals, until some acid lines make it a foursome about half way through the track.

‘Asia’ and past single ‘Frost’ are very similar but with less distortion, which makes it a bit weird that they’re this close together on the album, but whatever. Acephale, one of the labels that Salem have released on in the past, described King Night as “impossibly heavy”, but I don’t know if it is, not compared to bands like Converge who achieve weight through their dynamics and don’t need distortion. But again, whatever. It sounds good.

The first track on King Night to feature rapping, with Jack doing his chopped ‘n’ screw-icide thing on the lead, while Heather’s beautiful backing vocals harmonise with the synths in the backdrop. The chorus is her saying “sick sick sick” so it sounds like “666”.

Great title, obviously. The 808s fall back a little for this one, with the emphasis more on stretched out vocals and long, reverberating notes. The different vocal approaches aside, there’s not a lot of switches in aesthetic between these first five songs – all those polluted neon tones disguised by the dark. If you played them in iTunes with the five second crossfade on you might think the first half of King Night was one song, and I don’t think you’d get bored of it. You really start to get engrossed in King Night’s world at this point.

Really bassy intro leads to what’s perhaps the quietest track on the album, with a car crash sample breaking up relatively serene synth notes that hang in the air. More screwed vocals.

One of Salem’s first singles, and still the best thing they’ve done, retooled for peak time. Drum machines are quicker and louder on the album version, with grinding waves of bass now backing up the chorus. If you haven’t heard the original, you can check it out here.

‘Hound’ is where the percussion gets a bit virtuoso, wooden toms tumbling through the space between massive waves of bass and vocals. Like ‘King Night’, this one’s heavy on the distortion.

Approaching King Night’s last track, the album seems to have made one thing clear: that there are roughly three types of Salem song: the heavy, often distorted bass ‘n’ drum machine jams, the more serene, Heather-led tracks, and the codeine rap ones. True to form, ‘Traxx’ features Heather on vocals over a hushed backing of hisses, closing doors and synths that circle like bats, while ‘Tair’ finds John rapping over Eastern samples.

But then on ‘Killer, the album’s closer, something changes. Yes, it’s another distorted track with stuttering 808s at its base, but it’s far lighter than the rest of King Night – not light in the sense that it’s not heavy, but in the sense that finally, the darkness has lifted over the album. The individual elements of the track are the same as the album’s opener, but for the first time on this record they sound hopeful, like a glacial call to arms. And it not only ensures that King Night ends on a high-point, but makes you eager for Salem’s future records to see if this more uplifting side of their sound is something they’ll explore.


King Night is released September 28 via IAMSOUND. You can hear the title track here.