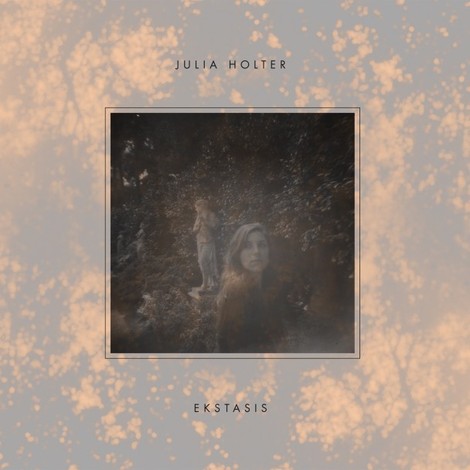 Julia Holter’s second album Ekstasis explores a less conceptually themed, but by no means less fantastical purpose to last year’s breakthrough debut Tragedy, a re-interpretation of Euripides’ Hippolytus. As a product of three years’ work while living in LA, Holter’s stimulus for this record was something more personal, though her interests in medieval illuminated texts, the cosmos, meditative serenity, nature and modal folk persist. Interestingly, despite the wide time in which they were constructed, these songs all sit perfectly alongside each other as a collection, as if magnetized.

Whereas Tragedy was quite rightly compared to the experiments of such pioneers as Laurie Anderson and Linda Perhacs, Ekstasis at times recalls the work of Kate Bush and Broadcast, with even Feist and Stereolab worth mentioning. Apparently created with ‘slightly’ better technology, and mixed to perfection by ex-Ariel Pink’s Haunted Graffiti guitarist Cole M. Greif-Neill, Ekstasis sounds cleaner than its predecessor, Holter’s pop sensibilities and craft more sharply defined.

Her vocals summon those of the Bush, Broadcast’s Trish Keenan, Kate Bush and – at a push – Nico. While possessed of more obvious confidence and character than before, Holter’s voice is not yet something instantly recognisable as ‘hers’, but then it hardly needs to be: it’s the way that her voice is situated amid shockingly well-executed instrumentation that defines her unique sound. She plays all these instruments herself: rich harmonium and drone strings, occasional reed-instrument wailing, sporadic drums and vintage drum machine, clean, naïve synth keys, harpsichord, organ, Rhodes, metallic bells and chimes, the return of her vocoder for ‘Goddess Eyes II’.

The songs of Ekstasis are at once intuitive and rigorously structured. There are innumerable elements within each composition that offer to take control and steer the material in a different direction at a given moment. Rather than drifting, the experience is like panning around a rock cut-away, full of surprises and things to observe yet all compressed into particular shapes and layers. The patient march of ‘Our Sorrows’, with its unexpected synth arpeggio finale beneath distinctly Indian vocal improvisations; the skipping, twisting organ melody and quickly shifting harmonies of ‘In The Same Room’; the slow swells and throaty delivery of ‘Boy In The Moon’; and the wild, almost manically joyous Bush-like cosmic folk pop of ‘Four Gardens’ are all highlights.

Ekstasis inhabits different sphere of music to Tragedy, seemingly borne of a whole other set of experiences, despite the common themes and the short time that has elapsed between the release of each. Everything about the record suggests a separation and a self-contained existence, like a second novel, and is wonderful for it.