oOoOO – Our Love Is Hurting Us 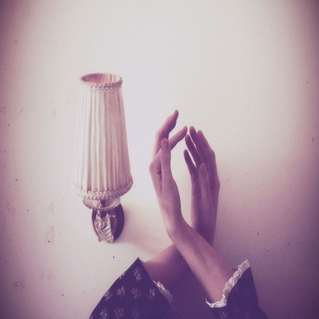 What the bloody hell happened to Witch House? Since its emergence, practically every artist associated with it has either (somewhat appropriately) vanished into thin air (everyone except Balam Acab) or shifted stylistically to great critical success (Balam Acab). I was talking to a friend about this the only other day when 24 hours later what should manifest itself in my inbox? A new EP from Christopher Greenspan aka oOoOO.

In fact, this is only the second official release from oOoOO in as many years; a fact which seems to have generated something of a backlash in some quarters on account of Greenspan’s seeming inability or lack of desire to develop the oOoOO sound beyond its original template and the lack of any substantial amount of new material.

oOoOO surfaced in 2010 alongside artists like Mater Suspiria Vision, Demdike Stare (c’mon, they definitely were), Salem, Ectoplasm Girls and the aforementioned Balam Acab as part of the burgeoning drag/witch house movement and issued his eponymous debut EP to rapturous acclaim with an inventive, and mesmerising, combination of murky but nonetheless affecting pop songs married to a chopped and screwed production style and more than a heavy smattering of hip hop (and crucially) R&B tones, textures and influences. Remaining with the Tri Angle label, April 2012 finally sees the sequel to oOoOO drop and whilst these new songs certainly do not represent anything like a major change in style there is a definite lurch towards a poppier sound.

Our Love Is Hurting Us comes wrapped in a brilliantly vague and eerie sleeve in exactly the same stylistic continuum of that first EP – washed-out colours, presumably female arms twisted in a sensual yet disconcerting pose, clothed in out-of-time fabric, carrying an odd implication of sex whilst remaining ghostly and out-of-reach. The polaroid-like quality further embeds a slightly uncomfortable feeling of voyeurism which the music does nothing to dispel.

So, what does actually lie within? Five songs coming in just under 18 minutes of superior darkly-stranded pop music, that’s what. And this really is pop music not some collapsing noise where catching sight of the tiniest grain of sugar in a pint of vibrating nails means that the composer is Paul McCartney in disguise. There are melodies and structures with middle eights and vocals (both original and sampled), beats that largely keep time and wouldn’t sound out of place on a decent R Kelly or Usher tune. As such, Our Love Is Hurting Us needs to be assessed as such and not as anything else. It utilises exactly the same components as Black Eyed Peas and nobody would refer to them as being, say, electronica.

That said, the EP’s opening bars though seem a world away from such ideals with chain-clanking beats tripping over a wildly out-of-sync vocal loop (the ‘TryTry’ of the title) and a monstrously rumbling bassline before a slow, arpeggiated synth kicks in and everything falls into rhythmic place with some wordless, ethereal vocals sealing the creepy deal. ‘Springs’ shimmers along on a rapid staccato R&B drum machine with old-skool rave sprinkles and yet another haunted female voice that manages to sound at once young and world-weary. If Britney had been allowed to dwell on her own internal chaos rather than ride the revitalisation machine post-Blackout the results would not have been massively dissimilar, and that’s a mighty compliment. ‘Starr’ surprisingly throws in a liquid-soft rock guitar solo over Cocteau Twins-esque underwater piano and what could be snippets of Christina Aguilera and/or Mariah Carey. ‘Break Yr Heart’  is a proper death-of-rave anthem and the closest Greenspan strays into Burial territory. Our Love Is Hurting Us closes with ‘NoWayBack’ which features a seductive vocal from Butterclock with an opening riff that wouldn’t sound out of place on Aphex’s Selected Ambient Works Volume II before a more dominant 80’s electro synth draws us to a close.

It seems odd to criticise Greenspan for a lack of development or progression – and progression is the kind of meaningless crap that people like Dawkins like to spout on a daily basis. Of course I’m not suggesting that we should stick our heads in the sand and wait for The Levellers tourbus to come to town but it has taken Burial nearly a decade to introduce even the slightest stylistic change, and surely it would smack of utter careerism if oOoOO had suddenly switched genres and started making funky house or something. I sense a certain amount of critical embarrassment with the praise initially lavished on witch house and drag but oOoOO sounded affecting, individual and original two years ago (really not a very long time) and still sounds so now. And what Burial is to rave, oOoOO seems to be for relationship. These songs are the ghosts of love affairs and the spectres of sex and we should be celebrating this for what it is: a strange, emotionally unsettling model of pop music that is high on melody, atmosphere and subtle drama.