Weird DJ rituals, PS3 and more: DVA and Ikonika quiz each other ahead of Friday’s Deviation x Hyperdub party. 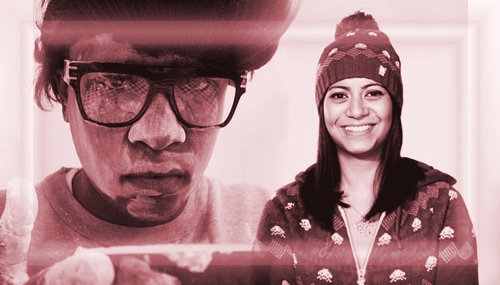 This Friday, 27 April, Deviation and Hyperdub are collaborating on a warehouse party that promises to be memorable, to say the very least.

Bossmen Benji B and Kode9 have assembled a crack team of DJs from their respective orbits and beyond to smash the dance, including Detroit house maverick Omar-S, 4Hero/2000Black man Dego, Martyn, Morgan Zarate, Cooly G and Ossie. At the heart of the bill are two Hyperdub back-to-back sets: Ill Blu vs Funkystepz, and Ikonika vs Scratcha DVA.

In keeping with the “versus” theme, and to save us having to do any actual work, we invited Ikonika and Scratcha to interview each other ahead of the event. The results of their email exchange are below.
Tickets for the Deviation x Hyperdub warehouse party are available here.


“I would rather be called Vincent Flannigen.” – Scratcha

Ikonika: Why are you called Scratcha and what’s the difference between that and DVA?

Scratcha: “An engineer once named me and my school friend ‘Itchy an Scratchy’ and it kinda went from there. The DVA bit came later for production when me and another school friend made up a label and a joint production name called Diverse Artz. I ended up hating it so just abbreviated to the catalogue number when I went more solo. Then I joined the two names together and now I’m stuck with it. I would rather be called Vincent Flannigen.”

I: Tell us a bit about your new live set…

S: “At the moment I’m still playing around with my live set and still loading in lots of stems and learning about Ableton. I bring my Microkorg which is fun and I’ll will be working with one or two singers from the album as well on my live shows across this summer. I played in Graz with A.L who sings ‘Why U Do’ a few weeks ago live for the first time and I loved it. It went down really well. I was suppose to play in London a few times before that but I decided not to, as playing in London sometimes is like playing to a pack of wolves. But I will soon.”

I: What do you think of Hyperdub?

S: “I think of Hyperdub like a refugee camp. Its good because me and maybe a couple other artists on the label can be knocking on doors, asking stuff and trying to get your foot in and people are like, ‘No, your music smells, go away – I don’t understand you.’ Then Hyperdub comes along and says, ‘Hey! You’ve got something.’ They bring you in, give you a wash, cut your hair, get you money and put you on the catwalk. Next minute you know people are taking pics, doors are opening and people are inviting you to their houses. It’s perfect for me. There aren’t many labels who just appreciate sound and creativity in this little London scene here. And the Hyperdub team is strong!”

I: What happened to UK Funky in your opinion? Where is it at now? Are you trying to get away from it? Do you feel a part of it?

S: “I just think people stopped making it. UK Funky still smacks the dance. My only problem is it’s harder to find new good tracks or any proper Funky tracks at all. Funny, I was chatting to Funk Butcher – who has championed UK Funky since day dot – about this recently. And even he said if he was still playing just UK Funky alone, he couldn’t do a tracklisting because it would be the same tracks each week but in a different order! [laughs I’m not trying to get away from it at all. Yeah, my sound has evolved and changed, whatever, but I love Funky. I suppose I am part of it. When people ask what I play, I still say House and Funky.”

I: So we’re playing back to back at Deviation x Hyperdub, should I be scared? Are we supposed to battle? What’s the deal?

S: “Is it a battle? I don’t know?! Tell me now so I can get some Buju Banton dubs ready [laughs]. Nah, don’t be scared. I’m excited. Let’s not discuss tactics in public, ‘cos Funkystepz and Ill Blu will probably cat our style [laughs].”

I: Oh, and a bonus question…When you’re wide panning your mono, where do you bus it?

S: “I bus it to the desk, roll off the bottom end, then I lay it down on the track and give it hard compression. After that, I dash it out on the streets. Free promo!”


“I think of Hyperdub like a refugee camp.” – Scratcha

S: So how did you become a Hyperdub artist?

I: “I got in contact with Kode9 around 2007, just sending him tunes on the net. He gave me my first release in 2008, then after that we talked about an album and that came out in 2010. I think he liked my odd productions. At that time dubstep was turning into something more powerful and I came out with a lot of colour and a kind of elasticity with my music. It works with a label like Hyperdub, as to me it’s never conformed to one particular genre. I started out making dubstep but it wasn’t the normal style, I never used wobble, and now I’m just using other influences that have nothing to do with dubstep. These days people get really confused when they see me play out, ‘cos I’m usually advertised as a dubstep DJ, but I never really play any. [laughs]”

S: Your music has always had its own fresh lane if you know what i mean and I’ve always thought of old platform games when I first heard your earlier sound. Are you in to games consoles? And is it something you think about when making tracks?

I: “I used to be a lot more into video games back in the day, growing up. I still play PS3 though. I’m really into Skate 3 at the moment. It’s the only game where I can really feel like I’m letting off steam. I can’t say I think about games that much when I’m building. It was always more of a subconscious thing really, but it definitely was a major influence in my early productions.”

S: I’ve seen you DJ and you’re sick. Is there anything you have to do or can’t help doing before you leave your yard to go to a show?

“Yeah, I’m a bit OCD actually. I do have certain rituals. I usually need a disco nap, then wake up have a vodka based drink or a beer [laughs]. My DJ bag must be packed in a special order. The night before I have a weird thing about practicing packing then I unpack everything, then do a ‘master’ pack when it’s time to roll. You may think that’s very abnormal but it gives me peace of mind and If I don’t do that I usually forget something or can’t set up properly when I get to the club.”