Free jazz and bug powder collide on the soundtrack for Cronenberg’s adaptation of Burroughs’ “unfilmable” novel. 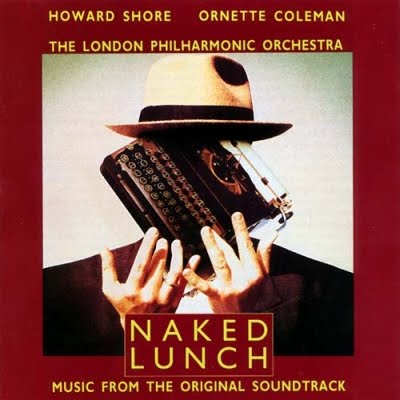 
Howard Shore is decidedly not an oddball.

There’s one constant to David Cronenberg’s films, besides horrible things happening to the human body. It’s the music of Howard Shore.

Shore is one of Hollywood’s most garlanded and in-demand composers: his work on a film about a gang of plucky, do-gooder midgets, The Lord of The Rings: The Return, won him two Oscars (Best Original Score and Best Original Song), and other notable credits include The Silence Of The Lambs (1991), The Twilight Saga: Eclipse (2010), the redoubtable Mrs. Doubtfire (1993) and a number of films for Martin Scorcese (most recently Hugo). Though he has an innovative streak, Shore is decidedly not an oddball; he’s not a cult or iconoclastic composer in the way that, say, Carpenter or Badalamenti are. He’s not only capable of delivering the kind of generic, rousing orchestral scores that big studios, and big audiences, feel safe with; it’s what he spends the vast majority of his time doing.

It was David Cronenberg who gave Shore, a fellow Toronto native, his first break, commissioning him to soundtrack 1979’s The Brood. Shore has gone on to score every one of Cronenberg’s films bar the aesthetically anomalous The Dead Zone (1983), right up to this year’s lukewarm psychoanalysis romp A Dangerous Method and the imminent Don DeLillo adaptation, Cosmopolis. Interestingly, the quality of the score that Shore has composed in each case has mirrored the quality of the picture – A Dangerous Method‘s soundtrack, for instance, sucks, while that of Videodrome was astonishing, a push-pull synthesis of “natural” and electronic sound that beautifully dramatised the bodily transformations experienced by James Woods’ slimeball hero, Max Renn.


Coleman is of course incendiary throughout – he knows no other way.

1991 saw the release of Naked Lunch, Cronenberg’s long-gestating adaptation of William S. Burroughs’ supposedly unfilmable novel (an irritating epithet: nothing is unfilmable). The film, though far from perfect, succeeds as a love-letter to Burroughs – Cronenberg interprets his textual source material as loosely as Wild Bill interpreted life, and seeks to further blur the distinction between the author and his protagonist, William Lee (played by Peter Weller). The resulting film is, of course, crazy – no adaptation of Naked Lunch could fail to be, even if Richard Curtis were in the director’s chair – but this craziness is tempered by Cronenberg’s gift for suspense and storytelling. Though it has numerous experimental flourishes, Naked Lunch is not an experimental film. Like all Cronenberg’s mature work, it’s bound by Hollywood conventions, which only serves to make its underlying subversiveness more potent.

The same goes for Shore’s musical treatment: it’s a Hollywood score with experimental flourishes – but what flourishes. They come courtesy of Ornette Coleman, whose free improvisations dance across pools of darkness and light conjured by the London Philharmonic Orchestra. The meeting of orchestral grandeur and New Thing cool is inspired; surrealist noir is by and large the tone of the film, and with the help of Coleman that’s precisely the tone that Shore, ever the artisan, supplies in his treatment. His grave string charts nod to Bernard Hermann’s Taxi Driver and, on the title piece especially, Eric Demarsan’s Le Cercle Rouges, while subtle Arabic-cum-North-African phrasings conjure the film’s (imaginary?) Tangiers setting (the influence of the Master Musicians of Jajouka, whose own music features extensively in the film, is palpable).


The meeting of orchestral grandeur and New Thing cool is inspired.

MMOJ collaborator Coleman is of course incendiary throughout – he knows no other way. His playing ranges from bluesy lyricism (‘Intersong’, ‘Ballad/Joan’) to muted rage (‘Cloquet’s Paradise/Midnight Sunrise’), but whatever mode he’s in he demonstrates tremendous sensitivity to Shore’s settings, and is equally adept at harmonising with the orchestra as he is at breaking from it entirely. The only pieces of out-and-out free jazz delirium are ‘Bugpowder’ and the industrially accented ‘Interzone Suite’ – for these, the orchestra takes a toilet-break and Ornette lets rip, ably supported by his son Denardo’s drums and Barre Phillips’ bass.

The state of the Hollywood score in 2012 is rather woeful – a situation to which Shore’s dreary day-to-day work has, alas, contributed hugely. So woeful, in fact, that any competent departure from the symphonic norm – Cliff Martinez’s seductive but hardly seismic Drive being the most talked-about recent example – is greeted as a visionary work. Naked Lunch might bow to the demands of the Hollywood middlebrow in terms of its orchestral backbone, but the freedom and centrality it affords a modernist like Ornette is, at the end of the day, a thousand times more radical than a couple of cool synthesizer sequences and a saccharine, retro synth-pop ballad.