Santigold: Master Of My Make-Believe 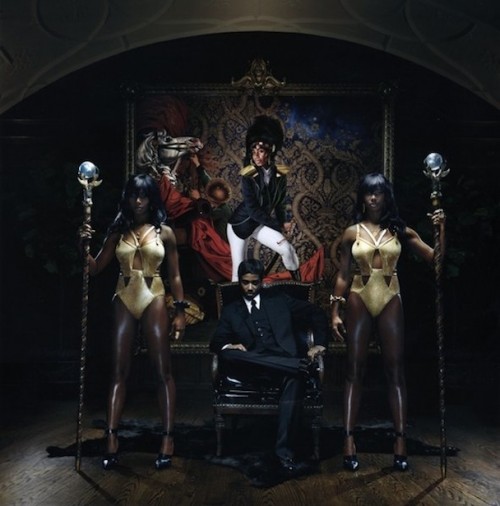 Few do jaded quite like Santi White, aka Santigold: whether singing, rapping or something in between, her voice is primarily characterised by an in-built side-eye and perpetual curl of the lip. But the contempt with which she coats her songs doesn’t feel like a pose, though it’s certainly triggered by other people’s poses. Rather, it’s chronic – a consequence of spending far too long around commonplace bullshit, and thoroughly infused with the recognition of the damage it can do to one’s own self. Remember, White is a former A&R; it shows.

The trick White pulled off on the best cuts on her eponymous 2008 debut – specifically, the still thrilling opening four-song stretch – was to manifest this grumpy, introverted stance in resonant, outwards-facing songs that felt like anthems. Her concise follow-up is trimmed down in every sense: its 11 songs mostly eschew the full-throttle propulsion of ‘You’ll Find A Way’ and ‘Say Aha’ for clattery, percussive workouts and subdued, elegiac balladry. Master Of My Make-Believe consequently feels slight in comparison to its predecessor, and its missteps more glaring: ‘Freak Like Me’ and ‘Look At These Hoes’ in particular feel like attempts to leaven the album’s low-key feel with playful, cutesy irony, but in taking tired aim at obvious targets White only succeeds in shooting herself in the foot.

Otherwise, though, it’s a strategy that pays off. Underpinning the shots White fires at the world has always been a deep-seated melancholy that she brings out effectively here: in the way she croons, “You’re on your own now” even as she preaches self-reliance with military tattoos and reverb on ‘God From The Machine’; in how, a few songs later, she collapses into the arms of world-weariness on ‘The Riot’s Gone’ over what sounds like a broken-down version of that tattoo, and you’re not sure whether it’s victory or defeat.

White specialises in seeing through and calling out the nonsense that people habitually try to get away with – but what makes her hard to pin down is how she follows that up. Unlike the woman with whom she is frequently compared, MIA, Santigold is an uneasy revolutionary: she can sing movingly of “a life worth fighting for” on ‘Disparate Youth’, the closest this album has to an anthem, but her Pavlovian response to the world’s hollow pretensions has long been to turn in on herself. Her gaze has widened beyond Brooklyn artists on Master Of My Make-Believe – ‘Disparate Youth’ makes a convincing claim to capture a generational voice, while the events of a year of global protest lie beneath ‘The Riot’s Gone’ – and the result has been to give her music more heart.