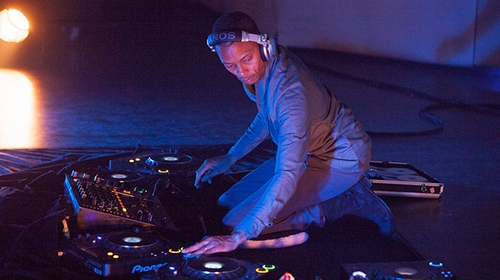 The trudge from club to dorm, or stage to tent, is often the most dispiriting part of the festival experience. Not so at Montreal’s MUTEK festival.

Stumbling home to my hotel after the first night of festivities, I encounter a giggling crowd of ten gathered around a luminescent plinth. With each touch and tap, the plinth changes colour; with each colour change, a host of enormous Oliver Postgate-style projections scatter, multiply or fall into line on a nearby wall. Pushing on, I take a shortcut through a grassy reservation; suddenly, I’m swamped in dry ice being pumped from underfoot. I hear whoops from across the road, and look up to see teenagers swooping towards traffic on hi-tech musical swings, situated smack bang in the middle of a traffic island.


A cybernetic bolt-on here, a spot of digital augmentation there – it’s almost as if the city itself has been temporarily upgraded.

A cybernetic bolt-on here, a spot of digital augmentation there – it’s almost as if the city itself has been temporarily upgraded. MUTEK’s programmers might lean towards the speccier end of the spectrum, but there’s a real come-one-come-all feel to the festival. Ad hoc showcases sprung up in city squares and on underground platforms. This civic spirit led to some odd culture clashes, too: many of the festival’s flagship spaces are planted deep in the red light district, moments away from Sexotheque and Cafe Cleopatra. One can only hope some leering banker had his lapdance disturbed by the bass rumble.

One such space, the plush Monument National, was teeming on Wednesday. Biosphere and Lustmord, dressed as a father-son Reservoir Dogs tribute act, coaxed burbles and whines out of their laptops. Bleak Derek Jarman-grade/greyed images scrolled by. The set-up was occasionally a touch hokey: pairing images of military bunkers with a doomy industrial soundtrack is about as radical as the 1922 Committee membership charter. But much of the pair’s dextrous programming hit home, with the noisier moments really taking off in the theatre’s immaculate acoustics. The crowd thinned for Robin Fox‘s audio-visual performance, which was a shame given his spellbinding light-tantrum. Fox unleashed an armoury of heavy bass tones and forensic glitchwork, all of which were given visual representation through a responsive Splinter Cell laser; revellers were treated to concentric rings that curled like an open rose, exploded geometric shapes, nebulae that drenched the room in light. A genuinely gobstopping spectacle. 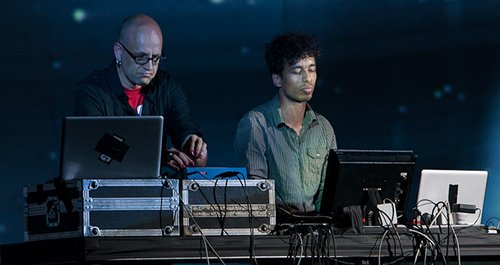 It was prankster’s night on Thursday. Ben Shemie (of Suuns) premiered his Transmission 1 piece. Billed as an English/French duet between vintage FM receivers, the result was a tuneful piece of electronica, albeit one that only intermittently capitalized on its interesting concept. Jan Jelinek and Andrew Pekler, meanwhile, played the ‘hits’ of forgotten experimentalist/musicologist Ursula Bogner (a character – whisper it – almost certainly invented by Jelinek). Elliptical slogans, mildewy photos and cosmological diagrams from Bogner’s supposed personal archive cycled by as the pair tampered with oscillators and spooled tape. Shot in Britain’s Most Haunted night vision camera, their hands clinging onto the same mixer, the pair appeared engaged in a seance, reverently channelling their subject’s lost voice. Pierre Bastien and Espen Sommer Eide upped the oddity stakes with a showcase of their madcap instruments, including an accordian/Monome crossbreed and a makeshift MPC made out of metal pendulums bolted to a wooden panel. Their ingenious wee contraptions won a rapturous reception, although the magic was dampened by an underwhelming second piece.


Jeff Mills’ relentless and opaque strand of techno remains enthralling; he commanded his sound, and commanded the room.

Over at FACT’s night at the Métropolis, Shackleton‘s not the austere performer you might expect from his brittle productions. The Berlin resident jumps up and down, wobbles and lurches, goes in for the theatrical knob twiddle. The beats hit far harder in a live setting , and arm-raising drops arrive with surprising regularity. Aired to a room of heaving bodies, those drawbar organ riffs – so prim on record – take on a delirious, Drexciyan quality. Monolake‘s set, acknowledged by many as one of the shows of the festival, was arguably tougher going. Even though some of the digital pyrotechnics are extraordinary (he doesn’t so much drop the bass as belligerently piledrive it into the ground), his set often feels like a forensic parade of neat technical tricks. There’s no doubt that Robert Henke’s an inspired engineer, but this member of the jury is still out on whether he’s a natural musician. Where Monolake keeps it disciplined, Salva cuts loose: his RBMA sponsored set is a jamboree of head-snap and mutant carnival bizness. Jeff Mills, as gamine as ever, replicated his The Messenger and Sleeper Wakes projects with due diligence and absolute precision. His relentless and opaque strand of techno remains enthralling; he commanded his sound, and commanded the room.

Friday welcomed Kode9, Ms. Haptic and MFO’s Her Ghost, one of the best-attended shows of the festival. MFO’s visual work twisted footage from Chris Marker’s loopy La Jetee into wobbling, rapidly changing new arrangements (a hyperkinetic hauntology, if you will). Kode9’s score, all factory floor rumbles and muggy martial pomp, also impressed. Unfortunately, the piece was thoroughly undermined by poor scripting. Cod-profund mumbo jumbo is the order of the day, and Ms Haptic’s Philip-K-Dick-via Beatrix-Potter cant sounded not a little out of place. There’s real promise here, but this work in progress still has some way to go. If Her Ghost feels like a starting point, Roly Porter‘s set is an endgame, the total apotheosis of his recent new direction. The Aftertime LP was an involving series of murky soundscapes; live, it’s practically a manifesto, a forceful demonstration of how monstrously heavy bass can be incorporated into classical composition. Maximal bass frequencies, incidentally, seemed like a recurrent theme throughout the festival – bracing, but by the end of Porter’s set, this writer can’t be the only attendee who was suffering from pummel fatigue.

From the moment I’d arrived in Montreal, rumours had already started to percolate that Tim Hecker & Stephen O’ Malley‘s feverishly anticipated church show on Saturday was going to be staggeringly, ear-wateringly loud. (Side note: MUTEK punters clearly feel no stigma about wearing earplugs – unambiguously a good thing). The Eglise Unie St. James was a ravishing space, its formidable organ bathed in clementine and pinkish light, the stage a tangle of amps and vestibules (“these gothic gablings are, like, sooooo pretty”, as my neighbour had it). The premonitions weren’t wrong: Hecker’s heavyweight drone, coupled with scabrous interjections from Malley’s guitar, rattled the church to its sacred foundations. There’s a devotional intensity to the set, and O’Malley’s improvisations add a wonderful element of unpredictability. As expected, it’s one of the undisputed highlights of the weekend.

The cannier punters spent Saturday evening in the Satosphère, a concave structure plastered with wonderful stereoscopic visuals. Jeremy Greenspan (of Junior Boys) teamed up with Christina Sealey and Jessica Lanza to play JS Bach material on ancient-looking oscillators – the results were kooky and wonderful in roughly equal measure. Keth Fullerton Whitman, meanwhile, looked puzzled, as if trying to unpick a convoluted maths puzzle. His madcap algorhythms point back to his drill’n’bass past, but there’s an ascetic quality that suggests his set is designed to engage the mind rather than the feet. Sometime beautiful, sometimes abstruse, it’s mesmerising machine music. Clark‘s subsequent set is a tad surprising: particularly given MUTEK’s chin-massaging pedigree, we might have expected an emphasis on his gentle Iradelphic material. Instead, the Warp mainstay pulls out a party set of head-nod and mechanoid techno. The crowd begin on his side, and their faith is repaid with a well-crafted and dynamic hour of music.

Treats abounded at the open-air picnic which rounded out the weekend: Nicolas Jaar impressed with a goodtime DJ set of weirdo hip-hop and rare groove, and Matthew Jonson’s turned out a wonderfully low-key performance to forty people in a park. After so many velvet theatre seats and Q&A panels, this open air jam brought things to an unusally breezy close. But, then again: for many of MUTEK’s star turns  – Fox’s laser, Hecker And O’Malley’s rollercoaster gut-turning, the IMAX-scale visuals found in the Cinechamber venue – only some neat packaging and a whiff of the academic separates these highbrow experiences from more populist bodyshocks (the multiplex, the log flume, the Trocadero).  Not so very different, in a way, from Cafe Cleopatra’s tasselled thrills.