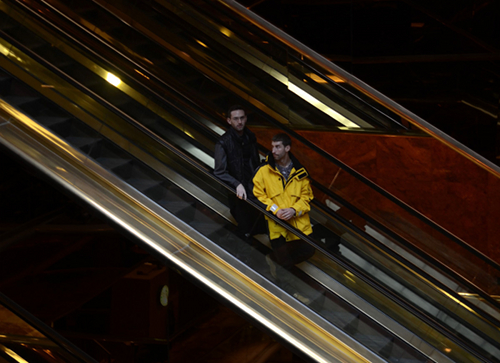 
We asked Gatekeeper if they could talk to us about five records that influenced their upcoming album, Exo. They said no.

What they did agree to do was to pick five YouTube clips that they were vibing off during the making of Exo, a reputation-making LP that sees them reject early 80s horror soundtrack pastiche in favour of macho EBM, 90s urban sci-fi atmospherics and high-velocity acid techno, all rendered with the impossible sheen of contemporary Hollywood sound design. In their own words, it’s a record about “pineal activation, IMAX phantasy, drippy acid ecosystems and HD….everything.”

These guys aren’t kidding around. Exo is accompanied by “a first-person gaming environment” specially designed by artist Tabor Robak, in which one explores various worlds inspired by the tracks on the album, and they’re also offering an Exo font, also custom-made by Robak, as a free download.

You can listen to Gatekeeper’s excellent ‘Tree Drum’ track via the Soundcloud player above, and over the next five pages view their apparatus for better understanding “time, density, and the man vs nature dichotomy”.

Exo is out July 17 on Hippos In Tanks. More information here.

“Although the old-timey intro is annoying, this IMAX bumper always inspires a standing ovation before the movie even starts. Film studios should work to make their 3D and 5.1 anywhere near as effective as this over-produced high definition intro sequence.”

“We knew our collaborator Tabor Robak was using the Unity platform to develop the Exo environments, so watching cinematic pan-throughs of similarly rendered jungle-scapes was a way for us to test our music against relevant visuals. Love the ray-traced plant shadows and appropriately atmospheric ‘exterior’ sound design.”

“When the Romans re-discovered Tor in the 5th century, they allegedly found the ruins of an observatory thought to have been built by an advanced ice age civilization. Now, its sacred megalithic history draws wierdos from around the world to visit the huge hill in southwest England. It was probably our favorite of the world heritage sites we got to visit last year before recording Exo. Video by Thunderhorse, featuring special guest.”


CANOEING THROUGH A FLOODED MCDONALD’S

“One of our favorite movies in full on YouTube, featuring an incredible modular synth soundtrack by Michael Stearns. A beautiful meditation on time, density, and the man vs nature dichotomy. Shout out 20 min+ Google video search filter.”