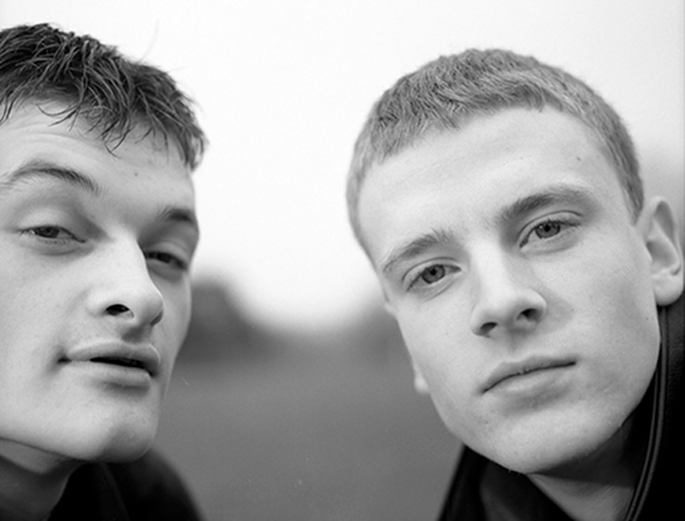 Source Direct (alternatively Sounds of Life, Mirage, Intensity, Hokusai, Oblivion) were Phil Aslett and Jim Baker, two teenage friends from St Albans, who between 1994 and 1999 produced some of the heaviest, most abstract drum and bass ever conceived.

In the process they pushed the boundaries of what could be expected from a music written off by the mainstream press just a few years before as ‘toytown’ rave. Along with Photek and Goldie they spearheaded a new minimal, auteur aesthetic within a scene more usually associated with the messy, practical craftmanship of scenius. And with the rest of the Metalheadz camp they cleared a space for dark music in intimate basements which reverberated through the next decade at nights like FWD and DMZ. To paraphrase Mark Fisher, they sounded like the future rushing in, but not the future imagined by Jeff Mills or Juan Atkins; this was a more dystopian future, the kind imagined in John Carpenter’s Prince of Darkness or James Cameron’s Terminator films. 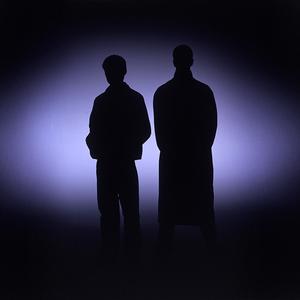 Source Direct’s early experiments combined the ubiquitous amen breakbeat with the drifting pads of Detroit, and early on they were associated with the loose grouping of artists on LTJ Bukem’s Good Looking label, or more widely, the ‘intelligent’ jungle scene. Later, in tandem with the music’s darker, noisier turn in 1996 and 1997, they would develop an approach which favoured looping breakbeats over pulses of analogue bass and suspended, tense atmospherics.

Part of Source Direct’s mystique was their enigmatic outsider status; they rarely gave interviews, never DJ’d; most importantly, their records sounded like no one else, particularly the brooding, angular brutalism of their work for Metalheadz and Razors Edge. In common with fellow travellers Photek and Digital, Source Direct’s base outside London meant that they were able to cultivate a certain distance from dancefloor trends, and they demonstrated an unmatched ability to integrate the minimal attitude of, say, Robert Hood with the bass weight of the British hardcore tradition and the paranoid menace of Marathon Man or The Parallax View.

The years since their dissolution have only seen their reputation grow stronger, which is ironic, since while well-known when active they were never ‘big’ artists in the sense of having a huge hit (like Dred Bass or the Helicopter tune), nor did they ever have a significant public profile through DJing. In fact between 1994 and 1999 you were very unlikely to have heard Source Direct DJ in a club, in common with many members of the production avant-garde in jungle. Their work pre-dated the emergence of the producer-DJ model and the pair tended to outsource their tunes to the adventurous selectors around the Metalheadz camp like Kemistry and Storm, DJ Lee, Loxy and of course Grooverider, Fabio and Bukem.

“I love and own every Source Direct (including Hokusai, Intensity, Mirage, Oblivion, Sounds of Life, X-Files). I wouldn’t give them away, even for a complete KMS or UR catalogue.” – Felix K (Hidden Hawaii, QNS, 31)

Source Direct were, along with Photek, Alex Reece and Goldie, one of a handful of stand-out artists who were signed to major labels in the wake of jungle’s popular explosion, although it’s difficult to see how they could have ever sold enough units to satisfy a major; certainly there was a trend at the time of A&Rs signing drum and bass artists who were well-respected without really knowing what they were about, or really thinking what they were going to do with them. 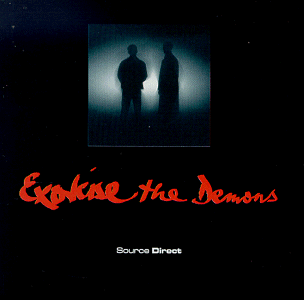 The duo followed Photek to Virgin sub-label Science in 1996, though the fruits of that enterprise (apart from, perhaps, those identical black BMW M3s) only emerged in 1999 with the arrival of the long-awaited LP Exorcise the Demons. It’s widely accepted that this album didn’t reach the heights of their single releases and in any case the world of jungle and drum and bass had by this time changed irrevocably. Ed Rush and Optical’s crowning achievement, Wormhole, had been released to huge acclaim, and along with (to name a few) Ram Trilogy, Jonny L’s ‘Piper’ and classic LP Magnetic, DJ Trace and finally Bad Company established the dominance of the new tech-step movement. It should be noted, however, that Source Direct remained a lasting influence, for instance on the Renegade Hardware sound.

Looking back, Source Direct seem to stand on the threshold between two worlds; the relentless sonic, rhythmic and tempo experimentation of hardcore and jungle on one hand and the sleek, shark-like propulsion of of drum and bass  on the other.

Jim and Phil split acrimoniously around the turn of the century. Jim went on to run the short-lived label Demonic, which was notable for putting out Al Green and Damon Kirkham aka Instra:mental’s first three releases (starting with ‘Yo Bitch’ in 2000). Phil re-emerged a few years later as Phil Source, running the Vampire label in the mid- to late 00s and DJing occasionally.

It should go without saying that what follows is a personal selection of favourites. In any case there isn’t really a bad Source Direct record, and all are worthy additions to a jungle collection.

[EDITOR’S NOTE: Where possible we’ve embedded audio for each release; to those looking to explore Source Direct’s music further, we’d recommend these mixes of all Source Direct material by The Law.] 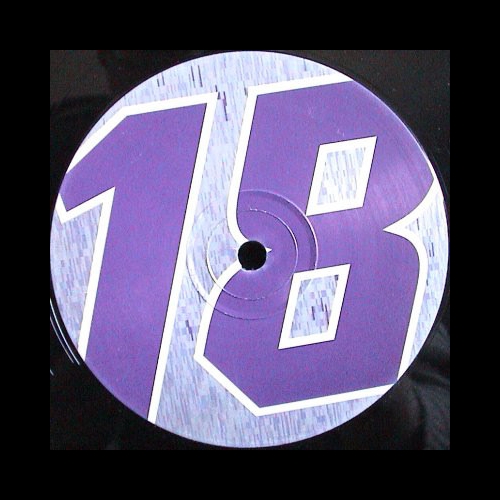 Sounds of Life was the original production name of Jim Baker and Phil Aslett; the duo began making demos under that name when they were only 15. Photek – a fellow St Albans native, transplanted to Ipswich, who engineered their early work and whose career they would shadow for half a decade or more – got them their break on seminal techno-oriented breakbeat hardcore and jungle label Certificate 18. Paul Arnold’s imprint had carved out a reputation for synthesising the breakbeat with the sound palette of second wave Detroit artists like Carl Craig and the UK techno essayed by The Black Dog, Plaid and Warp’s Artificial Intelligence series. Early releases like Authorised Riddim’s ‘Split Personality’ set the template; Baker and Aslett first appeared in late 1994 with the 12″ ‘Currents’/’Intellect’, followed by an EP featuring early stand-out track ‘Release the Bells’, whose haunting, reverberating string melody is immediately redolent of B12 or 69’s ‘Desire’. 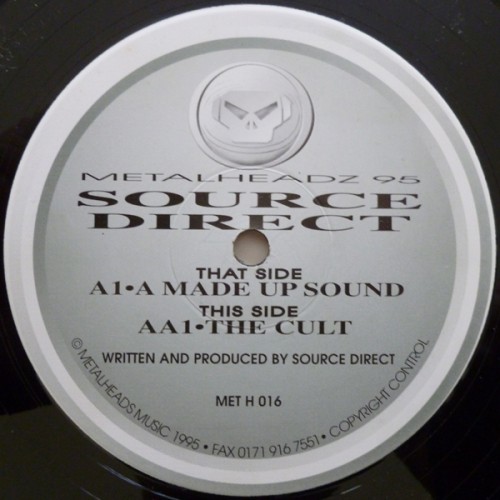 Dave Huismans’ production alias is, I’m sure, an homage to this classic 12″. This was Source Direct’s first release on Metalheadz: the a-side is a sultry 808 and apache workout tinged with an obscure vocal sample and shows just how gifted the pair were at creating an impact from the barest set of sonic components. Simultaneously warm and unsettling (as opposed to the B-side, the Enter the Dragon-sampling breakbeat funk of ‘The Cult’ – which is just plain sinister), ‘A Made Up Sound’ appeared on the influential Platinum Breaks compilation, which established Metalheadz as a force in the minds of the wider public. 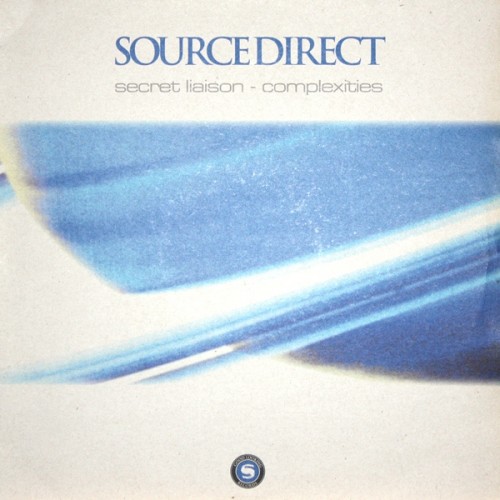 To many in 1995 Source Direct would have been primarily known as  ‘intelligent’ or ‘Speed’ artists (after Bukem and Fabio’s legendary midweek club, held at the Mars Bar in central London). Speed, and then Metalheadz at the Blue Note shortly afterwards, helped pave the way for jungle and drum and bass to be played to smaller audiences by DJs looking for a space beyond Saturday night raves to experiment with deeper material. Artists had of course made more challenging material before the advent of these clubs, but you were more likely to listen to it at home, rather than hear it in raves, since everyone was preoccupied with playing the latest DJ SS dubplate.

The warmer side to Source Direct found its ultimate articulation in what many regard as their greatest release – the anthemic, sublime ‘Secret Liaison’ on Bukem’s Good Looking imprint. More subtle in tone and sophisticated in affect than most of the other material on the label, its combination of amen and shimmering, metronomic bell samples swathed in washes of Daniel Lanois-esque guitar captures, in six minutes, the statuesque brilliance the best jungle was able to evoke. 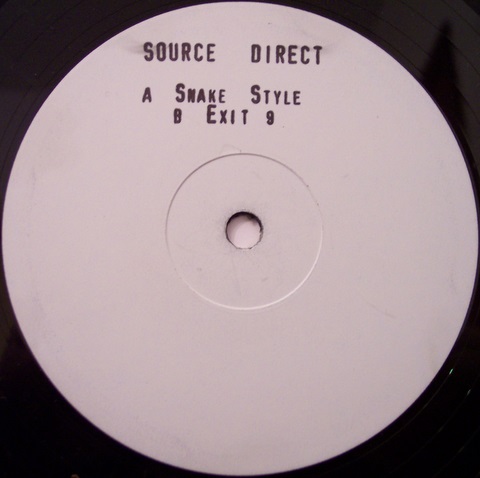 A particular favourite amongst many fans, this 12″ found Source Direct developing the darker tendencies which marked them out as singular artists as early as 1995. ‘Snake Style’ sounds strikingly contemporary, with its breakbeat lifted from the James Brown live version of Archie Bell and the Drells’ ‘Tighten Up’ and introduces the martial arts sampling techniques which would find favour on other releases like ‘The Cult’. ‘Exit 9’, on the other hand, is an amen tear-out of superb quality (only surpassed in my mind the by ‘The Crane’, of which more later) and became influential in the mid-2000s off the back of its popularity amongst crate-digging experimental drum and bass DJs like Fracture and Neptune, Equinox and Bailey. 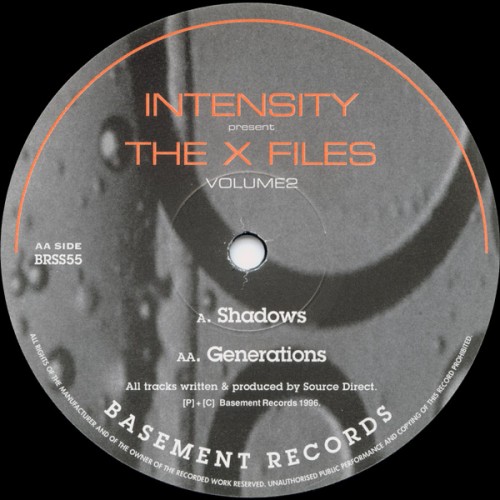 Basement Records of Reading (home to seminal breakbeat hardcore and jungle tekno explorations in 1992 and 1993 from Kev Bird, Wax Doctor, Jimi Polo and others), along with Thames Valley compatriots Streetbeats, became home to a series of 12″s from Source Direct and Photek between 1994 and 1996. ‘Generations’ balances the suspended minor key dynamics of the Hokusai releases with the immediacy of the Oblivion and Mirage 12″s over battered loops of the Soul Pride and amen breaks. 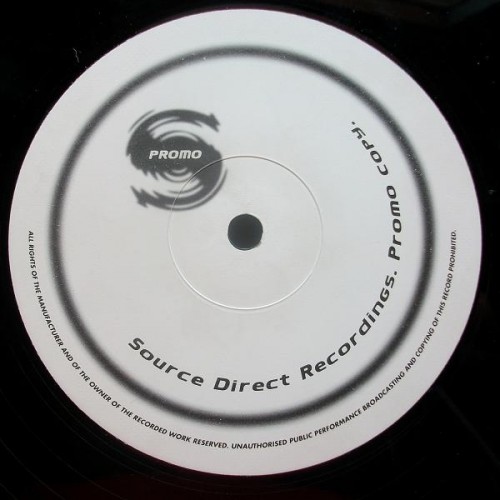 In my opinion The best Source Direct amen tune bar none (no doubt there will be howls of disapproval from those who would place ‘Black Rose’ or ‘Snake Style’ higher) and a textbook example of how to balance dark but restrained atmospherics with the detached martial poise of a well-engineered amen. Note the nod to martial arts in the title – territory explored by Source Direct elsewhere (‘Snake Style’, ‘The Cult’) and also – famously – by Photek on ‘Ni-Ten-Ichi-Ryu’. This was a huge Blue Note tune (the venue where the duo’s intensity and oppressive approach to sound really came in to its own) and a sign that they had started to turn up the dancefloor pressure. 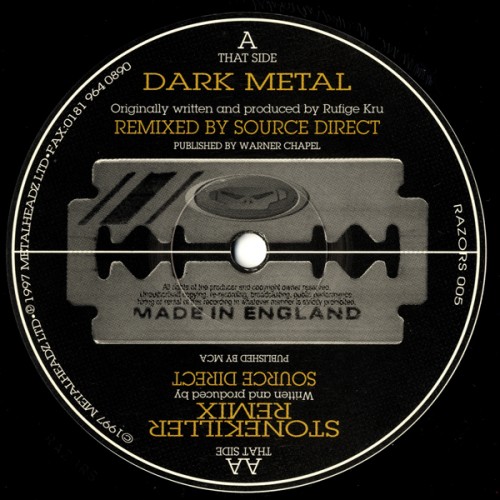 Although it’s difficult to pinpoint exactly when, in late 1996 or early 1997 Jim and Phil arrived, along with Photek and others, at a darker, more technical sound which reflected wider trends in drum and bass and prefigured the turn to the stepping, techno-influenced structures of Ed Rush and Optical. Quite possibly the pinnacle of Source Direct’s later, darker sound, the ‘Dark Metal’ remix weaves the looping, angular flex of Goldie’s original into a kind of apocalyptic delirium. ‘Stonekiller’ on the other hand – either in original or remixed guise – is pure dread on wax. Lifting an outrageously huge sample from Aphex Twin’s ‘Hankie’, this is jungle reconfigured as a menacing, skunk-addled cyborg sound, with breakbeats repurposed far beyond their recognisable origins in funk and soul. 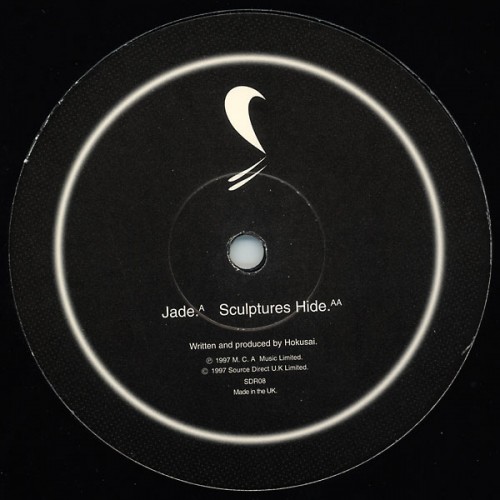 Jim and Phil seemed to deploy the Hokusai alias when at their most enigmatic and sultry; think Diamond Life-era Sade refracted through the scores of Harold Budd. These releases, on their own Source Direct Recordings label (a boutique operation before such things were fashionable or obligatory) in particular were accompanied by exquisite artwork sleeves, from a time when vinyl still made money! 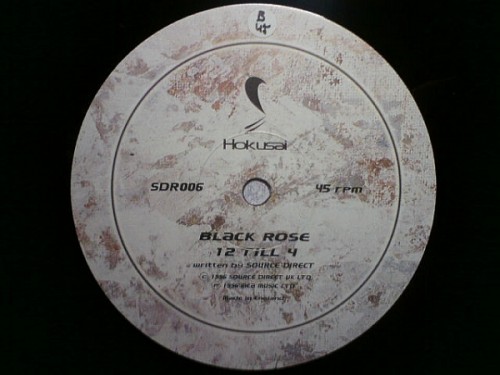 The other side to Hokusai; a particular favourite of Kode9 and one of the biggest Source Direct tunes at the Blue Note, ‘Black Rose’ is Source Direct at their most deranged. All the classic elements are present: sustained, dissonant analogue chords, screeching raven samples, barely restrained menace and strangely resonant basslines wrung from unidentifiable sources, all built around a militant rhythm section combining the breakbeat from DJ Gwange’s Legend Records classsic ‘Motionless’ with a cavernous, sub-aquatic amen.