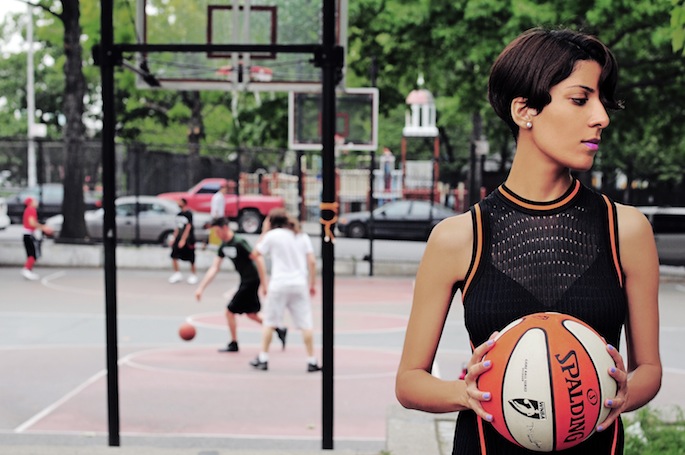 The global bass fusionist returns with an especially personal EP.

The Desert Strike EP explores the themes of desensitization through real and virtual experiences, through the prism of Al Qadiri’s experiences growing up in Kuwait during the Gulf War. As previously reported, Al Qadiri and her sister owned and played a first-person-shooter called “Desert Strike: Return to the Gulf” just a year after the conflict.

Preview the EP below, which is out now on Kingdom’s Night Slugs sister label Fade to Mind. In addition, we spoke with Al Qadiri briefly over email about Desert Strike.

How old were you when Kuwait was invaded? What do you remember about the experience?

“The invasion was August 2nd, 1990–about a week after my 9th birthday. I remember thinking every day could be my last, so my sister Monira and I played video games with a fanatical fervor to match.”

A year after the war, you bought Desert Strike: Return to the Gulf for Sega. Do you remember your enjoyment of the game being affected by the reality of your experiences? What did your family think?

“I didn’t enjoy playing that game. I’m mainly attracted to video games because of their soundtracks, That game had no soundtrack, beyond the intro. The soundtrack was an eerie silence pierced by sickeningly high-pitched chopper blades, punctuated with war FX. Me and my sister were taken aback by it, my parents didn’t interest themselves in the content of our games.”

“It’s the strangest period of my life, but I mostly make music to heal myself of some evil. It’s a common practice.”

“The invasion was August 2nd, 1990–about a week after my 9th birthday.

Was there a specific stylistic palette you were working with on this EP?

“Stylistically, it’s a bit like grime-y synths riding over choral harmonies and bass swells, permeated by a buffet of explosive FX.”

Between Genre-Specific Xperience and your music as Ayshay, your work has been conceptual but very personal. Do you think the music could exist without the conceptual framework?

“It can, but I enjoy concrete visual scenarios in music. I made music as a kid to make soundtracks, that’s what I still do today.”

Genre-Specific Xperience was accompanied by videos that explored the genres and their visual representations. This project seems well suited to a similar approach. Are there any plans for that, to explore the actual/virtual line?

“There are videos being made for the record, ‘Ghost Raid’ by Thunder Horse Video and ‘Desert Strike’ by Sophia Al-Maria, premiering in 2012. Keep an eye out.”