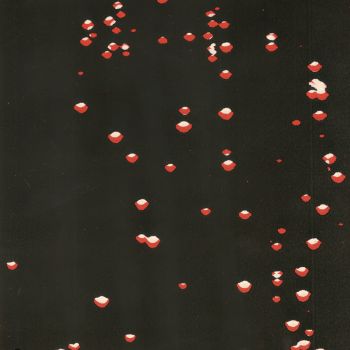 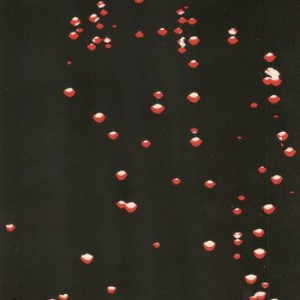 When Nashville’s Ren Schofield – alias Container – started touting his misshapen techno on John Elliot’s Spectrum Spools label last year, one thing was immediately clear: the stuff packed a wallop. Coming up in a slew of different noise outfits (Japanese Karaoke Afterlife Experiment gets particular props on name alone), Schofield caught plaudits turning out scabrous noise as God Willing. LP, his first full-length as Container, was DIY 4×4 designed for squats and shitholes. Gnarled without being ugly, it counterpointed industrial drum programming with low-spec synthwork, and was about as eccentric as techno got in 2011 – a disorderly triumph of Brillo Pad brio.

Schofield’s follow-up for Spectrum Spools, recorded in mono over the September Labour Day Weekend, is less LP‘s sister record than its Siamese twin. Both records have the same name; both have similarly stippled artwork; both run to five tracks; both have track titles that sound like physics modules. Musically, Schofield’s ambit is also just about identical: stannic drums, trails of tape delay and grotty sonics are the order of the day. LP makes Coexist looks like a madcap swerve into the leftfield.

That’s all good, of course. Schofield’s frowzy rave music sounded great a year ago, and anyone who missed LP-the-elder’s mucky charms first time around have an eye-opening half hour in store. Rather than re-reviewing Container’s first record, though, it’s worth probing the subtle distinctions between the two records. I can spot two: one’s a welcome development – and one’s a retrograde shuffle.

LP is marginally less strait-laced than its predecessor. There’s a hitherto unseen touch (only a dab, mind) of funk on display. Album highlight ‘Paralyzed’ centres around a botched breakbeat, with Schofield gradually building up a tangle of polyrhythms as the minutes clock up. ‘Dripping’ is definitely more limber than anything on the first LP, its rhythmic skeleton susceptible to fracture at any moment. Only steroid-enhanced closing cut ‘Refract’ feels locked to the grid, and it makes for the orderliness by furiously self-immolating in the closing minutes.

LP is lither, then – but it’s also slighter. Schofield’s first album had its dinky moments, but there was always that raw percussive force at its heart. To these ears, LP‘s drum sounds are a jot weedier; the general mood is muggier and, correspondingly, less impactful. There’s also less variety on display, with only ‘Refract’ really deviating from the dinning formula. Then there’s the newly prominent vocal samples, sickly gargles that sound like Rumpelstiltskin mumbling in his sleep. Sonically, LP presents a slightly attenuated Container, making for a marginally more pedestrian listen as a result.

It’s worth watching old videos of Schofield performing as God Willing. He’s lank and loose-limbed, hacking away at his guitar with abandon – bucking, writhing, making a mess. Much has been made about the exodus from noise to dance music in the last 18 months, – freedom in restraint, blah, blah – but it’s worth remembering that the best practitioners have made the jump without losing noise’s antic energy. Dominick Fernow’s Vatican Shadow project might have fairly limited parameters, but the lunatic military imagery brings the intensity;  Ital’s rickety house music has enchanted and disappointed in equal measure, but you get the sense he’s testing himself with each release; Pete Swanson’s adventures in techno hit like a fat brick. LP is a fine, rollicking record, with some nice rhythmic twists on the Container formula  – but it’s arguably too controlled, too predictable, to be called a triumph. On the basis of LP, Container could do with bringing some of that former freaky.