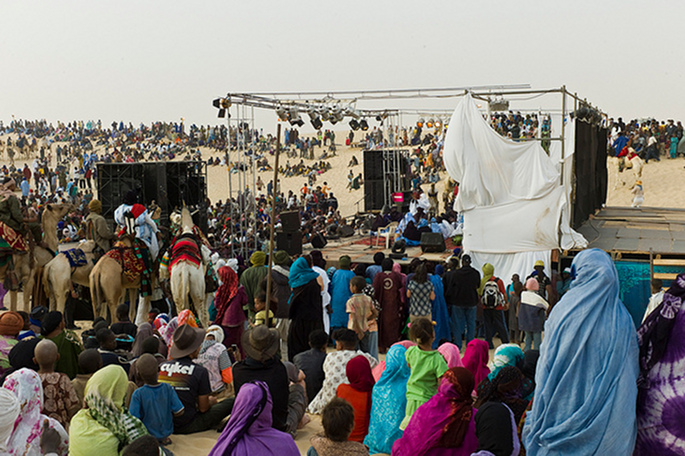 “Tensions were already high when the festival started,” says Hisham Mayet, cofounder of Sublime Frequencies, purveyors of field-recordings, garage jams and radio collages of some of the most far-flung musical traditions in the world.

“Usually the festival is held way outside of Timbuktu, but they had to hold it close to an urban area and surround the whole site with a Malian military garrison.”

Festival au Désert 2012 was at the centre of a brewing geopolitical crisis in northern Mali. Following the fall of Muammar Gaddafi in neighboring Libya, armed Tuareg tribesmen who were loyal to him were arriving into Mali, seeking to carve out their own independent state in the Sahara. Northern Mali was entering a conflict that continues to this day.

Hisham was joined on his trip to Mali by his host Koudede, a singer and guitarist who Sublime Frequencies recorded for the fifth volume of its Guitars from Agadez’series. In Bamako, Mali’s capital, Hisham recorded Koudede for the sixth Guitars from Agadez compilation, producing a record that was to be the musician’s last. He died later that year in a car accident.

Koudede, like Group Inerene and Abdallah Oumbadougou, was a Tuareg, a nomadic and fiercely independent Berber tribe that live in the barren wilderness of northern Mali and Niger, as well as southern Libya. The Tuareg have a long musical history, which is deeply intertwined with, and influenced by, their century-long struggle against French colonialists and the independent African states that followed.

“It goes from being an underground thing to a cultural-export situation…raw and incendiary message becomes smoothed-over.”

Common musical themes include lamenting the loss of a traditional mode of life and protesting against exploitation, misrepresentation and inequality – unchecked, environmentally-destructive uranium mining in their homeland is one of their biggest grievances. These protest songs were fuel for the Tuareg rebellion of the 1990s. A crackdown by oppressive governments in Niger and Mali forced many of them into Libyan refugee camps under the protection of the eccentric and often brutal regime of Gaddafi.

The songs were recorded onto cassette tapes using guitars and amplifiers provided by Gaddafi himself, who was fanning expatriate separatist tendencies against his southern neighbors. These cassettes were traded across the Sahara to the guerrilla fighters, some of whom were musicians themselves. It was also in these camps that the tribe embraced the amplified sound that became the ‘third wave’ of the Tuareg sound. Freewheeling rhythm guitars are turned up high and syncopate in and out of step with one another, creating a warm psychedelic groove. Women ululate. It sounds great.

The tension around 2012’s Festival au Désert was the result of the fall of Gaddafi in neighboring Libya, who after 40 years of rule, was ousted by NATO and murdered by rebels. The strongman had been the patron and protector of the Tuareg, who were attempting to establish a state in the vast deserts of northern Mali and Niger. Some elements of the Tuareg were even forming unlikely alliances with Al-Qaeda in the Islamic Maghreb to forge out an Islamic Caliphate based upon the medieval Arabian society during the time of Prophet Mohammed. It is perhaps partly for musical reasons that the Tuareg soon rejected the Islamists, who towards the end of 2012 were burning instruments and banning music across northern Mali. 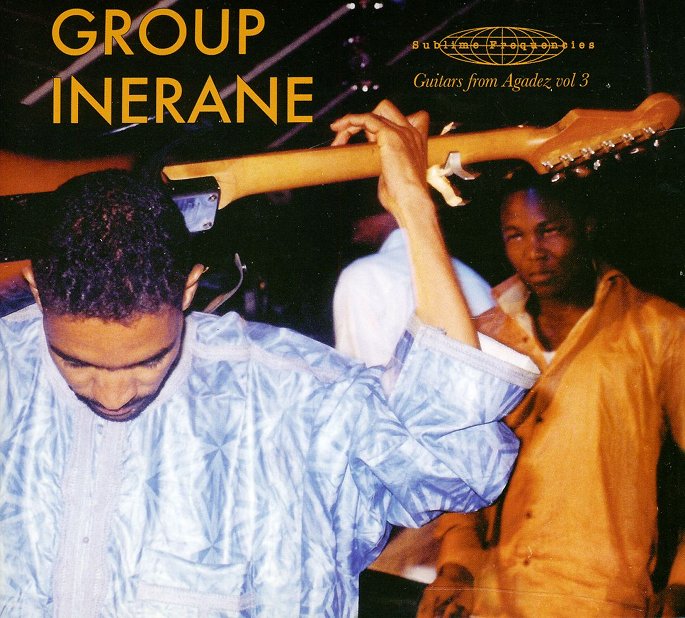 In a region on brink of war, a festival showcasing West African music comprising heavily of Tuareg bands could not have come at a more inauspicious time. Festival au Désert hosted acts including Koudede; Tadalat, another Tuareg band from northern Mali; TInariwen, the biggest and most known Tuareg band , who with their soulful record The Radio Tisdas Sessions, paved the way for their compatriots to follow; and Oumar Konate, a young funk pop guitarist from the Malian town of Gao, who is responsible for this incredible video.

“The Tuareg music from Niger has always had a harder edge than the music that comes out of Mali, which sounds a bit more folky and laid-back in terms of cadence and metre,” says Hisham, “The use of open tuning and modal fretwork that is part of the DNA of the region is passed down through generations of African musicians and over the radio, which is traditionally extremely important in West Africa.”

Sublime Frequencies has successfully scoured the world for unique pop, rock, and traditional music from countries spanning from Cambodia to Morocco. Its music is presented through field recordings, radio collages or archival material stored on long-forgotten tapes. Its names its albums things like Radio Pyongyang: Commie Funk And Agit Pop from the Hermit Kingdom or Ethnic Minority Music of Northwest Xinjiang, China.

“Usually the festival is held way outside of Timbuktu, but they had to hold it close to an urban area and surround the whole site with a Malian military garrison.”

But despite unearthing a huge amount of great music over the past 30 years, Hisham is worried about the future. Once musicians are ‘discovered’, he often finds it sad to see what becomes of them after they are embraced by Western audiences, or as he puts it “commoditized and brought down to their lowest common denominator.”

“It goes from being an underground thing to a cultural-export situation,” he explains, “Once it becomes part of an industry the commoditization of the sound, which is a very normal, almost obligatory part of modern music, the music loses the urgency and the heat that originality made it good. The raw and incendiary message becomes smoothed-over and polished and neatly-packaged for a Western audience.”

But if damaging commoditization is inevitable, why does Sublime Frequencies not instead support the artists throughout their careers to ensure fidelity to their original musical context?

“Sublime Frequencies does not operate as other labels do,” he answers “My job is not to make these artists world famous and milk them out of as much money as I can.  Other labels are very good at doing that and we’ve had some of our artists leave for greener pastures because of that … I’m running a label and that label has an aesthetic and that aesthetic is how I want Sublime Frequencies to be defined and this is why I talk our artists out of going to fancy studios that are run by so-called ‘audio experts’ who are trying to produce a sound that will appeal to the largest possible audience which ultimately will neuter their sound and message.”

“If I do have a job to do it’s to convince them to do what they know how to do rather than to rely upon or impress Western audiences, which is often the biggest battle.”