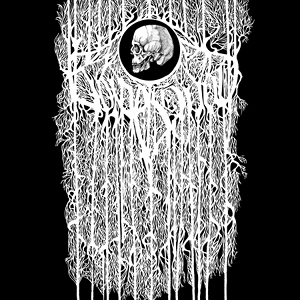 Hallowe’en has come early. Deadboy opens up the gates of his new label Total Fantasy to release a 4-headed EP from unknowns Bøne Squad, the results both spooky (haunting) and Spooky (grimey).

The eponymous Bøne Squad is a veritable tour de force of UK (and one JA) genre reference, but shows an obvious familiarity with the styles beyond that of eager-to-please fanboys. Instead, the group come across like watchful outside observers of the last ten years of British dance music. Each track is a brief reinterpretation, none surpassing 4 minutes, but feel much longer, structures and execution as tight as their influences.

To get a minor grumble out of the way, the decision to feature overt styles – two tracks of grime, one of hardcore and one of dancehall – does seem a little prescribed, and especially so when packed with familiar references. Bashment ‘hey’s, Eski clicks and claps, gunshots, squarewave jungle sirens and dub lasers all feature in the record’s dense sample salvos. However, in context, it all becomes simple, dirty fun, because the crew have another trick up their sleeve

Much like Deadboy’s own inspired Hallowe’en mixes, Bøne Squad have a brilliant understanding of vintage horror score orchestration by the likes of John Carpenter and others. The whole EP is therefore coloured dark and menacing through the use of creepy, billowing synthesizer lines of a similar style, plenty of cavernous reverb and delay only enhancing the effect.

The crew then pair these with less obvious instrumentation that matches the drama. ‘Skål & Bønes’ may be grime, but its melody is shrill bottle-blowing with a Girl Unit-like crystalline countermelody. Ominous, detuned synth harmony and keyboard flute wrap around ‘Valkyrie’’s filtered jungle breaks. Funereal dubstep organ bass, death knell bell and vampire strings trail ‘Vvinter’’s Wiley-cello riff. ‘Danskhall’ has memories of jungle in its bongos, wind whipping around heartbeat kick-filtering, plus Shockout-like pitched-down shouts from a soundsystem MC.

With the cover art in mind, it all makes complete sense; tapping into a doomy atmosphere and visual aesthetic that aligns itself with Scandinavian black metal, Bøne Squad have picked up on a complimentary palette of sounds to established club music and taken the whole lot off somewhere far weirder. It will be interesting to hear these pop up in DJs’ sets, and where the crew will take their sound next. As there is plenty of imagination and potential to push this sound further into the original territory it’s exploring, I hope that the horror wins out.

Until then, Bøne Squad is impeccably produced and well-realised, having all the energy of a Butterz production, but with a decent splattering of schlock too.