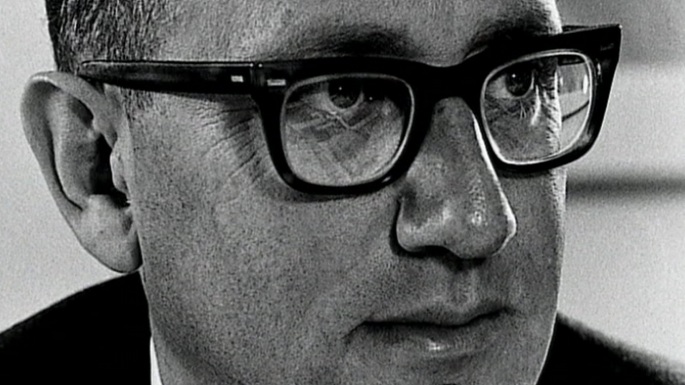 From 2003-2008, FACT operated as a bi-monthly print magazine. As part of our From The Archives feature, and to tie in with out 10th birthday celebrations, we’ve uploaded a cache of vintage articles from FACT’s ink-and-paper days. Below is Mark Blacklock’s account of oddball delight ‘Henry Kissinger War Criminal’, originally published in 2003.

“There’s a strange kind of person standing speaking to me, at the end of my bed”, incants a throaty voice. “Do you know who that is? IT’S A FUCKING GHOST, PRETENDING SHE’S THE DEVIL’S DAUGHTER.”

Thunderous sound effects rumble forebodingly. The crowd trades increasingly frantic calls of “are you okay?”. That voice again: “Welcome to the house of Satan.” Then comes a truly appalling attempt to read the Lord’s Prayer – backwards.

No, it’s not a meeting of the Slough branch of the Freemasons, but rather a 7-inch record called ‘Henry Kissinger War Criminal, released by UK label Irritant. Specialising in fuck-off, splatter core electronics and home to artists like Kid606 favourites knifehandchop and upcoming US radio DJ Donna Summer, for the past four years Irritant has pumped out unpredictable, gabber/cut-up/punk 7-inch records that are guaranteed to be as twisted as they are catchy. ‘Henry Kissinger War Criminal’, however, was nothing short of a revelation.

This was the opening track on the ‘Henry Kissinger…’ 7-inch entitled ‘They Call Him King’ *by VzR). As the unintentionally hilarious cod-Satanism plunged new depths of evil it became apparent that ‘…king’ contained no music, it was purely absurd front man. When the singer announced the band as Merciful Fate though, everything began to fall into place. VzR had taken live recordings of the (still extant) ’80s metal outfit, fronted by Norwegian-born Kim Bendix, a.k.a. King Diamond, and removed all the music to leave just the onstage banter. And fuck, was it potent.

Excised from context, the risable stage persona of King Diamond was cast into sharp relief. He sounded like a Nordic version of Otto from the Simpsons, a metal caricature, spraying occult cliches at the crowd with wanton disregard for credulity. Here was a performer who could truly bring the God-fearing crowd to its knees with his inane posturing. I could only assume that removing the musical impedimenta vastly improved upon the original gig. My god, I thought to myself, there are so many bands I could actually enjoy listening to this way.

I immediately set about searching for more recordings like this. All those thousands of concerts… I needed more.

“He sounded like a Nordic version of Otto from the Simpsons, a metal caricature, spraying occult cliches at the crowd with wanton disregard for credulity.”

I found clues here and there, leads to CDs which contained teasing snippets of concert banter. An inquiry to a mailing list was responded to by Brian Taylor, a DJ on New Jersey radio station WFMU. To raise money for his show (called Shut Up and Play) Brian had compiled a CD of “between-song banter and questionable moments captured on stage.”

Brian sent over a copy of his CD and recommended a 12-inch called ‘Black Sabbath Riot’, which was reproduced on his disc. This recording of a Sabbath gig (which had deteriorated when Geezer Butler was hit by a bottle thrown by someone in the crowd and refused to play) had entered the live recording lexicon of legend. Lary 7 and Khan produced ‘Black Sabbath Riot’, but when the CD arrived from Brian one track stood out.

“You heard some rumours out here that Venom have packed in, yes? Venom are supposed to have finished. Well we’re recording a fucking new album now. And it’s a little bit different to say the least. So we’re gonna do a track for you now off the new album. This is a track called ‘The Charming of the Priests!’.

I sensed a pattern emerging, and contacted Irritant records immediately. “The Henry Kissinger track was inspired by a 7-inch put out around 1989 on the Ecstatic Peace label run by Thurston Moore from Sonic Youth”, revealed Andy Irritant.

“I’ll be honest with you, I don’t know of any other recordings like this apart from the ‘Venom’ one and ‘Henry Kissinger War Criminal’. We did a couple more, ‘Testament’ and ‘Slayer’, but they don’t have the majesty of King Diamond so nothing will be done with them. I’ve never seen a copy in any shop, new or used. I don’t think it was ever re-pressed, either.”

Another inquiry to a small video label, Gravedigger, whose head honcho Robert Plante had assembled tapes similar to Brian Turner’s CDs, confirmed the Moore story and added a bit more info. It turns out that the recording had actually been made by Joe Cole – a great friend of Black Flag’s Henry Rollins who had been killed when members of a California gang attacked him and Rollins.

There was nothing more for it but to contact Thurston Moore. All roads were leading back to the Sonic Youth man. He would be able to clear everything up.

“That record is the jewel in my record production crown”, enthused an obviously proud Thurston when I tracked him down to his New York home.

“It disappeared, it sold out. And through the years I’ve had people getting on their hands and knees and begging me for a copy of this record.”

“Black Flag were on tour at the time and a good friend of mine was working with Henry Rollins, a feller named Joe Cole. It just so happened that Black Flag got this gig opening for Venom at City Gardens, in Newark, New Jersey, a grotty cement black of a club that use to play host to heavy metal. The club had taken upon itself to have some punk rock and hardcore bands as well because it was in the middle of nowhere in the wasteland of New Jersey.”

“At the time Venom were being presented in the hipster punk rock underground as a metal band you could embrace. They were the kingpins of underground metal to punk rockers at that time.” “It was a fantastic gig, Black Flag and Venom. It was ridiculous. The crowd was a mix of underground heavy metal kids, a breed that was pretty close to Spinal Tap, and punk rockers.”

“Joe Cole had made a tape of the concert and he made me a copy of it with just Kronos (front man of Venom) talking. I was astounded It captured something that was completely mid-bending. There was a vibe that Kronos was going against with this split audience that was kind of encouraging him but at the same time completely bemused and jeering at him. And the cultural divide, Venom being really proud of their roots – aren’t they from Nottingham? – and drinking this ale, and promoting it, Newcastle Brown Ale. And the audience having no idea what they’re talking about – who cares what Venom drink?

“To me it was as good as any heavy metal, hard rock gig. It really captured what people liked about that kind of music. It was preposterous! You know, a kind of absurdity. And I really loved it. The fact that they’e called names like Kronos and singing about the gutting of priests, really play-acting on stage. And punk rockers were really steeped in realism – there was this straight clash of cultures.”

“We had this cheap, fold over Xerox sleeve and we made 500 copies. And we thought that maybe we would sell a hundred or two but of course as soon as word got out about how insane this record was… And I was just passing them out. One of the first people I passed one to was Mike D of the Beastie Boys, and they sampled it on ‘Check Your Head’, where you hear one sample of Kronos going: “you wild man, you wild.”

“It disappeared, it sold out. And through the years I’ve had people getting on their hands and knees and begging me for a copy of this record.”

At last I was at the bottom of it, the truth about this strange little backwater of live concert cut-ups, these little slices of bootlegged bootlegs. The Thurston had one more thing to say which filled me with joy.

“I plan on reissuing it (sometime this summer). Before Joe Cole died he was so proud of that record that he’d done another one. He’d gone to see Public Enemy at City Gardens. And the Public Enemy recording that he did was amazing. The sound system isn’t working. So Professor Griff comes out on stage with the S1Ws, and at the time Professor Griff was getting a lot of heat for being racist. You hear them come on stage and you hear Terminator X trying to get his turntables going. And the sound is really thin, you can’t hear the beats – there’s just this thin noise. And Professor Griff is truing to get the audience going, and he’s just spieling.

Tags: FACT at 10From the archive