“Who decided that a rap-rock comeback was OK?”: Initial thoughts on Eminem’s bizarre Marshall Mathers LP 2 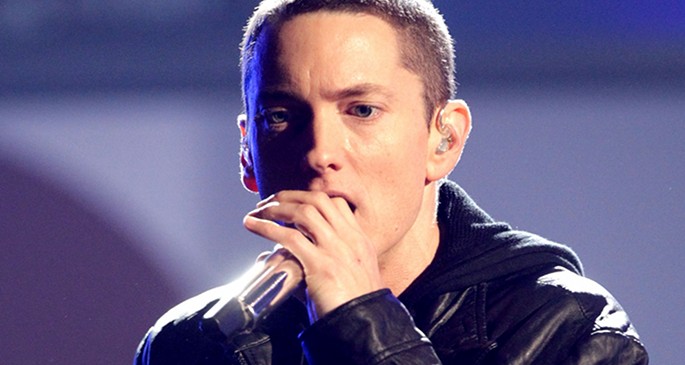 The eighth album of the Detroit rapper’s career, it doesn’t just look to Eminem’s classic Marshall Mathers LP, but to Em’s place in hip-hop’s current climate. He knows he can sell, and it’s arguable that his influence is the greatest its been in some time – Tyler, the Creator and Kendrick Lamar (who appears on MMLP2) are just two prominent artists clearly inspired by Em – but can he still compete with rappers 20 years younger than him? It’s something that’s clearly on Eminem’s mind throughout MMLP2, and after an initial couple of listens by a selection of FACT’s staff, here are our early thoughts on the album – accompanied by some of the MMLP2 lyrics that seem to summarise it best.

“Now this shit’s about to kick off, this party looks wack / Let’s take it back to straight hip-hop and start it from scratch”

Throughout the album Em moans about the loss of real hip-hop as if it’s still the ’90s and he’s got a worn out backpack permanently strapped to his back. Sadly, he experiences the same pitfalls as, well, everybody did back then – talking about the fact that nobody makes good hip-hop does not a great hip-hop track make. If MMLP 2 was supposed to be an old school block party, it’s a damn dour one.

“Let me remind you of what got me this far, picture me quitting / Now draw a circle around it and put a line through it, slut”

At several points during the album, Eminem is as lucid and self-aware as he’s ever been when evaluating his persona, his career, and his place in rap history. The entire fourth verse of album opener ‘Bad Guy’ lays it out: how his misogyny and homophobia has turned him into the type of bully he grew up hating, how his time in the spotlight is running short, and how dangerously close a 40-year-old Slim Shady is to being the “laughing stock of rap”… at which point he launches into an album drenched in the venom of his past without any of his early album quality control. He claims that he’s a “borderline genius who’s bored of his lines” — if he doesn’t care, how can we?

Eminem has said that MMLP 2 is “not necessarily a sequel, as much as it is a revisitation… it’s more about the nostalgia.” Em has certainly been listening to the records on his wall: throughout the LP, there are nods to songs, enemies, and controversies of the past. Not only is ‘Bad Guy’ a thematic sequel to ‘Stan’, but ‘Legacy’ borrows the song’s melody and Dido-in-the-rain vibe. Along with countless lyrical rehashes, there’s even a meta-discussion of the Columbine-referencing lyrics of MMLP’s ‘I’m Back’ that were censored even on the album’s explicit version. Eminem clearly hasn’t forgotten about the first Marshall Mathers LP, and he’s hoping that his listeners haven’t either. 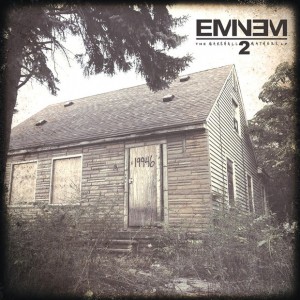 “We’re gonna rock this house until we knock it down”

On one hand, it’s refreshing that MMLP2‘s stadium-fillers are more rap-rock than they are the usual EDM fare – but on the other, who decided that a rap-rock comeback was OK? ‘Berserk’ is more Kid Rock than King of Rock, ‘So Far…’ sits firmly in the unholy lineage of MTV fuckboy anthems like ‘Heaven is a Halfpipe’ and ‘My Own Worst Enemy’, and ‘Legacy”s point horror piano is straight out the Evanescence playbook. Oh, and the scratching – did we learn nothing from DJ Lethal, people? If we wanted to remember the Offspring, we’d just dig out Ignition.

“Stuck in the past, iPod, what the fuck is that?”

As if Em’s rap-rock flirtations weren’t suspect enough, MMLP 2 is also bogged down by a series of questionable samples and interpolations. ‘Rhyme or Reason’ finds the rapper singing along with The Zombies’ 1968 psychedelic classic ‘Time of the Season’, and on ‘Love Game’ he trades verses with Kendrick Lamar over a beat based on the sunny 1965 hit ‘Game of Love’. The low point, by far, is ‘So Far…’ which sees Eminem channel his inner Joe Walsh on a putrid reworking of ‘Life’s Been Good’; his off-key singing and sub-Kid Rock chorus make the Billy Squier and Beastie Boys samples on ‘Berzerk’ seem absolutely vital.

“Back with the Yoda of rap in a spasm”

Em promised on Recovery that the Relapse days of silly voices were over (“Perhaps I ran them accents into the ground / Relax, I ain’t going back to that now”), but whaddaya know, within a few minutes of MMLP 2 we’re treated to an embarrassing Yoda impression that sounds worryingly like an aging relative after a few too many glasses of punch. It wasn’t flattering back then, but somehow it’s actually even worse now – Jar-Jar Binks would have been the more appropriate reference.

He’s right, the supposed enemies of his past have grown old and drifted far away from his glare, and there’s a sense that Em’s not really engaged enough to bother finding new targets for his vitriol. He’s a rapper that thrives on beef, and without anybody to scream at (subtle digs at Future and Drake don’t count) he just sounds castrated – he knows he needs something, and it feels, frankly, like he can’t be bothered to find it.

“You fake lying slut you never told me you knew Dre”

Eminem is 41. Old enough, you’d think, to have reconciled some of the issues that featured on his early albums, but no. Women are the enemy and can’t be trusted – apart from his mum, who finally, two decades into Em’s rap career, gets a free pass – fags are there to be pointed at and used as punchline material, and when you combine the two, on ‘So Much Better’, you’re left with “la-la-la-lesbian / I hope you hear this song and go into a cardiac arrest.”

A pair of joyless albums by fading rappers – you might think that MMLP2 and Jay-Z’s Magna Carta Holy Grail have a lot in common, but in actual fact they’re pretty different. MMLP2 is the sound of an over-the-hill star trying to prove himself one last time, grasping for sources of inspiration that are no longer there, while on Magna Carta, Jay simply doesn’t have any desire to prove himself, and his inspiration comes from the boring, material subjects that now make up his life. What’s worse? That’s up for debate, but MMLP2 certainly seems the more tiring listen.