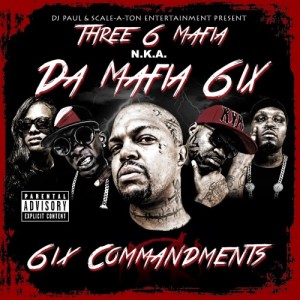 It’s odd somehow that Three 6 Mafia, despite their successes have managed to just stay just a hair shy of superstardom. They pre-empted the worldwide obsession with trap by a couple of decades, but seemed to stall after the innovative but ultimately patchy Last 2 Walk back in 2008. Their follow-up album Laws of Power was canned, even after the mildly successful (and remarkably prescient) Tiesto collaboration ‘Feel It’, and since then founder members DJ Paul and Juicy J (who have long been the sprawling collective’s core) have drifted apart. Juicy discovered that with some well engineered chants and a selection of tough productions from Lex Luger he remodel himself as a lean-chugging, pill-munching frat house legend, and Paul decided to pursue his other dream: barbeque sauce.

Cut to 2013, and Juicy J’s a bona fide solo star, regularly performing in front of large audiences, many of whom will be hearing Three 6 Mafia’s iconic ‘Sippin’ On Some Syrup’ for the very first time. He’s finally made it, and there’s very little incentive right now for him to attempt to rebuild a career with his old gang again. Thankfully this didn’t stop DJ Paul from digging out the phone book and getting most of the band back together. On 6ix Commandments he’s managed, inexplicably, to settle the notorious old scores and piece together a re-energized group from some of Hypnotize Minds’ most compelling voices – Crunchy Black, Gangsta Boo, Koopsta Knicca and Lord Infamous. That’s not even getting started on the features spots, with Southern legends 8Ball and MJG, Yelawolf (who puts in a surprisingly restrained turn) and most surprisingly ex-rivals Bone, Thugs-n-Harmony turning up to pay their respects.

It’s a veritable who’s who of the era, serving as a solid introduction for new fans and a reassuring pat on the back for those of us who still leaf through our old 12”s on the regular. There’s little of Last 2 Walk’s hybridized neon pop here and Good Charlotte are thankfully absent; instead Paul takes us back to the gruesome near-horrorcore grind of Triple 6’s stone-cold-classics Mystic Stylez and The End. It works too, and while the rappers might not have the same spark as they used to, they capture the era undeniably better than the seemingly unending line of markedly younger third wavers. Funnily enough, Triple 6 acolyte Spaceghostpurrp actually crops up on ‘Murder On My Mind’, which we can only assume happened shortly after Santa had finally leafed through the steadily growing sack of desperate messages, and the result is oddly touching.

Even Juicy J can’t resist Paul and co’s magnetic Memphis pull – he might have declined the offer of being a full-timer, but it’s refreshing to hear his voice even just for a minute, on album highlight (and umpteenth sequel to The End’s track of the same name) ‘Body Parts’. Whether this was recorded just for the track or was reclaimed from Paul’s no-doubt impressive archives it hardly matters – it feels like the jubilant, well-deserved victory lap the posse were never really granted.

They might have a new name and they might be (for the most part) lacking their biggest star, but it’s telling how quickly the initial cynicism vanishes in light of the fact that Da Mafia 6ix have emerged with a genuinely enjoyable addition to the Three 6 Mafia canon. There’s even a good argument for the fact that 6ix Commandments is actually more successful than Juicy’s big-league excursion Stay Trippy – who needs Wiz Khalifa, Wale and Chris Brown anyway?