House party 101: the best free DJ software on the web

New Year’s Eve is approaching – and, with it, a thousand awkwardly choreographed YouTube mix sets in cramped front rooms.

As you’ll likely know by now, we love talking – and writing – about hardware, from fanciful controller prototypes to outboard steals to Neil Landstrumm’s armoury of kit. However, we’re mindful that plenty of you don’t have a set of decks, let alone an extravagant Serato system: for every reader with a stacked record box and some natty MASCHINE kit, there’s another who’s perfectly happy syncing up YouTube rips between chirpsing sorties and glugs of Corona. Which is, of course, absolutely fine by us.

With New Year’s Eve driving ever closer, we’ve decided to do something for those amateurs and hobbyists planning to ring in 2014 with a cheap’n’cheerful house party set. The following is a rundown of our favourite freebie mixing software: Soundcloud decks, mp3 mixers, YouTube cross-faders, and a smattering of extra goodies too. Whether it’s funds, inclination or space that have kept you away from Proper Mixing, the below should help you cobble together a set that’s up there with your UFOs and your EZs. Sort of. 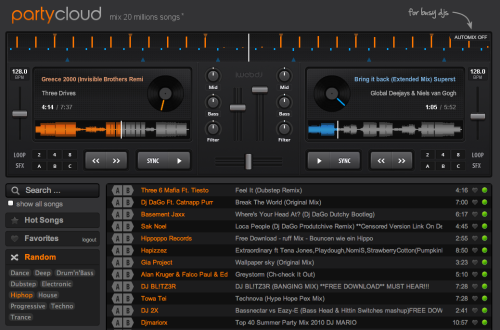 The well-heeled Daddy of the Soundcloud mix interfaces. Boasts an easy-to-use (if admittedly ropey) BPM control, simple looping toggles, idiotproof cueing, and an Automix feature for the hopeless and the feckless. Plus, unlike many of its competitors, Partycloud doesn’t look like it’s been art directed by the same people that design shoddy room escape games. 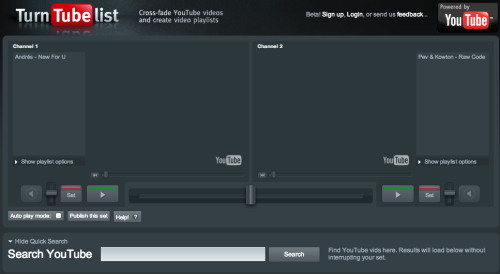 Amidst a sea of essentially identical YouTube crossfader tools, this is the only one that’s been put together with a modicum of care or flair. Unlike other fiddly sites, videos can be locked in using a simple playlist bar. No-frills, but the best way of avoiding having to leapfrog from window to window. Nice self-deprecating FAQ, too (“‘The crowd’ will most likely be your roommates”, etc.)

BPM Counter allows you to bash out a pulse, Hungry Hungry Hippos-style, with the spacebar, which then determines the BPM. It’s a blunt old instrument, but, in its own humble way, definitely preferable to trudging through Beatport with 90 seconds to go until your tool conks out. Sure to get charalatan DJs’ heart rates rising – and then they can measure them, too. Avoid all imitators, incidentally; BeatsPerMinute looks prettier, but is much wobblier in practice. 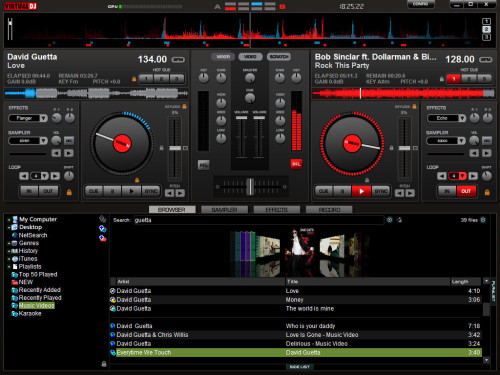 Desktop mixing software VirtualDJ isn’t exactly a market leader – “the hottest AUDIO and VIDEO mixing software, targeting DJs from the bedroom, mobile, and professional superstars like Carl Cox”, the rather grotty website desperately trumpets – but the free version is definitely worth a download . You’re limited to four decks (as opposed to the 99 available in the full version) and functionality is restricted, but, for the most part, it’s well presented and highly serviceable mix kit, available gratis.

Another Soundcloud mixer. Although pretty impoverished in just about every regard compared to Partycloud, Wheels Of Steel does boast some big chunky slipmats to scratch with. Obviously, not being able to cue makes this about as useful as an ashtray on a motorbike – but it’s a nice, gem-encrusted ashtray all the same. 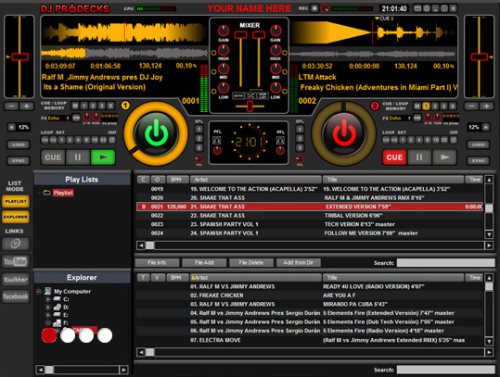 Unfussy, guileless freebie DJ software for Windows. Yes, the interface looks like it’s been cobbled together with Microsoft Paint and Pritt Stick, but the features – the capacity to record mixes, good effects provision, proper beat detection, etc. – confirm the old grower-not-a-shower adage. If you’ve resisted the glowing apple thus far, this is a decent port of call. 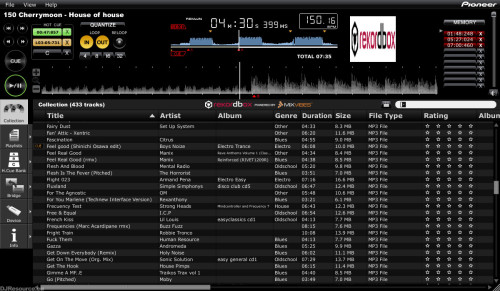 The self-styled “iTunes of DJs”, Pioneer’s free-to-download rekordbox software is a sweet check-up tool for DJs – a one-stop-shop that allows you to log and adjust BPMs, organise mp3 files, plot cue and loop points, and build playlists. Although optimised for direct input into a Pioneer CDJ, it’s a neat go-to for anyone looking to corral a playlist into some some sort of order. 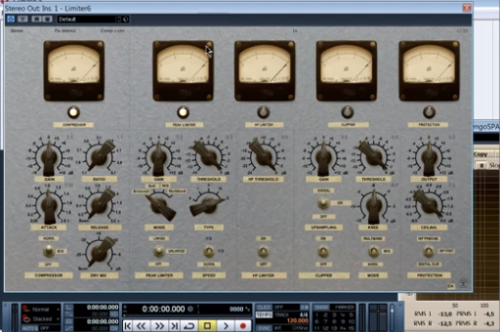 Excellent free limiter plug-in, with RMS compressor, peak limiter, high-frequency limiter, clipper, true peak limiter. If that’s all Greek to you, probably worth steering clear; if it’s not, you’ll do well to cop this, stet. 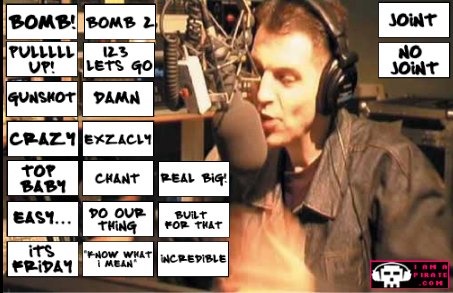 Because you can’t spell party without a par.