Party at the end of the world: an interview with Fat White Family 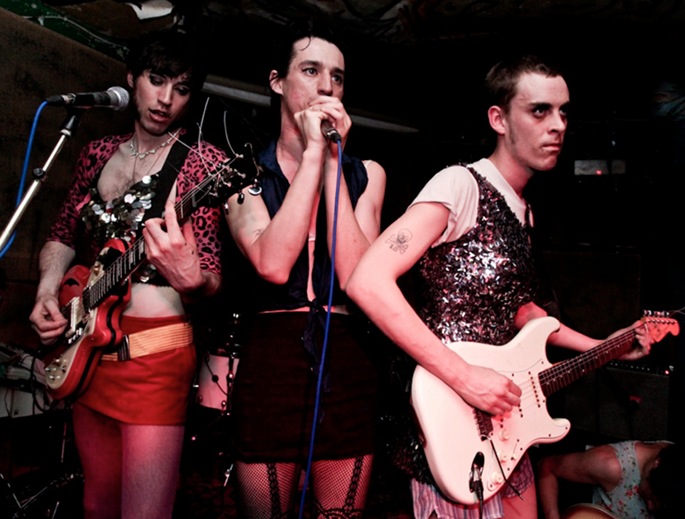 Almost all the ink that has been spilled over Fat White Family trots out how these “sick” and “troubled” boys “crawled out of the squats of South London – an apparent Wild West at the end of the Victoria line – and on to the stage.

But such trite labels seem insufficient for the band FACT interviewed in the cavernous attic above the stage on which they were about to play a wild sold-out show at the Electrowerkz club.

Though the Fat Whites do shout, spit, use fascist and communist imagery and play shows for the most part unattired – and often surrounded by pigs’ heads on sticks – they are also responsible for some of the most refreshingly provocative guitar music Britain has heard for a long while.

“Instead of talking about what the music is all about, they’ll bang on about aesthetics, how we do drugs, how we’re crazy, how we sweat a lot,” explains frontman Lias Saoudi in an Ayrshire lilt. “It’s kind of silly. If we’re the scariest band out there at the moment, it’s a truly tame time.”

Their debut album Champagne Holocaust sat freely-available online for almost a year before generating attention when Ben Wallers of the Country Teasers started making noise about them and the album made The Quietus’ number-five album of 2013. 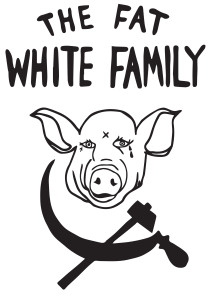 The day Thatcher died, the band were immortalised on the front of The Independent newspaper, sat in the window of their squat above a Brixton pub holding a placard reading ‘The Witch is Dead’. On another occasion they occupied a south-London branch of Foxtons estate agents, baring a luminous-pink flag that read ‘Yuppies Out’. Another read: ‘Homes for all!’.

“Because of our approach to these things, it’s always going be tongue-in-cheek. We’re never going to take one side totally,” explains Lias. “We’ve been slated by the Left for not talking the causes seriously enough and from the Right for obvious reasons.  So we’ve just become these idiots walking around South London without a pot to piss in singing songs about bombing Disneyland.”

Fat White Family are Thatcher’s grandchildren – the sons and daughters of Thatcher’s children. They are have-nots who are pissed off at being flat broke and at what they see as a stultifying corporatisation to modern life. To many in 21st century Britain, the days of overtly political music are over, but not for Lias and his co-songwriter Saul Adamczewski, who is an admirer of 1990s post-punk outfit The Make-Up for their mischievous and iconoclastic use of religion and politics.

“I don’t see how anything isn’t political. Having a cup of tea is political,” Lias says “I try and use things I creatively or aesthetically in a situationist philosophy so people can draw whatever you want from it. We’re not telling people what to think, were just trying to ask questions and open up a debate.”

Situationism was an artistic and also a political revolutionary theory that grew out of the Parisian avant-garde of the post-war years that aimed to wake people up using spectacles – or in the Fat White’s case, gigs – and liberate them with direct human experiences.

“I love the idea of revolutionary madness,” he says, grinning widely to reveal a gaping hole where his incisor once was. “I don’t think there is any salvation. I think we can agree on one thing and that is everything is doomed. It’s like the party at the end of the world. There’s fuck all left to do. We’re just rejoicing before the curtain comes down.”