Acid, aliens and no bald phalanges: Joe Muggs does Coachella 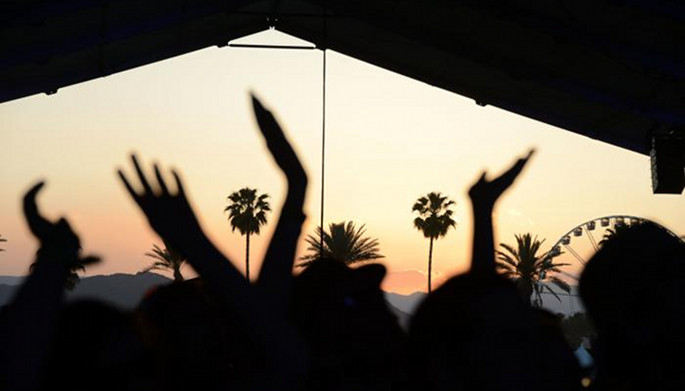 I didn’t know what to expect from my one-day visit to Coachella.

In fact, not having been there before, I didn’t know what to expect from California full stop. I was fairly sure that most of the stereotypes were just that: I certainly didn’t think the place would be full of surf dudes and Valley girls, and it was so screamingly obvious that that Jimmy Kimmel “get people at Coachella enthusing about non-existent bands” from last year was a stitch-up that I wasn’t buying into the “clueless hipster” meme either. That said, if I’m honest, I probably had been indoctrinated enough by viral videos from this year’s Ultra Music Festival in Miami that I was fully expecting to see a few candy raver casualties around the place doing grimly YouTube-able things to each other.

As it happened, there were none of the latter at all. Yes, there were some candy kids dotted here and there, hugging speakers, giving each other massages and mini lightshows with finger lasers, that kind of thing. But they were distinctly failing to hump trees, urinate on one another, or snort lines off each others’ bald phalanges. In fact, there were no casualties at all that I could see. Despite the facts that the desert dust was blowing into everything, that strong weed was absolutely everywhere, that the bars were doing a roaring trade and that I’m pretty sure all sorts of other stuff was being consumed – one fellow Englishman had acid pressed on him by the people he shared a lift with from LA – these people knew what they were doing.

And that applied to the music, too – much as we’d love to convince ourselves that US ravers are essentially ghastly arrivistes who just don’t get it, every time I passed through a tent with a dance act playing in it, people were giving it loads in a style pretty much indistinguishable from anywhere else in the world. There was one darkened disco tent and an area surrounded by great sci-fi giant mushrooms, and in each of these a nicely varied bunch of party people was dancing – like actual good dance moves – to the likes of Cajmere, Justin Martin and Aeroplane. In fact, the atmosphere in Cajmere’s set was so good I got stuck in there for a good hour.

Meanwhile, in the walloping great Sahara tent where Skrillex was headlining, people wearing very small clothes in very bright colours were doing funny stompy and shuffly dances to thumping great electro-house tunes, played by utterly anonymous men with three-letter-abbreviation names. Thousands of them were packed in tight in the middle, while circles formed around the edge where they could egg each other on to more outré stomping and shuffling. But qualitatively, this really was no different to any hard house or trance rave anywhere in the world in the last 15-20 years, just with bigger, bolder, bassier music and more samples of rappers going “drop it, work it, twerk it, bounce it”.

“Far from the caricature EDM hype-fest of zombie hordes being led by the nose into some monstrous corporate shitfest, it was just good old fashioned big, dumb, inclusive fun.”

Even in the brosteppier bits – when RL Grime played his techstep-dubstep on one of the indie stages, for example, or for Skrillex’s alien overlord sensory barrage set – the crowds were hardly “bro” at all, rather a very varied mix of hard nuts, dweebs, dressed up and dressed down, boys, girls, gay, straight all sorts… again, much like any rave anywhere. (Admittedly there weren’t very many black people, even though a huge proportion of the crowd were Latino and Asian – a segregation I’d noticed in LA too, dramatically more so than in London… but that’s another, bigger, issue for another time). Overall, far from the caricature EDM hype-fest of zombie hordes being led by the nose into some monstrous corporate shitfest where the music is calculatedly pissing on the ideals of the underground, it was just good old fashioned big, dumb, inclusive fun.

I saw other stuff at the festival too: Pixies (deeply depressing to see people trying and failing to enjoy the new songs), Mogwai (awesome as ever, even to a smallish crowd), Solange (I’m in love – people watching the live stream said her cover of Kate Bush’s ‘Cloudbusting’ was full of bum notes, but that didn’t come over in the tent at all), Bombay Bicycle Club (I’d never have thought they’d be so uplifting in the flesh), a brief glimpse of Pharrell (he truly is Mister Entertainment), Queens Of The Stone Age (I realise it’s not a popular viewpoint but though I could listen to their riffs for ever, they don’t really have any songs, do they?) – but it was the dance music, and in particular the dance music crowds that stuck with me.

Yes, there is without question a bubble – or is it a boil? – rapidly inflating at the top dollar end of the dance music industry that bears striking resemblance to the superstar DJ culture of the late 1990s only even bigger, brasher and more Vegas-ified, and it’ll be grotesquely fun to watch it burst. But the party people at Coachella really brought home to me how established and well-incorporated dance culture as we’ve always known it now is into all levels of the US music world. That comes with all its own problems, and can lead to the best of times and the worst of times – often in the course of the same night – but from first hand experience I now feel strongly that there is now a broad, solid base for some interesting future developments. Yeah, I know, that’s quite a bit more boring than standard “LOL EDM” received wisdom, but what can you do?