The month in house and techno: April 2014 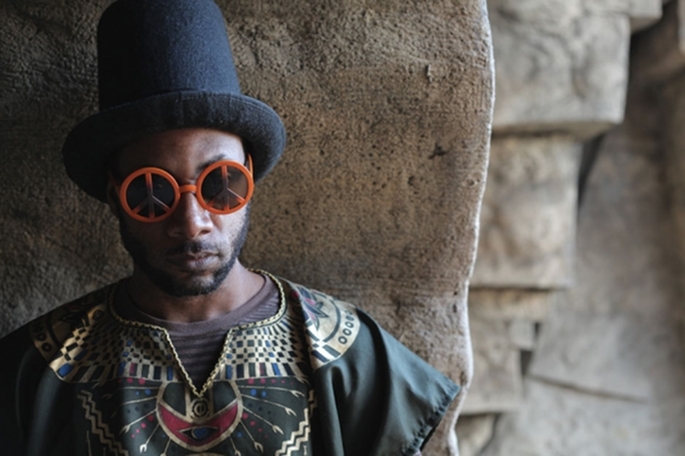 OK, I’m lying; of course he released a record, but only one, and it came on his own Harmonie Park label. As anyone who checks new releases regularly will know, Wade is nothing short of a one-man track making factory who, for the last twenty years, has basically been doing the same tracky house trick over and over. Which raises an interesting question: is that enough to warrant attention, fans and fawning over on a regular basis? For him, it seems so (or else labels would surely stop buying up his tracks so regularly) but for many it seems there comes a point where people grow bored of a producer’s unique sonic identity and expect something new.

This issue was brought to light when irrepressible Dutch producer Legowelt released his latest LP, Crystal Cult 2080, earlier in the month. For many it was classic Legowelt and a great release, but for some it was just another album of the same stuff we have come to expect from the man, and do we really need more of that given his sizeable canon to date? Who knows, but what we definitely do need is his new EP on DC label PPU. Entitled Los Alamos Motel, it offers some of his most notable work in ages: ‘Puzzles in Life’ is mystic house at its finest and most pithy, ‘Videophone to Space’ is like a direct line to the outer regions of our galaxy, and ‘Cruise Til The Sun Shines’ makes you want to break up with your girlfriend just ‘cause it’s so perfect for crying to. The title track closes things out in more upbeat style, with sci-fi deep house sonics so achingly evocative that they will melt even the most stonehearted barbarian.

Authenticity is another key issue in house music. Would you admit to being more likely to check a promo or new release marked Detroit/Chicago than, say, if it were from a new UK label or producer? For my sins, I certainly would, and it is for that reason that UK producers often have to work a lot harder to get their dues than American counterparts. Take Sound Signature and Wild Oates young gun Jay Daniel, for example. Off the back of just two EPs, he already enjoys a higher profile than many a producer ever will, even though his music might not necessarily be that much better than the next man’s. Take Flori, for example – over the last couple of years he has developed into one of the UK’s most considered and idiosyncratic house producers with hardly any fan fair at all. For evidence, just check Within Reason, his new three tracker on Secretsundaze, which veers from thumping and writhing to deep and paranoid to tripped out and mischievously nocturnal, all without paying any heed to the usual classicist American tropes which seem to define most ‘new’ house releases.

Said tropes are in full effect on the month’s next best, The Black 3 EP, a new release from Chicago producer Brian Harden – about whom, incidentally, Actress recently tweeted “[he’s the] best Chicago producer”. Harden, who has been active since the mid ’90s on Strictly Jaz Unit and Moods & Grooves, turns up on the excellently named D3 Elements label (that’s not Dee Three, but “Deh Trois” – as in the French for Detroit – because the label is run by Frenchman, Vibes & Peppers boss and house historian Bryan Hervieu.) The three cuts offered up are laden with golden chords, light-fingered percussive hits and beautifully elongated, elastic basslines that invite you right in to their gooey cores.

Much less warm and organic is the latest transmission from Seven Davis Jr, a fast rising newbie breaking out from the production shadows cast by the hip hop acts he has worked with the past, out into his own limelight. His debut release, One, proved modern vocal house can reach the highs of Robert Owens gems from days gone by, but this new one is much more rough and ready. Available on Funkineven’s grimy and grubby Apron outlet, P.A.R.T.Y. offers fizzing and loopy jams run through with sinewy synths, and knackered, off-the-cuff house sketches; everything here sounds lovably imperfect. Clearly a producer with a ton of ideas and the skills to pull them off, Seven Davis Jr looks sure to keep us guessing.

The eagle-eyed amongst you will have spotted the first release from Dnaut made the March ‘Best of the Rest…’ list. Well, this month the new and mysterious Detroit label released its second EP – and a delightful affair it is too. Craig Sherrad is the man behind Sketches of a Circuit, and is someone who has worked on labels like Transmat before now. Though brief (and decidedly, um, sketchy), there is lots to love here thanks to the spacious and atmospheric synth patterns, gloopy basslines and lazily broken beats. There’s an assuredness to each track, too, that belies Sherrad’s many years of experience: rather than kowtowing to the norm, he is competently playful and offbeat throughout.

Nowadays, there are very few parties who have a real community feel; very few parties who have their niche and stick to it rather than just inviting the day’s most hyped DJs to play. One of the prime examples of a close-knit (but friendly, not arsey) community-led party is London’s Toi Toi. Their sonic remit is decidedly minimalistic and synthetic, and just this month– as is everyone’s wont nowadays – they started an eponymous label. It kicks off with an EP from regular guest MR G, but the first techno pick of the month is an EP by Claus Voigtmann, Toi Toi co-founder, who pops up on the fledgling Yumé label with The Interlude Archives. His originals, ‘Fingerpointing’ and ‘The Good Ones’, are dubbed out tech funk with plenty of narcotic tendencies that will keep you dancing long into the night, but stealing the limelight on rare remix duty is fabric boss man and Toi Toi regular Craig Richards. His two revisions are typically weird and kinetic – engagingly rhythmic things that are wobbly, wonky and knowingly abstract. Few do seductive slink like this man.

Berlin based DJ Richard’s Nailed to the Floor EP on his own White Material actually came out a month or so ago but is well worth some belated attention. His cult label has had plenty of that in the last twelve months or so, with most of the releases to date (from the likes of Young Male and Galcher Lustwerk) being pretty much only available on Discogs for hugely inflated prices. This latest one marries jarring rave loops to firmly rooted kick drums; unhinged found sounds – broken glass, raucous shouting and bust piano notes – to sleazy ghetto rhythms; and barrelling old school techno to surprisingly sensitive chord stabs.

Lab.our Music is another label established in 2013, this time in the unlikely warehouse techno hotbed that is Toronto, home to a nice collective of labels and producers including Basic Soul Unit (Lab.our boss man alongside Jason Ulrich), New Kanada, Adam Marshall and Tazz. Returning to the label for a second solo outing is Maxwell Church, who does not fuck about one iota with his to-the-point Lab.our 04 EP. All three cuts are raw, heavyweight bangers obscured by billows of thick smoke; nerve-jangling sirens, muted acid scribbles and swaggering dubwise undercurrents that make you want to pump your fist even whilst sat at a desk.

If fucked up acid is your thing, then one of the month’s most blistering uses of the 303 comes from a master of the form in Jared Wilson. The Detroit man steps away from his usual Skudge home to serve up the kinked, filtered heavy lacerations of ‘Best Game’ as part of Music for Visionaries 0.01, a Various Artists EP on London’s Cinematic label. Making up the other three contributions are deep drone house dude XDB with the hunched and shuffling rhythms of fuggy effort ‘Violi’; former Balance Recordings associates City 2 City with their nostalgic and widescreen Chicago love letter ‘Way of Life’ ;and label boss Soy Mustafa, whose smeared pads, jittery percussive rattles and deep sense of soul betray a studio full of proper hardware and a man who actually knows how to use it.

Last but not least this month, the underrated Spencer Parker and his equally under-the-radar label, Work Them, unleashes some fine remix action. Tackling tracks from Parker’s own recent The Moment Not The Memory EP, both FXHE alumni Aaron ‘FIT’ Siegel and Hardwax favourite Answer Code Request come up trumps.  The former turns ‘Faster Forward’ into a trance imbued hair-raiser with seductively dangling hi hats and layer upon layer of sombre piano lushness, whilst the latter opts for a more slowly percolating and ever rising version of ‘Spacial’ that locks you in its airy and frictionless rotations for almost six hypnotic minutes.  Sublime stuff.