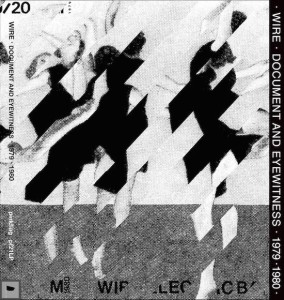 Approaching Wire’s catalogue retrospectively can be a strange experience. I came to them, as many, via Elastica and Britpop, hoovered up the arch punk of Pink Flag, the cryptic art-pop fragments of Chairs Missing and the whooshing Eno moves of 154, and then stumbled out of the canon, enjoying the stout industrial-punk clangour of their new material and snapping up their less lauded late 80s fare whenever I saw it languishing in a second hand rack. So I’m a fan pretty much; but it says a lot about the reputation of Document And Eyewitness: 1979-80 that I’m not even sure that I knew that it existed. Indeed, there are some who are perhaps keen to forget. Geoff Travis of Rough Trade – who released this collection of live recordings back in 1981 – apparently thinks the band are “completely mad” to consider re-releasing it. And of course by now, Geoff Travis probably knows a thing or two about releasing records, whatever Morrissey reckons.

But Wire know what they’re up to, too, and it’s worth remembering a certain obstreperousness was always part of their design: as Colin Newman once put it, they were the fly in the ointment. The performances collected on Document And Eyewitness: 1979-80 – taken from a conventional live performance at the Notre Dame Hall, an infamous Dadaist show at London’s Electric Ballroom and a single song, ‘Heartbeat’, from a show supporting Roxy Music in Montreux in March ’79, with a bit of demo and rehearsal footage tacked on the end – capture the band not so much in a state of self-destruction as a state of self-deconstruction.

The Electric Ballroom, in particular, sounded like a divisive one. As the punks chanted for the hits, Wire mixed brand new, often under-rehearsed work with surreal cabaret moves, taking to the stage in beekeeper’s veil or Morris dancer bells, with guest interventions including illuminated geese or a man beating a gas cooker with a hammer. The traditional pitfalls of the live performance – awkward reception to new material, ropy sound quality, stultifying stage banter – is focused on, then amplified for effect. Crowd favourite ‘12XU’ is introduced with the rambling blarney of a washed-up compère, and on record, at least, it’s cut back with decimating tape splices and inserted commentary. “I don’t need to go to the Arctic to know it’s cold,” says a voice, apropos of little.

And yet, it’s still Wire, and amidst their intellectual unruliness and self-sabotage, good ideas flourish. On the cacophonic clamour of ‘Underwater Experiences’, we hear the smoothness of 154 is scoured away by no-wave guitar assault and demented call-and-response; meanwhile, ‘Instrumental (Thrown Bottle)’ and ‘Eastern Standard’, excursions in delicately surreal post-rock, appear to have dated rather well. The Notre Dame set boasts slightly tighter performances, slightly rougher recording quality, and an energy the Electric Ballroom probably consciously lacks: ‘Witness To The Fact’ and a take on 154’s ‘2 People In A Room’ are dispatched at a tenor approaching frenzy. Present too are some primitively wiggy electronic effects, employed with the enthusiasm of one who gets a kick out of freaking out the squares. They’re plastered all over ‘Go Ahead’, on which we hear a scathing Colin Newman critique the reviews before they’ve even been written: “Critical acclaim can not explain the extent of the sales/And why this one pales in comparison/In comparison with what/You may well ask…”

If you want “classic” Wire, and you’re looking for something salvageable, is there anything here for you? Well, yes: ‘Our Swimmer’ is a lightly propulsive gem, a sort of motorik for the trunks-and-goggles brigade, and is presented both live, in single form, and sped up as ‘Second Length (Our Swimmer)’, all pretty essential. Elsewhere, how you find Document And Eyewitness will depend on your appetite for artistic bloody mindedness. Still, if you’re a fan of Wire, you’ll know it can be moreish.