Busdriver on Busdriver: The L.A. cult hero talks us through his career album-by-album 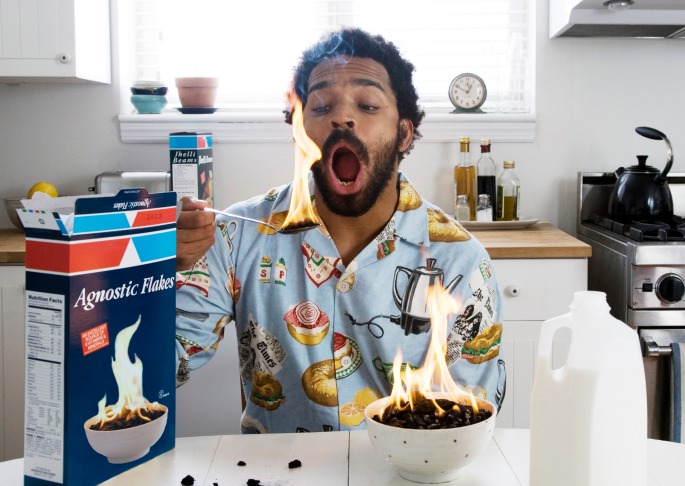 During our recent interview with L.A. alt.rapper Busdriver in Los Angeles, we asked him to run through his extensive discography blow-by-blow.

We spent some of our conversation fishing for memories and stories around the seven solo albums he’s released up to now (his eighth, Perfect Hair, is out this month) as well as two collaborative albums – The Weather with Radioinactive and Daedelus, and Flash Bang Grenada with Nocando.

What follows are on-the-spot quotes from Busdriver, with absolutely no pre-planning from either of us.

This is my first album proper. I recorded some of that on a program called Cubase. It was an interesting time. I made the whole album in the C.V.E Shack, south central L.A. They produced most of it. I was working as a PA at the time so I would go there really late at night and work on songs. So it was all done at night and I played Goldeneye before and after the sessions, but usually after. That was pretty much what it was like to make Memoirs…

I met Will Ashton through that record, that’s when I became aware of Big Dada. Daddy Kev recorded the album. I recorded ‘Imaginary Places’ in Echo Park in the little shitty apartment Kev was living in. I was in the mic room, which was his bedroom. He had a huge pile of laundry! I don’t want to put Kev out there but it was a different time. Kev’s life is way different now, but it was that time. It was bachelor Kev. So it was him, me, a mic and a pile of laundry. Kev made that album, it was supposed to go out through his label, Celestial, but it folded so I put it out on Temporary Whatever. That was a label name I came out with on the spot, cos Kev asked me, “what’s the name of the label?” “Temporary… whatever!” He wrote it down and that became it. Thanks Kev for putting me on the spot.

I met Mush Records through working on Temporary Forever. Carlos Nino introduced me to Daedelus. He brought me to his house. We met to work on his first record and that went well. So I asked him if he wanted to do The Weather with myself and Radioinactive and he said yes. His process at the time was very whimsical. His studio was this long room with all his records, books and discarded keyboards, Juno and all sorts of things, and a command post at the end of the room. It was my first foray into non-linear song writing, programming and breaking things up into time signatures. Things like changing the one in the song arbitrarily. It was very eye-opening. It’s how I learnt to produce. Daedelus is the guy who taught me how to make the crappy beats I make now, I just looked over his shoulder, I’d watch him work. It informs how I write things to this day. Very random. Super formative record.

That’s another record I did with Kev. I feel it was more of a by-product of his efforts at the time. He had a bunch of rap records with a bunch of big samples, a lot of jazz-themed albums. He did three: one with Grouch, one with Awol One and one with me. Kev said, “let’s do it quickly”, so we did. It took a week or two. It was about… it was the first record I made about relationship shit. Kev played guitar on the last song on that record too. This was the second record I worked on with D-Styles after Temporary Forever. It was crazy. Those albums are the only time I’ve had to write songs and leave long blocks free for scratch solos. Let D solo forever! Let him go! I’ve never had another record where I had to do that, where that idea was key to some of the songs. He would murder it. It was the best part of the song. That was the same time he was doing Gunkhole, and really in hindsight I was super spoiled. I mean D-Styles? One of the best ever. When you’re talking cutting and phrasing, he’s someone that’s on top of shit. D would do some amazing shit, and the fact he was down was a no brainer.

That was my first proper record on Mush, I didn’t really call on Kev or D for this one. It was a big deal, I was trying to be grown up. And I was dealing with a lot of racial shit on that record too. I was dealing…I felt slighted cos I felt that white rappers were being given more shine cos of the accessibility of their story. That was when Atmosphere and Def Jux were coming out in full force. After working with Daedelus, I had him produce half of that record because I was completely taken by what he was able to do.

Roadkill was a really interesting time. It was my first major label record, it was very exciting. Boom Bip was such a… he was a very respected guy in the UK and had this foreign air to him, so working with him felt like it presumed a certain effort. I needed that formal setting. Even Nobody, at the time he was… he’s one of the only beat makers I know who’s also a real producer. Nobody is from the Good Life and Blowed era, he knows rap, he knows everything about it, so he would coach me, which is a rare thing. Beat makers don’t do that these days. But he would do that, and the whole process was so dope. I felt so taken care of by these two. At the time they were really in touch with it all. Kev mixed the record, and he was really into it. He was excited. It was a great circumstance, one of the better ones in making a record. There was money and Nobody was trying to go there sonically, to the styles he’s more known for now.

That was also the beginning of Low End Theory. Kev had a weekly at The Echo before Low End that failed. So he was trying to do this new thing, and he asked Nobody while we were mixing the record. And that was literally the beginning of the booking entity of Low End Theory. What Nobody was pulling from for the record was all around us: Flying Lotus’ first record for Plug Research, his remix of Mia Doi Todd that was freaking everyone out at the time, guys like DNTEL, that whole community informed the record in a way. It was an interesting time. Nobody had that standing and so did Boom Bip, it was really dope.

That record was hard to make. I made it with Kev again, he engineered it. It was tough cos I felt pressured. I felt a lot of pressure. I worked with Nobody and Daedelus on it. I wanted to bring it back, do some ill super rap shit. We recorded a lot of songs, did a lot of takes. But I really like the record. I think what came out of it was really good. There’s a lot of crazy shit on it. But I’m proud it exists. I did a song on there called ‘Me-Time’ which is one of the only songs I’ve ever done on a record that’s specifically pandering to an audience. I felt a lot of pressure to return to Temporary Forever type stuff, I felt pressure to go super-pop but I didn’t know how to do that. So I just did super rap shit. ‘Me-Time’ was one of the hardest songs to do, it was like, “hey I’m still good!” That record also afforded me the chance to work with a lot of people like Nosaj Thing and Free The Robots.

Working with Jason [Nosaj Thing] during the first few years of his career was really interesting. I literally saw his career start. He was working tech support for a gear company but then he lost his job. And that’s when we started touring, he was in my band for three months. So we toured, doing Busdriver shit while he was in limbo, figuring shit out. It was a weird time, but then his record came out and boom. It all changed for him. It was really interesting fucking with him at that time, I got to understand what Ableton was about. He’s a master of that shit. Watching him use it, especially when he was making Drift, it was mind blowing. I didn’t fully appreciate how incredibly together he had it. Well I did, but I didn’t realise it properly. When you listen to Jason’s music in his studio, in his environment, it’s like ‘ugh’. He knows how to set up his shit. You’re washed over by sonic gorgeousness. It kinda compartmentalised a lot of stuff for me: you do that, and I’ll do the hard rap shit. I could have taken Jason differently then, I coulda been like “I need to fuck with Jason” but he fucked with me, that’s how I put it to myself. I like the record and what I did with Jason. And it was my last record on ANTI.

That’s me loving Hellfyre Club and loving the idea. Being with Nocando. That’s also when I thought the line between underground and top 40 shit was blurring. We were lampooning a lot of shit on the record but not because we didn’t respect it, rather because we thought musical tropes were doing that. It was fun. It’s so fun to rap with James, he’s so clever and talented.

That was the break up album. I wanted to indulge emotive stuff in my life, and people seemed to like that. I think albums are an interesting format to do that kind of stuff and I wanted to see how it would translate. It was really about pulling myself out of the muck too. I felt really bad after leaving ANTI, I tried to go back to them and they were like ‘no.’ I felt bad about it because it was a big record deal, it was a big deal. So it was either going to be the end or the rebirth of Busdriver. It was the reinvention. I didn’t intentionally reinvent though. I just didn’t mire myself in anything I’d done previously. I went back to how I felt when I heard Jason’s music. I knew there was all this shit going on and I needed to delve more into it. Delve into the different sonic realms and pockets that people were mining. I told myself I needed to do that more often. That’s what Beaus$Eros came out of.